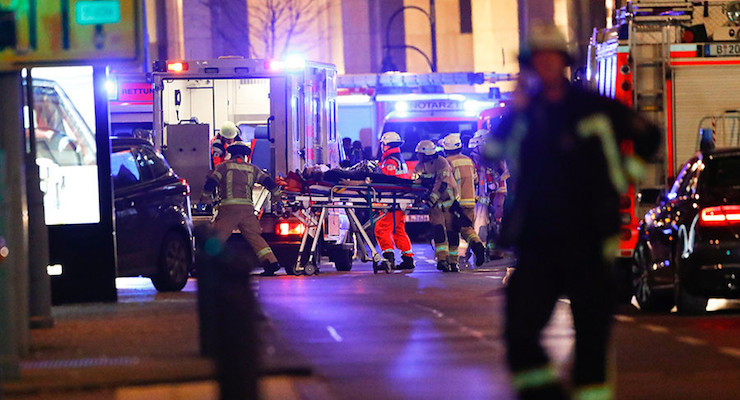 Paramedics work at the site of an accident at a Christmas market on Breitscheidplatz square near the fashionable Kurfuerstendamm avenue in the west of Berlin, Germany, December 19, 2016. (Photo: REUTERS)

Whenever mass shootings occur, some people quickly jump to conclusions before there’s any evidence. Folks on the right are occasionally guilty of immediately assuming Islamic terrorism, which is somewhat understandable. Folks on the left, meanwhile, are sometimes guilty of instinctively assuming Tea Party-inspired violence (I’m not joking).

I confess that I’m prone to do something similar. Whenever there is a terrorist attack, I automatically wonder if we’ll find out welfare payments and other goodies from the government helped subsidize the evil actions.

In my defense, there’s a reason I think this way. Whether we’re talking about Jihadi John or the Tsarnaev brothers, there are lots of examples of dirtbag terrorists getting handouts from taxpayers.

It happens a lot in other nations. And it’s now happening with disturbing frequency in the United States.

It’s even gotten to the point where I’ve created a special terror wing in the Moocher Hall of Fame. And, as more evidence accumulates, the medieval savage who drove a truck through a Christmas market in Germany may be eligible for membership.

Here’s some of what we know, as reported by the Daily Caller.

Amri, the Tunisian refugee who killed 12 and injured 48 at a Christmas market in Berlin Dec. 19… The investigation was closed in November because Amri’s whereabouts were unknown. …Welfare is a common way for terrorists to fund their activities in Europe.

The U.K.-based Express reveals that the terrorist was very proficient at ripping off taxpayers before deciding to kill them.

Despite being shot dead in Italy just days after the attack, the Tunisian refugee is now under investigation for fraud after conning German authorities into handing over cash to fund his terror exploits. After travelling from Tunisia to Europe in 2011, he used up to eight different aliases and several different nationalities – at times even claiming to be from Egypt or Lebanon. Reports claim Amri carried several different false identity documents and used aliases to collect welfare in cities across Germany.

The story also has details on how welfare payments subsidized previous terrorist actions.

Welfare fraud was key to funding terror attacks in Brussels in March and in Paris last year. Terrorists collected around £45,000 in benefits which they used to pay for the brutal attacks in the major European cities. …Meanwhile, Danish authorities came under fire recently after it emerged 36 Islamic State fighters continued to receive benefits for months after leaving the country to join other members of the brutal regime in Syria and Iraq.

And while I’m not sure RT is a legitimate news source, it says Amri used 14 identities for mooching.

Anis Amri, the Tunisian man accused of driving a truck into a crowd of Christmas market shoppers in Berlin, used at least 14 different identities, a German police chief said. …Among other things, this allowed the man to receive social benefits under different names in different municipalities, the police chief said.

A close associate (and suspected co-conspirator) of Amri also was mooching off the system according to news reports.

A spokeswoman for the office of Germany’s chief prosecutor on Wednesday said authorities have taken a second Tunisian suspect into custody following raids in Berlin on Tuesday. …However, she added that there was insufficient evidence to charge the suspect. In a separate statement, the federal prosecutor’s office announced the man had been charged with committing social welfare fraud and would remain in custody. …the suspect had previously been detained on suspicion of supplying explosives intended for a prospective attack in Dusseldorf. …The 26-year-old suspect allegedly had dinner with Amri at a restaurant the night before the attack, according to Köhler. The suspect allegedly met Amri in late 2015. “Süddeutsche Zeitung” reported that the two men traveled together from Italy to Germany that year.

Gee, sounds like a model citizen. Merkel must be proud of her caring and sharing welfare state.

Last but not least, a story in the U.K.-based Telegraph has some added details on the sordid history of welfare-funded terrorism in Europe.

The jihadists suspected of carrying out the bomb and gun attacks in Paris and Brussels used British benefits payments to fund international terrorism, a court has heard. …Zakaria Bouffassil, 26, from Birmingham is accused of handing over the cash which had been withdrawn from the bank account of Anouar Haddouchi, a Belgian national, who had been claiming benefits while living in the West Midlands with his wife. Kingston Crown Court heard how thousands of pounds of taxpayers’ money continued to be paid into Haddouchi’s bank account, even after he had left Britain for Syria and had begun fighting for Islamic State in Iraq and Levant (Isil). …On the opening day of their trial, jurors heard how some of the most notorious and wanted terrorists in Europe had used British taxpayers’ money to fund their activities in Syria and elsewhere.

Though I suppose I shouldn’t say “sordid history.” This is more like societal suicide. After all, we’re not talking about welfare payments for a tiny fraction of terrorists. It really is a theme. 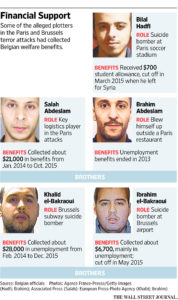 I linked to some examples above, and if you want more evidence, click here and here.

By the way, I’m not claiming that welfare causes terrorism. Though I do wonder if Mickey Kaus has a point when he does make that link.

…extreme anti-social terrorist ideologies (radical Islam, in particular) seem to breed in “oppositional” cultures supported by various government welfare benefits. …The social logic is simple: Ethnic differences make it easy for those outside of, for example, French Arab neighborhoods to discriminate against those inside, and easy for those inside to resent the mainstream culture around them. Meanwhile, relatively generous welfare benefits enable those in the ethnic ghetto to stay there, stay unemployed, and seethe. Without government subsidies, they would have to overcome the prejudice against them and integrate into the mainstream working culture. Work, in this sense, is anti-terrorist medicine.

I don’t particularly like government-provided welfare of any kind, but I definitely think there should be strict rules against handouts for immigrants. And if that makes them less susceptible to terrorist ideologies, that’s a big fringe benefit.

P.S. It goes without saying that politicians aren’t trying to subsidize terrorism. It’s just a byproduct of bad policy. They do, however, explicitly and deliberately subsidize terrorism insurance for big companies. A rather unique example of corporate welfare.

A Secret Glimpse at Life Inside a Bureaucracy