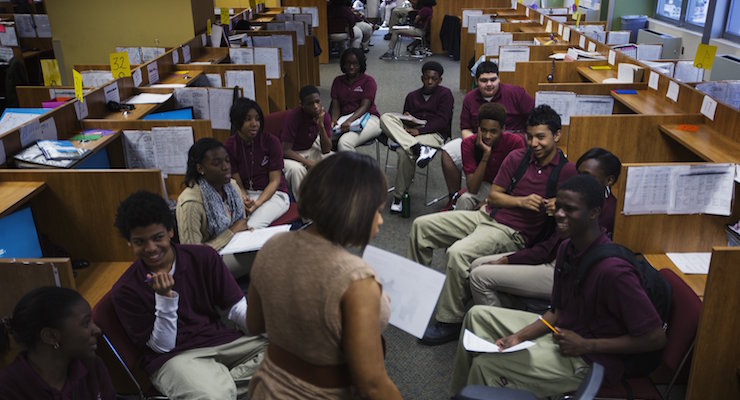 The story of the private sector is that competition generates ever-more output in ways that bring ever-higher living standards to ever-greater numbers of people.

By contrast, the story of the government is inefficiency and waste as interest groups figure out how to grab ever-larger amounts of unmerited goodies, often while doing less and less.

Sadly, the government seems to be most inefficient in areas where we all hope for good results. Education is a powerful (and sad) example.

A story in the LA Weekly is a perfect illustration of this phenomenon.

A little more than a decade ago, something unexpected happened. The district’s enrollment, which peaked in 2004 at just under 750,000, began to drop. …Today, LAUSD’s enrollment is around 514,000, a number that the district estimates will fall below half a million by 2018.

Anyone want to guess whether this means less spending?

L.A. Unified’s costs have not gone down. They’ve gone up. This year’s $7.59 billion budget is half a billion dollars more than last year’s. …Today, the district has more than 60,000 employees, fewer than half of whom are teachers. …LAUSD’s administrative staff had grown 22 percent over the previous five years. Over that same period of time, the number of teachers had dropped by 9 percent.

If these trends continue, maybe we’ll get an example of “peak bureaucracy,” with a giant workforce that does absolutely nothing!

Based on his famous chart, the late Andrew Coulson probably wouldn’t be too surprised by that outcome.

It was such a failure than even a story in the Washington Post admitted the money was wasted (in other words, there wasn’t enough lipstick to make the pig look attractive).

One of the Obama administration’s signature efforts in education, which pumped billions of federal dollars into overhauling the nation’s worst schools, failed to produce meaningful results, according to a federal analysis. Test scores, graduation rates and college enrollment were no different in schools that received money through the School Improvement Grants program — the largest federal investment ever targeted to failing schools — than in schools that did not. …The School Improvement Grants program…received an enormous boost under Obama. The administration funneled $7 billion into the program between 2010 and 2015… Arne Duncan, Obama’s education secretary from 2009 to 2016, said his aim was to turn around 1,000 schools every year for five years. ..The school turnaround effort, he told The Washington Post days before he left office in 2016, was arguably the administration’s “biggest bet.”

It was a “bet,” but he used our money. And he lost. Or, to be more accurate, taxpayers lost. And children lost.

Some education experts say that the administration closed its eyes to mounting evidence about the program’s problems in its own interim evaluations, which were released in the years after the first big infusion of cash. …Smarick said he had never seen such a huge investment produce zero results. …Results from the School Improvement Grants have shored up previous research showing that pouring money into dysfunctional schools and systems does not work.

Gee, it’s almost as if a social scientist (or anybody with a greater-than-room-temperature IQ) could draw a logical conclusion from these repeated failures.

And, to be fair, some folks on the left have begun to wake up. Consider this recent study by Jonathan Rothwell, published by Brookings, which has some very sobering findings.

…the productivity of the education sector depends on the relationship between how much it generates in value—learning, in this case—relative to its costs. Unfortunately, productivity is way down. …This weak performance is even more disturbing given that the U.S. spends more on education, on a per student basis, than almost any other country. So what’s going wrong? …In primary and secondary public education, where price increases have been less dramatic, there has been a decline in bureaucratic efficiency. The number of students for every district-level administrator fell from 519 in 1980 to 365 in 2012. Principals and assistant principals managed 382 students in 1980 but only 294 in 2012.

The conclusion is stark.

Declining education productivity disproportionately harms the poor. …unlike their affluent peers, low-income parents lack the resources to overcome weak quality by home-schooling their children or hiring private tutors. Over the last 30 to 40 years, the United States has invested heavily in education, with little to show for it. The result is a society with more inequality and less economic growth; a high price.

Incidentally, even private money is largely wasted when it goes into government schools. Facebook’s founder famously donated $100 million to Newark’s schools back in 2010.

So how did that work out? As a Washington Post columnist explained, the funds that went to government schools was basically money down the toilet.

It is a story of the earnest young billionaire whose conviction that the key to fixing schools is paying the best teachers well collided with the reality of seniority protections not only written into teacher contracts but also embedded in state law.

But there is a bit of good news. Some of the money helped enable charter schools.

there is a more optimistic way to interpret the Newark experience, much of which has to do with the success of the city’s fast-growing charter schools. …The reasons are obvious. Unencumbered by bureaucracy and legacy labor costs, charters can devote far more resources to students, providing the kind of wraparound services that students like Beyah need. An analysis by Advocates for Children of New Jersey noted “a substantial and persistent achievement gap” between students at charter and traditional public schools: “For example, while 71 percent of charter school students in Newark passed third-grade language arts tests in 2013-14 — higher than the state average of 66 percent — only 41 percent of students in Newark traditional public schools passed those tests.”

The Wall Street Journal also opined about this topic.

‘What happened with the $100 million that Newark’s schools got from Facebook’s Mark Zuckerberg?” asks a recent headline. “Not much” is the short answer. …The Facebook founder negotiated his gift with New Jersey Gov. Chris Christie and then-Mayor Cory Booker in 2010, and it flowed into Newark’s public-school system shortly thereafter. The bulk of the funds supported consultants and the salaries and pensions of teachers and administrators, so the donation only reinforced the bureaucratic and political ills that have long plagued public education in the Garden State.

The editorial explains that this isn’t the first time a wealthy philanthropist squandered money on government schools.

In 1993, philanthropist Walter Annenberg sought to improve education by awarding $500 million to America’s public schools. …But the $1.1 billion in spending that resulted, thanks to matching grants, accomplished little. An assessment by the Consortium on Chicago School Research on the schools that received funds reached a dismal conclusion: “Findings from large-scale survey analyses, longitudinal field research, and student achievement test score analyses reveal that . . . there is little evidence of an overall Annenberg school improvement effect.” The report did not explain why the campaign failed, but the reason is fairly obvious: The funds wound up in the hands of the unions, administrators and political figures who created the problems in the first place.

Fortunately, not all rich people believe in wasting money. Some of them actually want to help kids succeed.

In 1998, John Walton and Ted Forstmann each gave $50 million to fund scholarships for low-income children to attend private schools. More than 140,000 students have attended schools with graduation and college matriculation rates that exceed 90% instead of going to the failing schools in their neighborhoods. Earlier this summer, hedge-fund manager John Paulson pledged $8.5 million to the Success Academy charter-school network, where 93% of students are proficient in math, compared with 35% of their traditional public-school peers. His gift will allow more such schools to open. The financier Stephen Schwarzman and his wife, Christine, a former attorney, donated $40 million to help endow the Inner-City Scholarship Fund, which provides financial aid to needy children attending Catholic schools in the Archdiocese of New York.

Which is a good segue into the real lesson for today about the type of reforms that actually could boost education.

I’ve shared in the past very strong evidence about how school choice delivers better education results.

Which is what everyone should expect since competition is superior to monopoly.

Well, as explained in another Wall street Journal editorial, it also generates superior results at lower cost. Especially when you factor in the long-run benefits.

…a study shows that Milwaukee’s landmark voucher program will save taxpayers hundreds of millions of dollars. …the Wisconsin Institute for Law and Liberty, a nonprofit that advocates for limited government and education reform, decided to look at the relative cost and benefits of choice schools. And, what do you know, it found that students participating in Milwaukee’s voucher program will provide the city, state and students nearly $500 million in economic benefits through 2035 thanks to higher graduation and lower crime rates. …More education translates into higher incomes, more tax revenue and a lower likelihood of reliance on government welfare or other payments. Meanwhile, greater economic opportunity also prevents young adults from turning to crime.

Wow. It’s not just that it costs less to educate children in private schools. There’s also a big long-run payoff from having more productive (and law-abiding) citizens.

That’s a real multiplier effect, unlike the nonsense we get from Keynesian stimulus schemes.