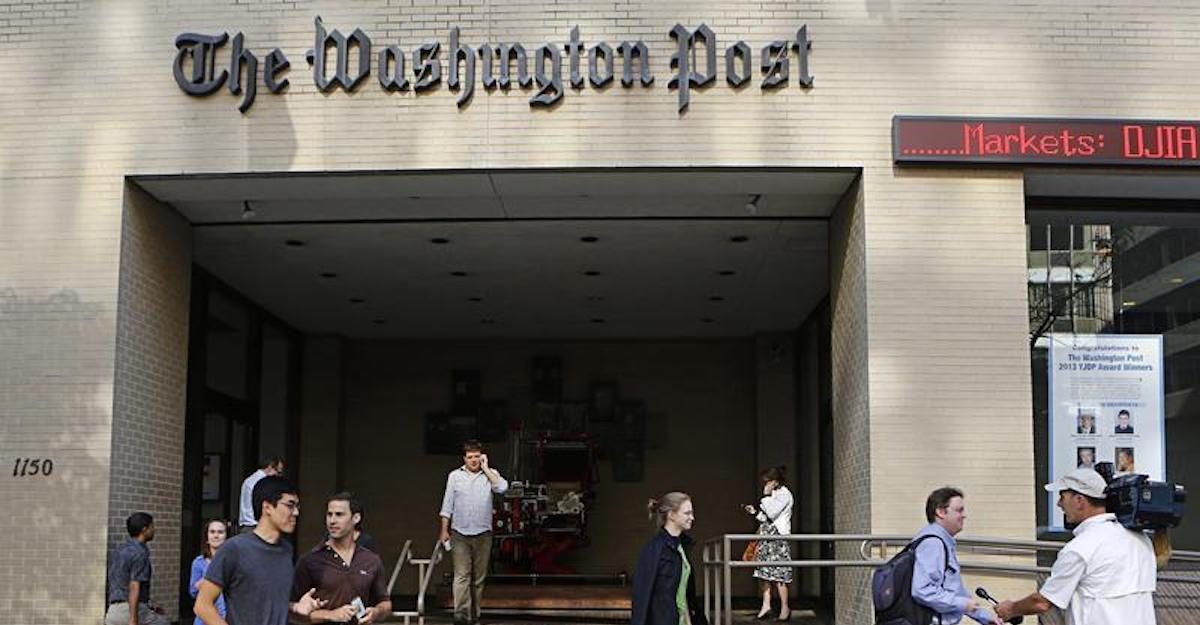 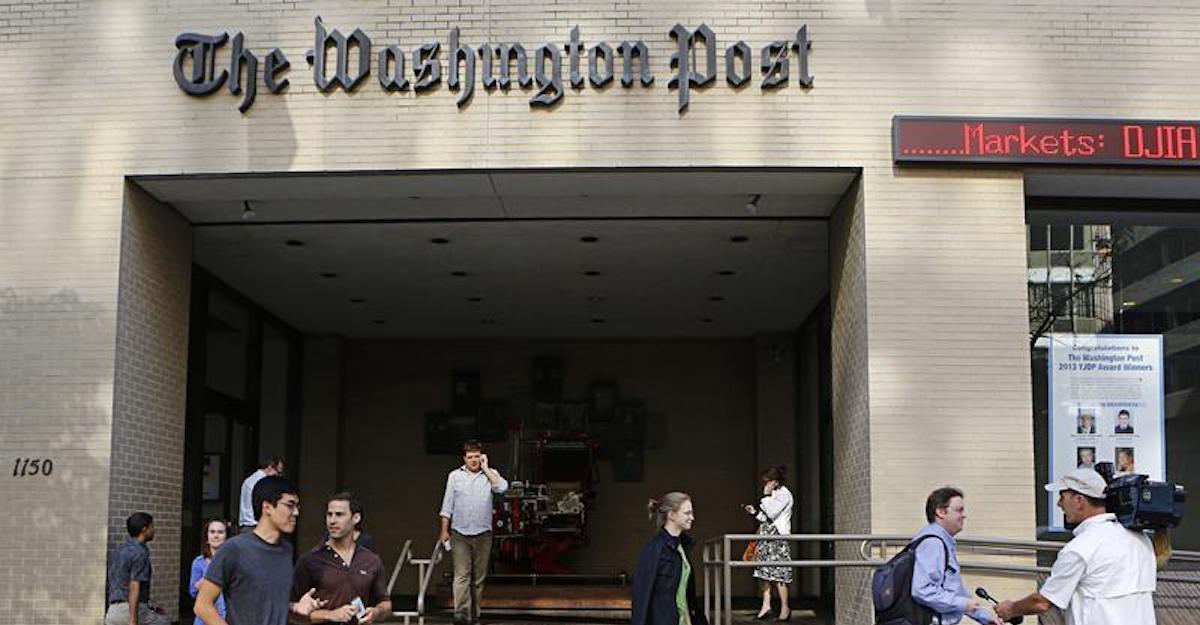 A television cameraman takes up a position as people walk by the entrance of the Washington Post headquarters in Washington, August 5, 2013. (Photo: Reuters)

I don’t focus much on media bias because journalists generally aren’t dishonest. Instead, they choose which stories to highlight or downplay based on what advances their political agenda. Though every so often I’ll highlight an example of where bias leads to an egregious — maybe even deliberately dishonest — mistake.

Now we have an addition to that collection from a WonkBlog column in the Washington Post. The piece starts with an accurate observation that the tax plan on Capitol Hill isn’t a long-run tax cut.

Senate rules require the Tax Cuts and Jobs Act not to add to the federal deficit after 10 years. …The bill aims to cut corporate taxes in perpetuity…but they actually need to raise money to offset the permanent corporate tax reduction.

Yes, as I wrote two weeks ago, the long-run tax cuts have to be offset by long-run revenue increases. So that part of the column is fine.

We then get this rather dubious assertion.

Republicans are paying for a permanent cut for corporations with an under-the-radar tax increase on individuals.

In part, it’s a dodgy claim because there are provisions in the bill that collect more revenue from companies, such as the partial loss of interest deductibility and various base erosion rules. So if he wanted to be accurate, the author should have begun that sentence with “Republicans are partially paying for…”

But that’s only part of the problem. As you can see from this next excerpt, he cites a former Democrat staffer and doubles down on the allegation that individual taxpayers will be coughing up more money to Uncle Sam because of the legislation.

This chart, playing off what the Senate’s former top tax aide and New York University professor Lily Batchelder pointed out on Twitter on Friday evening, makes vividly clear where Republicans ultimately raise that money. …we know it’s individual taxpayers who ultimately bear the cost of the tax bill.

And here’s the chart that ostensibly shows that you and me are going to pay more money so evil corporations can enjoy a tax cut.

Notice, however, the part I circled in green. It shows that Republicans are repealing Obamacare’s individual mandate as part of their tax reform plan, and it also shows that repeal has budgetary effects.

So, how is this a tax increase — the pink portion of the bar chart — as the Washington Post wants us to believe?

Needless to say, the honest answer is that it isn’t a tax hike. Getting rid of the mandate means people won’t get “fined” by the Internal Revenue Service (IRS) if they choose not to buy health insurance. If anything, that should count as a tax cut.

But that’s not what’s represented by the pink part of the bar chart. Instead, it shows that when you get rid of the mandate and consumers choose not to get Obamacare policies, that automatically means that insurance companies will get fewer subsidies from Uncle Sam. Getting access to that cash was one of the reasons the big insurance companies lobbied for ObamaCare.

In other words, the chart actually is showing that corporate rate reduction is partially financed by a reduction in spending, which is a win-win from my perspective.

At the risk of stating the obvious, an “outlay effect” is when a change in law causes a shift in government spending. That’s what’s happening, not a tax increase on individuals.

By the way, the author sort of admits this is true in a passage buried near the bottom of the column.

…a number of analysts argue that it’s wrong to consider the loss of insurance related to the end of the ACA mandate a tax increase, because it reflects individuals’ choice not to get insurance.

That’s a pathetic attempt at justifying a dishonest article.

Sadly, most readers will have no idea that they were deliberately misled.

P.S. The “alternative inflation measure” in the bill (the red portion of the bar chart) arguably is a tax increase. Or, for those who persuasively argue that it’s a more accurate measure, it’s a provision that will result in individual taxpayers sending more money to Uncle Sam compared to current law since the new measure (chained CPI) will result in smaller inflation adjustments to tax brackets and the standard deduction.

P.P.S. If repealing just one small piece of ObamaCare will save about $300 billion over the next decade, imagine how much money we could save if the entire law was repealed.