The IRS Scandal Resurfaces With Damning Emails From Lois Lerner

It wasn’t too long ago that the White House was embattled in several scandals, including the IRS scandal targeting Tea Party and other conservative groups. President Obama decided to change the narrative as every president drowning in scandal has done before him, bomb someone. But new emails leaked by the Ways and Means to the Wall Street Journal, are damning to Lois Lerner, and since Washington bureaucrats do not take such huge undertakings on their own, the administration.

On February 1 of 2011, an email message to – and others – Obama donor and IRS executive Holly Paz, Lerner writes: “Tea Party matter very dangerous. This could be the vehicle to go to court on the issue over whether Citizen’s United overturning the ban on corporate spending applies to tax exempt rules . . . Cincy [Cincinnati] should probably NOT have these cases – Holly please see what they have please.”

It should concern and disturb every American profoundly to read how bureaucrats like Lerner are working behind the scenes to undermine the First Amendment. The Citizen’s United ruling, despite the lies from proponents of big government, significantly expanded free speech rights and insulated political speech from government control. For partisan bureaucrats like Lerner and politicians bent on expanding government control, it was a disaster.

Of course, we all remember President Obama’s unprecedented disrespect during the State of the Union, in which he criticized the Supreme Court and made the oft-incorrect claim that the ruling allows overseas donors to decide our elections. Justice Alito is visibly seen saying, “not true,” as he shakes his head back-and-forth.

Sent on July 10, 2012, as the 2012 election season kicked-off and before Democrats made their turnaround, Lois Lerner responded to an article forwarded to her noting Democratic complaints that anonymous donors could be influencing Senate races. 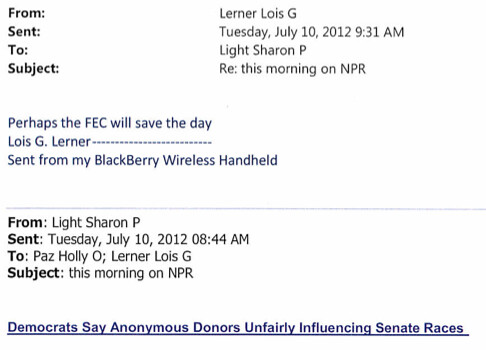 Lerner’s response is, “Perhaps the FEC will save the day.”

Save the day from who and what? Mitt Romney, a Republican-controlled Senate, Democratic losses? The First Amendment and the free speech that – unfortunately for them – comes along with it? Probably. The joint research conducted by Stan Vueger of AEI, Andreas Madestam of Stockholm University, Daniel Shoag and David Yanagizawa-Drott (both from the Harvard Kennedy School) concluded that the IRS targeting cost the Republican Party between 5 – 8 million votes during the 2012 election.

There can be little doubt that Lois Lerner lied to the public when she stated in her initial apology on May 10, 2013. Lerner’s explanation for the IRS scandal, which claimed the targeting of conservative groups centered around “our line people in Cincinnati,” was a flat-out lie. This always was and still is a Washington-based scandal, with senior IRS officials knee-deep alongside Obama donors.

Holly Paz, then-director of the Office of Ruling and Agreements, was a donor to the Obama campaign, but now we also know that Democratic complaints were of a personal crusade for Lois Lerner. In fact, it was of such importance, she hoped that the Federal Election Commission would “save the day.”

The IRS – alongside the EPA – is one of the most powerful, influential, and intrusive bureaucracies in the federal government. Bureaucrats should not be taking positions against free speech, or any other policy that they shouldn’t even have a position on for that matter. Not only have they broken this fundamental aspect to our social contract, but they feel zero accountability toward the American people for their actions. And this is the arm of the government that will be enforcing Obamacare and data mining your medical information.

Jay Sekolow, Chief Counsel of the American Center for Law and Justice, said it best in his latest article opining on the new revelations. He writes, “The IRS is partisan, it’s corrupt, and its leaders don’t tell the truth. And if the media or the Obama administration won’t hold the IRS accountable, we will.”