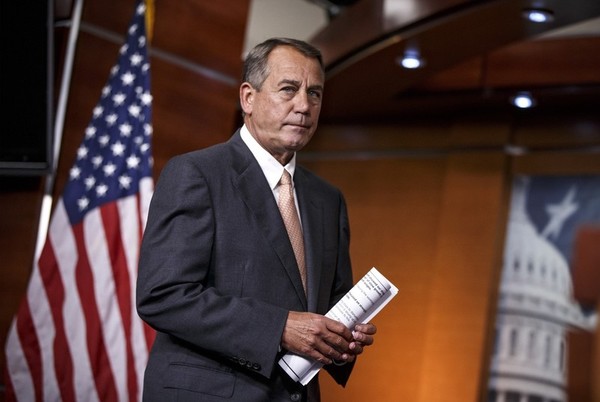 Speaker of the House John Boehner, R-Ohio, arrives for a news conference at the Capitol, in Washington, Thursday, Sept. 12, 2013. Boehner says he feels insulted by a New York Times opinion piece written by Russian President Vladimir Putin who chided Americans for seeing themselves as “exceptional.” (AP Photo/J. Scott Applewhite)

UPDATE: Speaker Boehner made good on his word when he said that the House would vote on a continuing resolution (CR) that included a provision to defund Obamacare.

House Speaker John Boehner, R-Ohio, said the House will vote on a bill this week to avoid a government shutdown that includes a provision to defund Obamacare. In addition to extending government spending for about another couple of months and defunding Obamacare, the bill also locks in the low spending levels set earlier this year by the sequestration, which never did cause the sky to fall on the American people.

“It’s time to protect families from this unworkable law,” he said. Sound as if the Speaker has been reading our columns, getting calls from Don’t Fund It supporters, and the latest poll results showing him in trouble in his own district.

In Letter to GOP Leadership: Defund Obamacare As Most American Want, Or Get Packing, I gave a detailed argument grounded in the latest public opinion, and it offers a blistering rebuke of the establishment logic. Support for Obamacare is consistently nil, and Americans say they are willing to have a partial government shutdown, because the majority of Americans want to turn back the clock to pre-Obamacare healthcare.

The mainstream media and the Washington political establishment maintain that the continuing resolution (CR) can pass in the GOP-led House, but it will surely fail in the Democratic-led Senate. So, then why has Senate Majority Leader Harry Reid D-NV, refused to allow a single vote to repeal or defund Obamacare proceed in the Senate if they are so sure? Obama says he won’t negotiate on the debt ceiling, but by a 2 – 1 margin, Americans oppose raising the debt ceiling and favor a federal budget that cuts spending – a view shared by 34% of Democrats who are “very concerned” about Obamacare being implemented.

President Obama made another equally ridiculous statement, or rather a far-fetched hypothetical.

Speaking to the Business Roundtable, Mr. Obama said to “flip the script” and imagine a Democratic majority that refused to increase the debt limit — threatening to “default on the debt and cause a worldwide financial crisis,” the president said — unless corporate taxes were increased by 20%. Obama’s comment underscores his misunderstanding of the issues, or in other words, his ignorance.  There happens to be one major difference between the two policies in his little analogy. Drastically increases corporate taxes in an anemic economy would hurt Americans almost as much as passing a behemoth government takeover of healthcare.

He also said, “That can’t be a recipe for government. “It would fundamentally change how government functions.” Mr. Obama is the one who has already fundamentally changed how government functions, as in, it doesn’t anymore. Government has never before so incompetent and gridlocked as it has been under Barack Obama. Contrary to the intellectually deficient arguments from the left, it has nothing to do with race. Rather, it has everything to do with the incredibly shrinking “shorter” Obama, who has no leadership skills, whatsoever.

As a result, our federal government has been inept, neutered, and brought to a grinding halt. For once, we have seen our representative begin to listen to the American people on this issue, because it is a fight between the ruling political class and the rest of America. Even though we have reason to be optimistic, Speaker Boehner cannot be trusted. In fact, I smell an alternative motive at play.

House Majority Leader Eric Cantor, R-Va., said that the House this week will also unveil a plan to raise the nation’s debt limit while delaying the implementation of parts of Obamacare for one year. It would surprise me little to see the House GOP leadership use our movement to delay the implementation to the benefit of their own political expediency.

Republican Study Committee Chairman Steve Scalise, told the Daily Caller that he believes the House GOP is coalescing around a strategy of delaying Obamacare. The Louisiana congressman, who is introducing an alternative to the president’s signature health-care law Wednesday, said he and his allies hope to extend the existing Obamacare delays to more Americans than just the “political class.”

Although I am encouraged by this news, we clearly needs to keep an eye on the House GOP leadership, and be ready to pounce when they get weak in the knees.

The IRS Scandal Resurfaces With Damning Emails From Lois Lerner