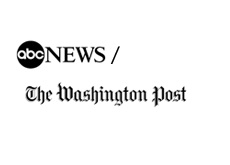 Examine the latest ObamaCare approval polls, and two observations will immediately jump out at you. First, disapproval spreads are increasing enough to show just how deeply unpopular the law has become, and just how much of an outlier the ABC News/Washington Post poll has become. Sadly, one of these organizations isn’t a first-time offender, and due to their consistent propensity to be the outlier, releasing wildly inaccurate survey findings, we are downgrading their rating from a 2.5 to a 3.5, nearly the lowest rating a pollster can be assigned by PeoplesPunditDaily.com.

For those who may not be avid readers, we rate pollsters based on past accuracy as part of our election forecast model, with 1 representing a stellar rating, or performing within an average 1 or 2 point margin of error, and 4 being the least accurate. For example, SurveyUSA, YouGov, Quinnipiac University and Gravis Polls, all have performed well in the past. On the other hand, Rasmussen Reports and the Democratic pollster Public Policy Polling (PPP), are low-performance and wildly inaccurate polling firms who consistently miss the mark by wide margins.

Let’s begin with a bit of recent history to explain our decision, then we will look at the latest ObamaCare polls that served as the proverbial straw that broke the pundit’s back, leaving us no choice but to downgrade the joint public survey.

The Virginia governor race in 2013, for instance, is a perfect example and was, perhaps, the worst call made by the Washington Post pollster, until now. Abt-SRBI conducted a survey for the Washington Post from 10/24 to 10/27 that found McAuliffe leading Cuccinelli 51 percent to 39 percent. Despite all of the signs clearly showing the race tightening as ObamaCare moved front and center, the Washington Post commissioned a survey that stayed true to a narrative they had pushed that entire campaign. A month prior, PeoplesPunditDaily.com took a look at the relationship between the bias media coverage — much of it from the Washington Post — and the nearly-twenty point swing toward McAuliffe beginning in the month of May.

It was disgraceful, and blatant.

We have hesitated to pull the trigger on this rating because, though polls commissioned exclusively for the Washington Post have made far too many bad calls in recent years, independent ABC News polling has been relatively accurate until 2010, and pollsters deserve some time to either correct their methodology (due to the fluid nature of the electorate) or change the company they keep. However, it has become painfully obvious that — when surveys are jointly commissioned — their methodologies are either blissfully and intentionally flawed, or outright manipulated.

Let’s now look at the latest ObamaCare approval polls, which as of now, currently averages 39.5 percent approve and 54 disapprove, according to the PPD average.

At a time when pollsters from the right and left are finding all-time high disapproval spreads upwards of 18 percent, the ABC News/WaPo poll found only a 2 percent spread. And when we look at the broader sample of adults, we actually find a positive 2 percent approval spread, something no pollster has ever, ever found. Two other surveys of adults conducted just a few days earlier — from CBS News and the Associated Press/GfK — both found an unprecedented amount of negative sentiment toward the law, oppose + 13 (CBS News) and oppose +17 (Associated Press/GfK), respectively. In fact, regarding the Associated Press/GfK, among a nearly-identical sample of 1012 adults, a record low of just 26 percent approved of ObamaCare.

Among polls conducted among registered voters, including from the bipartisan CNN/Opinion Research and Fox News, which are conducted jointly by Democrat and Republican polling firms, pollsters recorded all-time high levels of opposition to the president’s signature health care law. Even Rasmussen Reports, who I recently demonstrated swung demonstrably toward the left after favoring Republicans for two cycles, has found a new high — oppose +18 — for the law itself, and, a new low — 36 percent — level of support for single-payer.

Every pollster releases an outlier from time to time. But a laundry list of outliers is evidence of a dubious attempt to push a politically motivated narrative, or in this case specifically, a suspicious attempt to influence and misrepresent public opinion over ObamaCare right before the deadline arrived.

At People’s Pundit Daily, we cannot and will not allow such findings to influence our model or the political process, thus we are downgrading the ABC News/WaPo poll to allow PPD and other pundits to adjust election analysis accordingly.

NC Senate Polls Confirm Dems' Fears: Hagan Is Hanging By A Thread, If That