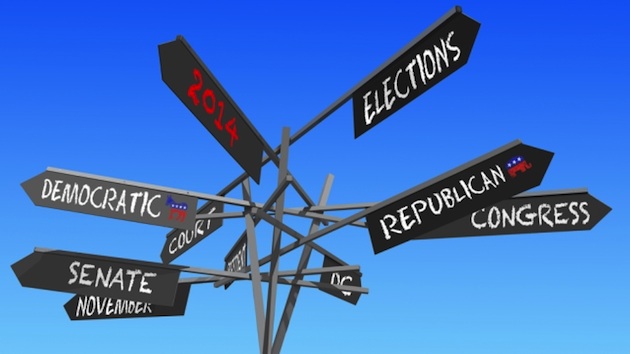 It’s a Democratic strategist’s a talking head’s worst nightmare. For the first time since September 2011, the Republican Party has a higher favorability rating than the Democratic Party. Democrats have long-touted that they are better liked than Republicans, despite suffering not one but two historic midterm defeats, but it is now yet another talking point they will have to learn to manage without.

According to a Nov. 6-9 Gallup poll, which was conducted after the Republicans wave swept away Democrats up and down the ballot across the country, a record-low 36 percent of Americans now say they have a favorable opinion of the Democratic Party, down 6 percentage points from before the elections, while the GOP actually inched up 2 points to 42 percent.

“After the 2012 election, many political analysts focused on the GOP’s ‘image problem.’ Now, it is the Democrats who appear to have the more battered image” said Gallup’s Andrew Dugan. “After President Barack Obama’s re-election in 2012, the Democratic Party’s favorable rating spiked to 51 percent, the first time either party had enjoyed majority support since 2009,” Dugan added. “However, after the post-election glow wore off, the party’s image settled back down near the 45 percent average for the Obama presidency.”

A new survey conducted by Rasmussen Reports found that 30 percent — a significant number, yet still a minority — believe last week’s election results were more about supporting the Republican Party and its candidates than a vote against the Democrats, while 49 percent disagreed, instead saying the election results were a vote against the Democrats. PPD’s senior political analyst, Richard Baris, took a look at the conflicting surveys earlier today.

“Gallup and Rasmussen may be revealing something that appears to be conflicting, but actually isn’t,” Baris said. “Exit polling showed both parties had an equal net 12-point negative among voters, but clearly neither are particularly popular.”

Still, Baris says the polling results are significant and that the Democrats lost a powerful argument, even if it was simply one that the talk show circuit was giving a platform to project.

“Look, this, much like the election, is disabling to the Democratic Party,” he added. “They suffered such serious defeats for a reason, and I’d expect the GOP to get a bump.”

Rasmussen Reports badly called the actual election. As Baris outlined in a recent article, Rasmussen’s polling results were bias in favor of Democrats between 8 and 9 points, on average. In presidential approval rating, the pollster has repeatedly shown a bias in favor of President Obama by roughly the same spread in post-2012 polling, though that has widened in the days following the election.

“Again, if these results have to be reconciled in any way, it is actually minor based on differences in polling methods and question formatting,” he pointed out. “But if there are conflicting results, political junkies should go with Gallup because — unlike Rasmussen — their results are trustworthy.”