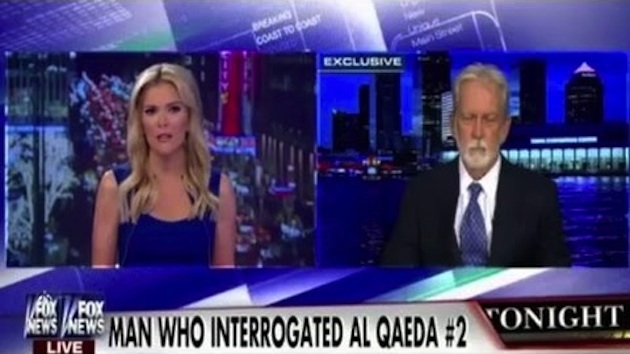 Megyn Kelly Interviewed Dr. James Mitchell, the EIT architect who interrogated Khalid Sheikh Mohammed, reacted to the Senate Democrats’ CIA report on enhanced interrogation. Dr. Mitchell said the release of the report and subsequent controversy shows the enemy that we don’t have the resolve to fight them.

“We saved lives, I don’t care what the Senate said,” Mitchell fired back. “I feel horrible for the nation. I feel horrible in part because this puts everyone at risk. And worse yet, it shows al Qaeda and the al Qaeda 2.0 folks – ISIL – that we’re divided and that we are easy targets; that we don’t have the will to defeat them.

Dr. Mitchell went on to tell Kelly about an exchange he had with KSM, Khalid Sheikh Mohammed, the mastermind of 9/11, during which KSM told him what he felt were obvious weaknesses and predictable behaviors of the American Left.

It would appear KSM and al Qaeda were right — at least, in the sense they could count on the Left to have weakened resolve over the years — just as the Taliban believe “Americans have the watches, but we have the time.”

“Khalid Sheikh Mohammed has an opportunity to defend himself and I don’t,” Mitchell said. “They put my life in danger, they put the lives of other CIA personnel and our families in danger for some sort of moral high ground?”

A Democrat-led Senate panel headed up by Sen. Diane Feinstein (D-CA) released the report last week despite dire warnings from lawmakers and intel officials. These warnings, which were even echoed by some within the Obama administration, who contended the findings would “endanger the lives of Americans” all over the world.

In fact, Dr. Mitchell says the release of the report has directly threatened his life and the lives of others in the program, and that he was told over the weekend that he had to abruptly leave his home.

CIA Director John Brennan opened a first-of-its-kind news conference last week by recounting the horrors of the 9/11 terrorist attacks, and echoed Mitchell’s characterization of the post-attack period. Officials knew that a second and third wave was imminent, which Mitchell inferred likely involved a dirty bomb. Brennan also laid into the Senate report.

The GOP minority released a rebuttal report refuting the claims made in the Democrats’ majority report, which criticized the CIA enhanced interrogation program as ineffective and misleading.

Former CIA officials have been pushing back hard on the claims made in the report, including that the interrogation didn’t produce intelligence and that the CIA lied to the Bush administration regarding the tactics. Tuesday, Jose Rodriguez, the ex-CIA chief in charge of the enhanced interrogation program, said Senate Democrats released a bogus partisan report aimed to throw the CIA “under the bus” in order to cover for themselves.

Rodriguez further said this week that Minority Leader Nancy Pelosi (D-CA) was personally briefed on the program, as were Senate Democrat leaders, despite the current false outrage.

“I remember very clearly briefing Nancy Pelosi in September of 2002,” he said on Fox News Sunday. “The Congress had been on break. As soon as they got back from break in September, the first thing I did is I went to brief her and Porter Goss, who was the chairman of the House Permanent Select Committee on Intelligence at the time.”

“Our view on this is shared by the CIA and the Senate Intelligence Committee’s Republican minority, both of which are releasing rebuttals to the majority’s report,” the three former CIA heads wrote. “Both critiques are clear-eyed, fact-based assessments that challenge the majority’s contentions in a nonpartisan way.”

A group of former CIA officials launched a website called CIASavedLives.com in response to the committee’s majority report, defending the agency’s tactics.

According to recent polls, including a PPD Poll, Americans support the use of enhanced interrogation over Feinstein’s moral high ground.

Al Sharpton Protest: 'What Do We Want, Dead Cops!'