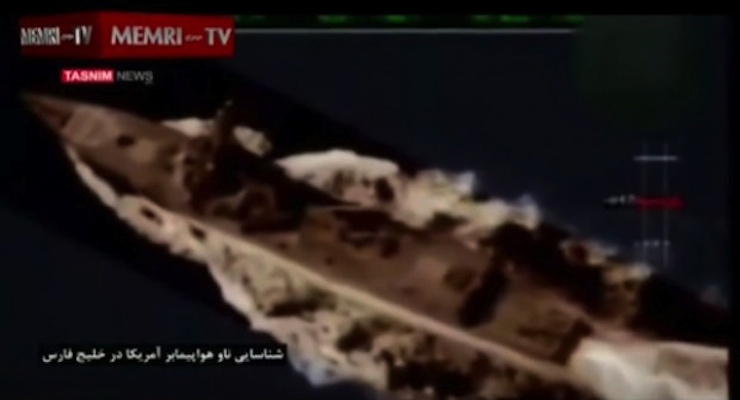 Iran’s Revolutionary Guard recently released a video purporting to show an IRGC naval plane conduct a provocative flyby of an U.S. aircraft carrier in the Strait of Hormuz. The video, which was shared by the Middle East Media Research Institute reported, was broadcast by Iran’s Tasnim News Agency on August 29, 2015, just a few days before the 34th Senate Democrat announced they would support the president’s nuclear agreement with Tehran.

“IRGC [Revolutionary Guard] drones have carried out such missions many times; although the drone remains for a long time above the [American crew’s] heads, they didn’t notice it,” the Iranian news agency Tasnim touted in their report. “In some cases, [the American crew] did notice the IRGC drone awhile after the filming and tried to drive it off by sending a helicopter or fighter jet after it.”

The report stated that an Iranian naval plane, the Harbin Y-12, also took part in the reconnaissance mission to “identify an American aircraft carrier.” However, MEMRI noted that Tasnim released the clip on August 29 but did not specify when the video was captured.

Last week, Ayatollah Mohammad Yazdi, a top Iranian cleric said in public comments that the U.S. continues to be the “number one enemy” of his country, despite the nuclear agreement. The nuclear deal should not “change our foreign policy” toward the U.S., “our number one enemy, whose crimes are uncountable,” said Yazdi, who is the leader of the Assembly of Experts which elects Iran’s supreme leader.

Fiorina: I'm More Qualified Than Pols "Running for Political Office All Their Lives"