Fiorina in GOP Debate: If We Will Not Force Obama To Veto Planned Parenthood, Shame On Us 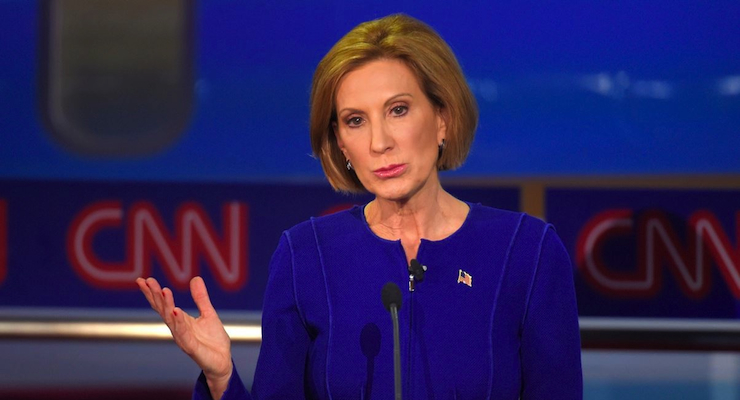 Former Hewlitt-Packard CEO Carly Fiorina addressed both Iran and Planned Parenthood in one soundbite during the CNN GOP debate Wednesday night. Fiorina, who is being heralded as the consensus winner by the political class, though she came in second in PPD’s Sunshine State Post GOP Debate Poll, said the issues spoke to the security and character of the nation.

“As regards Planned Parenthood, anyone who has watched this videotape, I dare Hillary Clinton, Barack Obama to watch these tapes,” Fiorina said. “Watch a fully formed fetus on the table, it’s heart beating, it’s legs kicking while someone says we have to keep it alive to harvest its brain.”

While PPD has extensively covered the undercover videos exposing Planned Parenthood’s illegal trafficking of baby body parts, including the latest and tenth video featuring a top executive expressing concern their activities would “destroy” PPFA, PoliFact caught on to what left me scratching my head, as well.

“Fiorina’s claim makes it sound like there is actual footage of Planned Parenthood examining an aborted fetus whose heart is still beating, while someone says ‘we have to keep it alive to harvest its brain,'” PoliFact wrote. “There isn’t.”

We don’t believe that is an accurate description, either. However, Fiorina either didn’t watch the videos or grossly overstated the footage. In fact, there are images and clips alluding to doctors poking through baby eyeballs and various other body parts, but the actual dismembering process is not on the videos. Various undercover interviews with PPFA executives and former employees expose their activities, but a viewer of the videos are not going to explicitly see them as Fiorina suggested.

“We rate her statement Mostly False,” PoliFact concluded. And we at PPD agree. The footage is absolutely grotesque, Planned Parenthood apologists are a disgrace and should be ashamed of themselves. Nevertheless, the footage also speaks for itself, and did not need to be Hollywood-ed up for the purpose of Fiorina getting a bump in the polls.

You have not heard a plan about Iran from any politician up here, here is my plan. On day one in the Oval Office, I will make two phone calls, the first to my good friend to Bibi Netanyahu to reassure him we will stand with the state of Israel.

The second, to the Supreme Leader, to tell him that unless and until he opens every military and every nuclear facility to real anytime, anywhere inspections by our people, not his, we, the United States of America, will make it as difficult as possible and move money around the global financial system.

We can do that, we don’t need anyone’s cooperation to do it. And every ally and every adversary we have in this world will know that the United States in America is back in the leadership business, which is how we must stand with our allies.

As regards Planned Parenthood, anyone who has watched this videotape, I dare Hillary Clinton, Barack Obama to watch these tapes. Watch a fully formed fetus on the table, it’s heart beating, it’s legs kicking while someone says we have to keep it alive to harvest its brain.

This is about the character of our nation, and if we will not stand up in and force President Obama to veto this bill, shame on us.