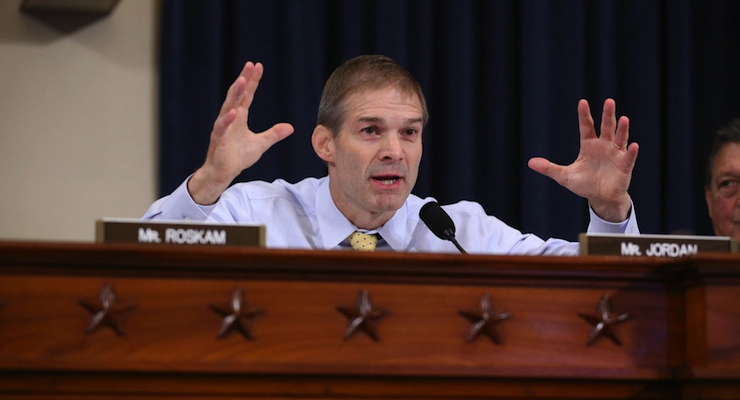 Rep. Jim Jordan, R-Ohio, hit Hillary Clinton with the smoking gun at the House Select Committee on Benghazi hearing Thursday when he introduced e-mails that show the former Secretary of State Hillary Clinton calling the attack on the U.S. consulate in Benghazi, Libya terrorism to family and the Egyptian prime minister.

Jordan asked Mrs. Clinton why it is she told Americans the Benghazi attack was a response to a YouTube video mocking Muslims, which it wasn’t, but e-mailed it was a terrorist attack to the Egyptian prime minister and family.

“You can tell the Egyptian prime minister it’s a terrorist attack, but you can’t tell your own people,” Jordan scolded Clinton.

REP. JIM JORDAN (R-OH): You just gave a long answer, Madam Secretary, to Ms. Sanchez about what you heard that night, what you’re doing. But nowhere in there did you mention a video. You didn’t mention a video because there was never a video-inspired protest in Benghazi. There was in Cairo but not in Benghazi.

Victoria Nuland, your spokesperson at the State Department, hours after the attacks said this, “Benghazi has been attacked by militants. In Cairo, police have removed demonstrators.”

Benghazi, you got weapons and explosions. Cairo, you got spray paint and rocks.

The attack starts at 3:42 Eastern time, ends at approximately 11:40 pm that night.

At 4:06, an ops alert goes out across the State Department.

But the best evidence is Greg Hicks, the number two guy in Libya, the guy who worked side by side with Ambassador Stevens. He was asked, if there had been a protest, would the ambassador have reported it?

For there to have been a demonstration on Chris Stevens’ front door and him not to have reported it is unbelievable, Mr. Hicks.

He said, secondly, if it had been reported, he would have been out the back door within minutes and there was a back gate.

Everything points to a terrorist attack. We just heard from Mr. Pompeo about the long history of terrorist incidents, terrorist violence in the country.

And yet five days later Susan Rice goes on five TV shows and she says this, “Benghazi was a spontaneous reaction as a consequence of a video,” a statement we all know is false. But don’t take my word for it. Here’s what others have said.

“Rice was off the reservation,” off the reservation on five networks, White House worried about the politics. Republicans didn’t make those statements. They were made by the people who worked for you in the Near Eastern Affairs bureau, the actual experts on Libya in the State Department.

So if there’s no evidence for a video-inspired protest, then where did the false narrative start?

It started with you, Madam Secretary.

At 10:08, on the night of the attack, you released this statement, “Some have sought to justify the vicious behavior as a response to inflammatory material posted on the Internet.”

At 10:08, with no evidence, at 10:08, before the attack is over, at 10:08, when Tyrone Woods and Glen Doherty are still on the roof of the annex, fighting for their lives, the official statement of the State Department blames a video.

FMR. SECRETARY OF STATE HILLARY CLINTON: During the day on September 11th, as you did mention, Congressman, there was a very large protest against our embassy in Cairo. Protesters breached the walls. They tore down the American flag. And it was of grave concern to us because the inflammatory video had been shown on Egyptian television, which has a broader reach than just inside Egypt.

And if you look at what I said, I referred to the video that night in a very specific way. I said, some have sought to justify the attack because of the video.

I used those words deliberately, not to ascribe a motive to every attacker but as a warning to those across the region that there was no justification for further attacks.

And, in fact, during the course of that week, we had many attacks that were all about the video. We had people breaching the walls of our embassies in Tunis, in Khartoum; we had people, thankfully not Americans, dying at protests. But that’s what was going on, Congressman.

JORDAN: Secretary Clinton, I appreciate most of those attacks were after the attack on the facility in Benghazi. You mentioned Cairo. It was interesting what else Ms. Nuland said that day.

But what troubles me more is I think you knew the truth.

I want to show you a few things here. You’re looking at an e- mail you sent to your family.

Here’s what you said at 11:00 that night, approximately one hour after you told the American people it was a video, you say to your family, “Two officers were killed today in Benghazi by an Al Qaeda- like group.”

You tell — you tell the American people one thing, you tell your family an entirely different story.

Also on the night of the attack, you had a call with the president of Libya. Here’s what you said to him.

It’s interesting; Mr. Khattala, one of the guys arrested in charge actually belonged to that group.

And finally, most significantly, the next day, within 24 hours, you had a conversation with the Egyptian prime minister.

You told him this, “We know the attack in Libya had nothing to do with the film. It was a planned attack, not a protest.”

Let me read that one more time.

“We know,” not we think, not it might be, “we know the attack in Libya had nothing to do with the film. It was a planned attack, not a protest.”

Why didn’t you tell the American people exactly what you told the Egyptian prime minister?

CLINTON: Well, I think if you look at the statement that I made, I clearly said that it was an attack. And I also said that there were some who tried to justify…

JORDAN: Real, real quick, calling it an attack is like saying the sky is blue. Of course it was an attack.

JORDAN: We want to know the truth. The statement you sent out was a statement on Benghazi and you say vicious behavior as a response to inflammatory material on the Internet. If that’s not pointing as the motive of being a video, I don’t know what is. And that’s certainly what — and that’s certainly how the American people saw it.

CLINTON: Well, Congressman, there was a lot of conflicting information that we were trying to make sense of. The situation was very fluid. It was fast-moving. There was also a claim of responsibility by Ansar al-Sharia. And when I talked to the Egyptian prime minister, I said that this was a claim of responsibility by Ansar al-Sharia, by a group that was affiliated — or at least wanted to be affiliated — with Al Qaida.

Sometime after that, the next — next day, early the next morning after that, on the 12th or 13th, they retracted their claim of responsibility.

CLINTON: And I think if — if you look at what all of us were trying to do, and we were in a position, Congressman, of trying to make sense of a lot of incoming information…

CLINTON: … and watch the way the intelligence community tried to make sense of it.

JORDAN: Madam Secretary, there was not…

CLINTON: So all I can say is nobody…

JORDAN: … conflicting — there was not conflicting information the day of the attack, because your press secretary said, “if pressed, there is no connection between Cairo and Benghazi.” It was clear. You’re the ones who muddied it up, not the — not the information.

Let me show you one more slide. Again, this is from Victoria Nuland, your press person. She says to Jake Sullivan, Philippe Reines. Subject line reads this: Romney’s Statement on Libya.

E-mail says, “This is what Ben was talking about.” I assume Ben is the now-somewhat-famous Ben Rhodes, author of the talking points memo. This e-mail’s at 10:35, 27 minutes after your 10:08 — 27 minutes after you’ve told everyone it’s a video, while Americans are still fighting because the attack’s still going on, your top people are talking politics.

But you picked the third option. You picked the video narrative. You picked the one with no evidence. And you did it because Libya was supposed to be — and Mr. Roskam pointed out, this great success story for the Obama White House and the Clinton State Department.

Mr. Chairman, I yield back.

Bill O'Reilly on Kate's Law Failing in Senate: "We No Longer Are a Nation of Laws"