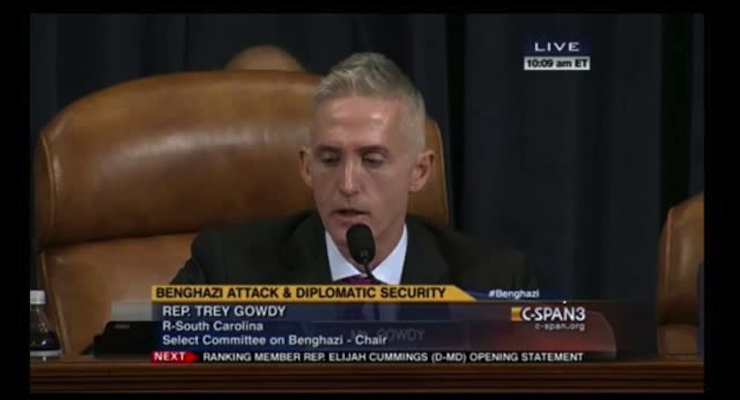 House Select Committee on Benghazi Chair Trey Gowdy, R-S.C., ripped the shortcomings of previous investigations, including the Accountability Review Board (ARB), which Clinton referenced numerous times when she testified before Congress in 2013. He noted that the ARB did not review her emails, nor did the investigators even interview Mrs. Clinton, the former secretary of state. Further, the transcripts of the interviews conducted was not made available, and they didn’t uncover (or didn’t report) that Mrs. Clinton was using a private server, which he didn’t focus on.

“Madame Secretary, I understand some people — frankly in both parties — have suggested this investigation is about you,” Gowdy said in his opening statement. “Let me assure you it is not. And let me assure you why it is not. This work is about something much more important than any single person. It is about four U.S. government workers, including our Ambassador, murdered by terrorists on foreign soil. It is about what happened before, during, and after the attacks that killed these four men.”

The select committee grilled Mrs. Clinton for roughly 11 hours on Thursday, though they still do not have all of the pertinent emails. Yet, it was established beyond a shadow of a doubt that Hillary knew the terror attack on the Benghazi consulate that claimed the lives of 4 Americans had absolutely nothing to do with a YouTube video that was offensive to Muslims, despite her public statements and comments to the victims’ families.

“Not a single member of this Committee signed up for an investigation into you or your email system,” Gowdy added. We signed up because we wanted to honor the service and sacrifice of four people sent to a foreign land to represent us – who were killed – and do everything we can to prevent it from happening to others.”

The chairman was attempting to refocus the public’s attention on why the committee was established in the first place, following Majority Leader Kevin McCarthy’s gaffe on “Hannity” late last month. McCarthy suggested the committee was established to drag Hillary Clinton’s poll numbers down and supporters have used to argue it was a partisan witch hunt, though the victims’ families would argue otherwise.

Uncle of Benghazi Victim: "Hillary Clinton is a Serial Liar"