Ted Cruz: “Candidates On That Stage Have Supported Amnesty,” Clinton Will Beat Them 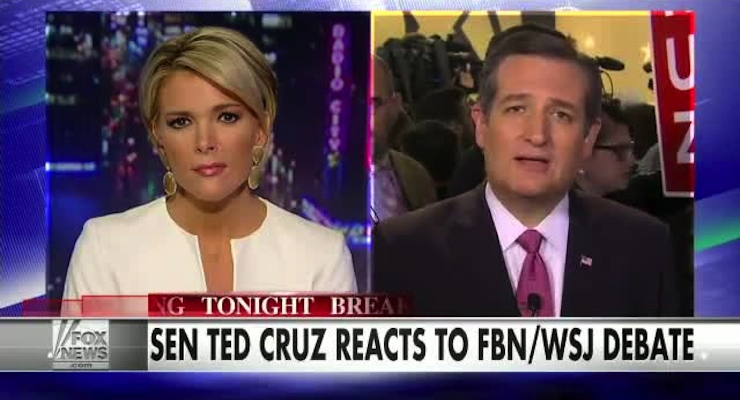 Texas Sen. Ted Cruz doubled down on his defense of conservative opposition to amnesty for illegals and said Hillary Clinton will defeat the candidates who support it during his reaction to the fourth debate in an interview with Megyn Kelly.

“The Democrats are laughing because if Republicans join Democrats as the party of amnesty, we will lose,” Republican presidential candidate Sen. Ted Cruz said at FOX Business’ debate on Tuesday night. “And you know, I understand that when the mainstream media covers immigration, it doesn’t often see it as an economic issue. But I can tell you for millions of Americans at home, watching this, it is a very personal economic issue. And I will say the politics of it would be very, very different if a bunch of lawyers or bankers were crossing the Rio Grande.”

“Or if a bunch of people with journalism degrees were coming over and driving down the wages in the press,” Cruz said to laughter. “Then we would see stories about the economic calamity that is befalling our nation.”

“And I will say for those of us who believe people ought to come to this country legally and we should enforce the law, we’re tired of being told, it is anti-immigrant. It’s offensive,” Cruz said to applause from the audience.

“I am the son of an immigrant who came legally from Cuba to seek the American dream.,” he said. “And we can embrace legal immigration while believing in the rule of law.”

Kasich to Trump on Deporting Illegals: "Think About the Children"