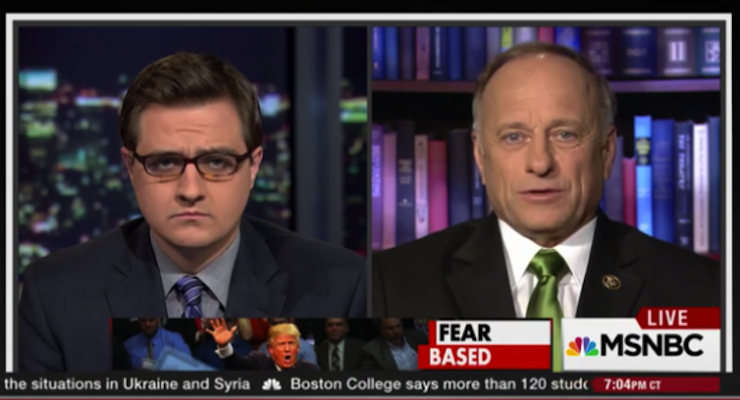 Rep. Steve King debated MSNBC’s Chris Hayes during an interview Friday after the leftwing host tried to compare Planned Parenthood shooter Robert Dear to Islamic terrorists. Hayes first tried the “what if” tactic to ask about whether King would support banning Jews and Christians had they been killing in the name of their religion.

“Well, if Jews, in the name of their religion, were killing Americans, I think it would be an appropriate comparison,” King replied. “But as far as I know, there is only one religion doing that, and it is a segment of the religion of Islam that’s doing that.”

Hayes then moved on to say that last month’s Planned Parenthood shooter was driven by his Christian faith, and asked King who he was to say otherwise. Rep. King responded by saying that Jesus never taught to kill.

“Jesus never ordered anyone to be killed, and he never raised his hand to injure anyone specifically,” Rep. Steve King added. “But Mohammed did, and there is a big difference in this.”

Hayes again pursued the same, tired intellectually dishonest and historically inaccurate line of questioning by bringing up a Protestant nativist movement nearly 100 years ago. Again, the religious group in question, in this case Catholics, were not engaged in a jihadist holy war on Americans because the central figure in their faith told them to do so.

King responded by explaining to Hayes that Catholics who immigrated to the U.S. did so with the intention of assimilating into American society, including their embrace of the Protestant work ethic. The ethic, as argued in Our Virtuous Republic, is not only the core of the American national identity but the secret to its success, which was taken into account when writing, codifying and ratifying the U.S. Constitution.

By comparison, 84% of Pakistani Muslims, who received roughly one-tenth of all K-1 visas issued by the State Department last year, told Pew Research they believe in the supremacy of Islamic Sharia law.

Following the interview with Rep. Steve King, Hayes interviewed Rep. Keith Ellison, D-Minn., a Muslim lawmaker whom King requested to be asked whether he believes Sharia trumps the U.S. Constitution. While the two laugh and giggle together as they suggest Rep. King is an Islamophobe, you’ll notice he never really answers the question. Further, for the record, Ellison represents one of the areas in the Twin Cities that was used in a past refugee resettlement program. It’s now a cesspool filled with Somali Islamic extremists.