HomeVideoHillary Clinton Refuses to Explain Difference Between Democrats and Socialists 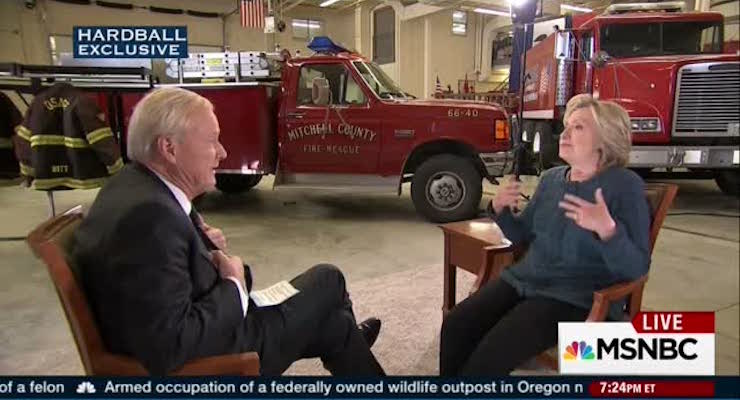 Chris Matthews stumped Democratic presidential frontrunner Hillary Clinton on Tuesday during MSNBC’s Hardball when he asked her to explain the difference between Democrats and socialists.

If this sounds familiar, it should. Matthews also asked Democratic National Committee Chair Debbie Wasserman Schultz the same question in August (2015). She, too, refused to answer the question. In fact, even Matthews conceded that she refused to answer the question, not that she couldn’t. She just didn’t know what to say without damaging the party among general election voters.

“Debbie Wasserman Schultz wouldn’t answer the question either, I asked her,” Matthews said. “Because I know politically you have to keep together the center left and the left have to still work together.”

CHRIS MATTHEWS: OK, last question, we’re running out of time. I want to try to help you for this audience tonight, our audience, locate yourself politically in this country. Now we have Trump out there, and we have Bernie out here. Now Bernie calls himself a Socialist. Nobody uses a derogatory term any more. It’s his — he loves to have that label. He’s never run as a Democrat, he runs against Democrats up there in Vermont. You’re a Democrat. I’d say you’re a pretty typical Democrat, in the tradition of the Democratic Party. And Humphrey and the rest of them. (Scoop) — not even (Scoop), I’d say Mondale. You’re somewhere in there. What’s the difference between a Socialist and a Democrat?

MATTHEWS: Is that a question you want to answer, or would you rather not?

CLINTON: But I’m not one.

CLINTON: I’m not one.

MATTHEWS: What’s the difference between a Socialist and a Democrat.

CLINTON: Well, I can tell you what I am. I am a progressive Democrat.

MATTHEWS: How’s that different than a Socialist?

CLINTON: I’m a progressive Democrat who likes to get things done and who believes…

CLINTON: …that we are better off in this country when we’re trying to solve problems together.

CLINTON: Getting people to work together. There will always be strong feelings, and I respect that, from, you know, the far right, the far left, Libertarians. But whoever it might be, we need to get people working together. We got to get the ecoomy fixed…

CLINTON: …we got to get all of our problems, you know, really…

CLINTON: …tackled. And that’s what I want to do.

MATTHEWS: I think the difference is, and Debbie Wasserman Schultz wouldn’t answer the question either, I asked her. Because I know politically you have to keep together the center left and the left have to still work together. I know all that. Let me ask you about working together. You gave a nice speech here today in Osage about the need to — I wrote a book about Tip and Reagan. When it comes to an urgent issue, they can find a solution.

MATTHEWS: Obama, and I’ve always supported the President on his philosophy and his general approach to a lot of things, but he doesn’t seem to like the company of fellow politicians. He just doesn’t. He doesn’t want to hang out with them, play cards with them. Mabybe he did it in Springfield. For some reason he doesn’t want to do it in [Washington]. You seem to like the company of people like Lindsey Graham and John McCain, and you can find a way, and go on and (co deals) with them, and getting along with them. And it seems to me that is an important part of life.