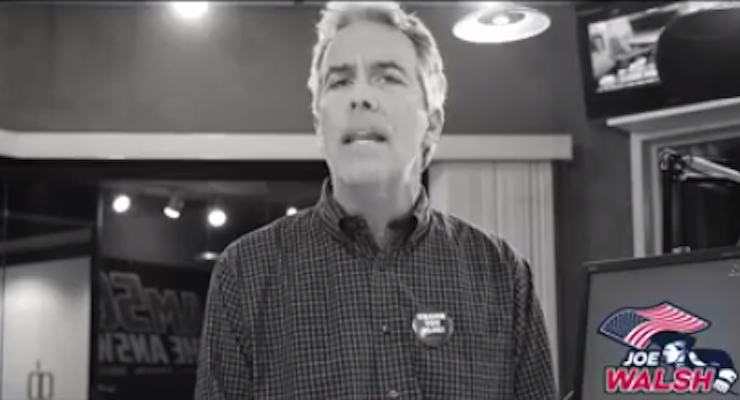 Former Illios Congressman-turn-radio host Joe Walsh said on his broadcast that he would “ignore Obama’s new gun executive orders,” and encouraged others to do the same. Walsh also taunted Attorney General Loretta Lynch, who said she will hunt down those who do not obey Obama’s new executive decree on guns.

Three weeks ago, Loretta Lynch said she’d jail Americans who exercised their 1st Amendment rights. Today, she said she’d jail Americans who exercised their 2nd Amendment rights. No! Enough! I will say what I want about Islam and I will ignore & defy Obama’s new gun laws. I will encourage other Americans to evade Obama’s new gun laws as well.It’s time for civil disobedience. We have a right to do what Americans have done since 1791 – buy and sell guns privately. Come and get us Loretta Lynch. We will evade Obama’s gun laws. We will sell our guns privately without registering them. We have a God given right to do so. Come and get us.

Last month, following the terrorist attack in San Bernardino, Walsh went on an epic rant against Lynch for saying she would prosecute Americans for “anti-Muslim” rhetoric at the 10th Anniversary Dinner of Muslim Advocates.

“When we talk about the First Amendment we [must] make it clear that actions predicated on violent talk are not American. They are not who we are, they are not what we do, and they will be prosecuted,” Lynch said at a banquette for same group that lobbied the Obama administration to scrub all references to Islam and jihad in training manuals and courses used to train agents in intelligence agencies.. “My message not just to the Muslim community but to all Americans is: we cannot give in to the fear that these backlashes are really based on.”

Lynch has also called on Muslim parents to contact her if their children are bullied in school, which was one of many comments that didn’t sit well with detractors, i.e. those who value the First Amendment. She also said the San Bernardino jihadist attack gave her a “wonderful opportunity.”

Trump: "Sure It's a Threat," Hillary Clinton is "Married to an Abuser