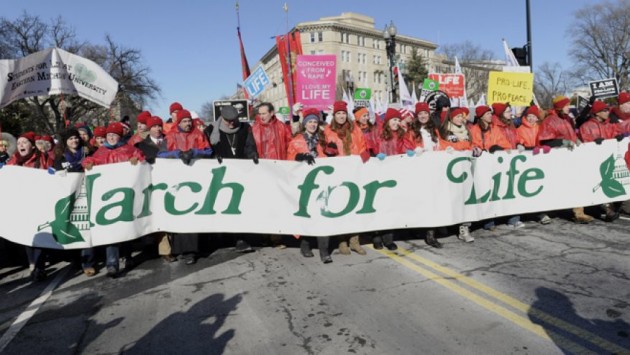 At last estimate, around 300,000 attended the Roe v. Wade anniversary march in Washington D.C. to mark 41 years since the Supreme Court decision. And they did so with the blessing of Pope Francis from the Vatican, and the stanch opposition of President Obama.

The annual “March for Life” is held every January on the Roe v. Wade anniversary, when the Supreme Court’s 1973 decision to proclaim a constitutional right to abortion. The Roe v Wade anniversary drew many Catholic high school and college students from all across the nation to peaceful protest, hold events, and lead prayer vigils that led up to a rally and march on the National Mall.

President Obama said the 41st anniversary of the Supreme Court’s Roe v. Wade decision is a chance to “recommit ourselves to the decision’s guiding principle: that every woman should be able to make her own choices about her body and her health.”

Then, rather than addressing the 55 million babies who have been terminated as a result of a nation’s failing at personal choice, he took the opportunity to push his failing health care law, ObamaCare.

It was a stark contrast from Pope Francis, who tweeted out support for the movement, and a plea for all to wake up to the moral failings of abortion.

I join the March for Life in Washington with my prayers. May God help us respect all life, especially the most vulnerable

That certainly was of no concern to President Obama, but House Majority Leader Eric Cantor (R-VA) said during his speech there had been an expansion of abortion coverage in the nation’s health care overhaul. It is true that under ObamaCare, federal funding for abortion is now a reality on a scale never-before comprehended up to just a few years ago.

Now, particularly due to the services provided under Medicaid expansion, the number of aborted babies, by most estimates, will rise at an accelerated rate due to the abortion rates among poorer Americans.