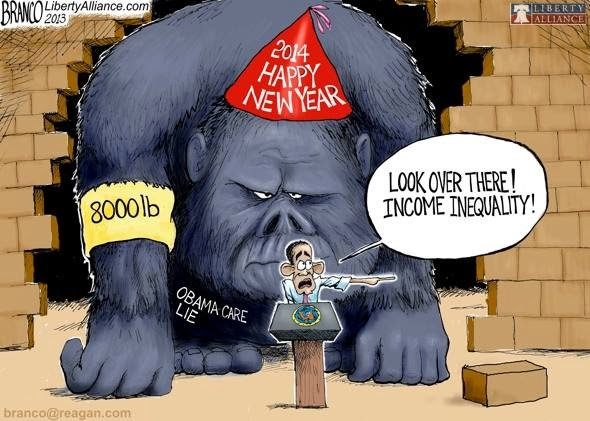 The Democratic Party has bet their midterm fortunes on a rather ironic message of income inequality, which the president said is the defining challenge of our time. But a new survey (view embed below) finds that bet may have been foolishly placed on a bad tip.

A new Fox New poll found that only 13 percent of registered voters say the government shouldn’t interfere with the fact some citizens make more than other citizens.  A rather surprising 62-percent majority said it is okay to have income inequality “because that’s just how the economy works,”  and though 21 percent said income inequality “stinks,” they still say the government “shouldn’t get involved.”

And the sentiment is observable across the class spectrum, which in and of itself, is an anti-American classification. Only 21 percent of voters who have an annual household income below $30,000 say the government should target income inequality, while even fewer — 12 percent — of those with incomes at or above $100,000 agree.

The Democrats and, in fact, the official platform of the Democratic Party, tends to view the economy as  a zero-sum game, with successful Americans necessarily benefiting from the suffering of others. But Americans do not agree. Only 12 percent of registered voters said if someone makes a lot of money it means someone else has to make less, while a whopping 84 percent said the economy isn’t a zero-sum game.

Again, the sentiment cuts across all demographics of income, with an overwhelming 83 percent of registered voters with incomes below $50,000 in agreement, compared to a nearly identical 84 percent with incomes at or above $50,000.

In traditional American fashion, a majority of registered voters think government involvement can make income inequality worse, a possible reflection of the reality under collectivist ideologue, President Obama. Under the Obama administration, poverty and dependence have both skyrocketed, even as the top wealthy 1 percent have accumulated 95 percent of the wealth.

According to the survey conducted for Fox News, 55 percent think giving unemployment benefits to people who have been out of work for a long time discourages them from looking for a job.  Even though Americans are compassionate in their past support of the long-term unemployed, both higher and lower-income groups say long-term jobless benefits incentivize Americans to stop trying to find work.

On the actual duration of time the federal government should be offering unemployment benefits? A significant quarter, or 26 percent, say jobless benefits should be offered for less than 1 year, 36 percent said for 1 year, 13 percent said 1.5 years, and 20 percent (1 in 5) said 2 years or more.

The Fox poll isn’t all bad news for the Democrats, as a 56-percent majority said they agee with the president and Democrats the minimum wage should be raised, but 1 in 4 registered voters wouldn’t raise it (25 percent) and 15 percent said the government shouldn’t ever be telling businesses what to pay their employees. Taken together, it’s a significant minority who take a hands off approach. A clear consensus among economic experts holds all data show raising the minimum wage costs the economy more jobs, a fact echoed by he Department of Labor.

A study conducted by the Department of Labor concluded that the first minimum wage, 25 cents per hour in 1938, cost the jobs of 30,000 to 50,000 of the 300,000 workers who were covered and had previously earned below the minimum. And a 2007 review of 102 studies that were conducted beginning in the 1990s by David Neumark and William Wascher found, “Indeed, the preponderance of the evidence points to disemployment effects.”

Demographic groups who are most likely to support raising the minimum wage include blacks (83 percent), Democrats (76 percent), liberals (75 percent), voters whose income is below $30,000 (67 percent) and women voters (63 percent).

Ironically, among the individual issues survey in the new Fox poll, the 39 percent approval Obama gets for the job he’s doing on income inequality (39 approve), is the highest rating he gets. In fact, the president’s job approval is stubbornly stuck in the low 40s in both the Fox poll and the PPD average job approval ratings. However, Americans aren’t concerned with income inequality, with just 12 percent viewing income inequality as the top economic issue facing America. What Americans do care about is jobs and unemployment (40 percent), along with government spending (36 percent).

The Fox News poll is based on landline and cell phone interviews with 1,010 randomly chosen registered voters nationwide and was conducted under the joint direction of Anderson Robbins Research (D) and Shaw & Company Research (R) from January 19-21, 2014.  The full poll has a margin of sampling error of plus or minus three percentage points.