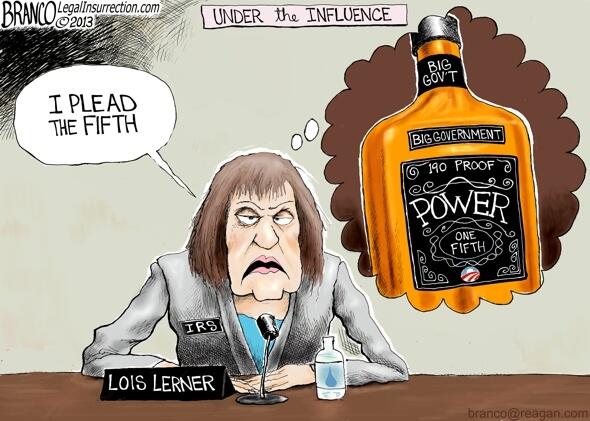 In fact, rather than the targeting practices being a result of a few local officials in the Cincinnati office, Lerner was intimately involved in the designing of the target mechanisms.

Lois Lerner took the Fifth after first awkwardly providing a defense of herself, drawing severe criticism, but it is becoming increasingly obvious she was trying to avoid answering congressional questions for a dubious reason.

In an email dated from February 2011, Lerner writes that the tea party matter was “very dangerous” and “Cincy should probably NOT have these cases.”

It was direct correspondence from a treasury official to Lerner implying they work “off plan” — which is a coded reference for keeping their meetings from publicly available schedules.

The new regulations would, which are unbelievably still pending approval right now, would permit the IRS to target any political dissent by non-profit groups, such regulations that are unconstitutional:

Ironically, the IRS has exempted the labor unions and trade associations from these new rules, groups that support liberal candidates.

At the American Center for Law and Justice they filed suit against the IRS and key IRS officials on behalf of 41 conservative groups in 22 states.

Cleta Mitchell, in written testimony to the House Committee on Oversight and Reform, underscored all of the criminal actions that are taking place.

The conduct of the criminal investigation has been nothing more than a farce with a Democratic partisan leading the way.

Approximately eight months after, the Department Of Justice has done nothing more than announce token gestures, attempting to minimize the investigation as much as possible.

Becky Gerritson, Founder and President of the Wetumpka TEA Party, offered written testimony, one of the many people who are suffering through the IRS harassment:

Not one member of Congress should ever declare war on some Americans because they do not respect their Constitutional rights and viewpoints and are unwilling to accept a United States Supreme Court ruling protecting those rights. Again, “I am telling many in my government that you have completely forgotten your place!”

In my previous testimony, I explained that our application was complete and accurate and we clearly qualified for a 501c4 tax-exempt status, yet that didn’t stop the IRS from demanding information they were not entitled to; unconstitutional requests that violated their own rules. The information that they demanded we give them had nothing to do with the status we were seeking. Why must the IRS know who came to our meetings? Why did they need to have copies of every speech ever given and the credentials of our speakers? Why did they need to know who our donors were? None of this was their business.

This is a very valid question that Ms. Gerritson is asking, although, the Obama administration is purposely delaying the release of relevant documents.

In a recent interview with Fox News, the president revealed how he truly felt regarding the IRS scandal, coming to the conclusion that there was “not even a “smidgen of corruption,” which is at odds with the fact there is an “on-going criminal investigation.”

President Obama is suffering in the polls, fueled by the fact he is no longer considered trustworthy in the eyes of the American people. If this does not come to a conclusion and no one is held accountable for these criminal actions, then the 2014 elections may be a greater disaster for the Democratic Party than previously conceived.