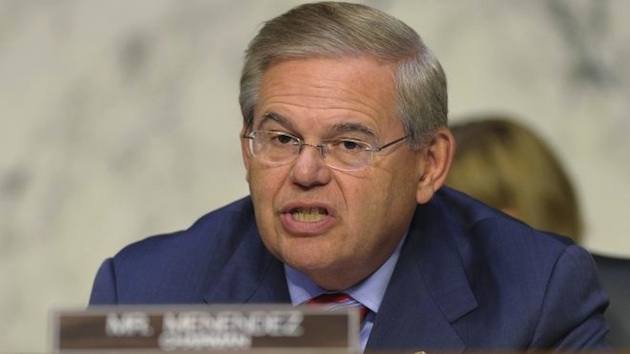 FILE – In this Sept. 4, 2013, file photo, Sen. Robert Menendez, D-N.J. speaks at Capitol Hill in Washington. Key Democratic and Republican senators are crafting legislation to reinstate the full force of Iran sanctions and impose new ones if Tehran doesnât make good on its pledge to roll back its nuclear program, brushing aside the Obama administrationâs fears about upending its diplomatic momentum. Menendez and Sen. Mark Kirk, R-Ill., hope to have the bill ready for other lawmakers to consider when the Senate returns Dec. 9 from its two-week recess, according to legislative aides. (AP Photo/Susan Walsh) (A2013)

“This bill is a good bill and I’d hoped the administration would have supported it,” Menendez said. “We are going to have to see what the agreement is and what are the mechanisms for verification. There needs to be a very robust inspection.”

Sen. Menendez has been a leading and very vocal critic of the president’s unpopular Iran policy, and was even gearing up to co-sponsor draft legislation meant to check the administration’s power to negotiate a deal. However, the Justice Department will soon file corruption charges against the powerful senator, alleging that he used his office to help a Democratic donor who is also his long-time friend.

The timing of the federal charges against Menendez is blatantly suspicious, as the administration resurrected years-old charges they had refused to investigate in the past. Still, despite the immense political and legal pressure from the White House, he has not backed down.

Though he supported the decision to delay a vote on his own new sanctions bill (S. 615) until after the March 31 negotiating deadline, which was done with the hope to win more Democratic support, Sen. Menendez repeated Sunday that he would oppose any deal that leaves Iran as close as one year away from the bomb.