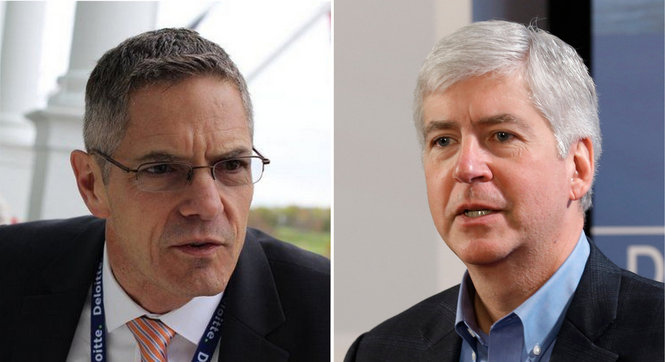 The Michigan Governor race is the fifth article in what will be a succession of articles offering expanded analysis released for the PPD 2014 Governor Map Predictions. With Rep. Gary Peters opting to run for retiring Sen. Carl Levin’s (D) seat and 2010 Democratic nominee Virg Bernero uninterested in another go at incumbent Republican Gov. Rick Snyder, ex-Rep. Mark Schauer (D) is the only viable Democratic nominee in Michigan.

Gov. Snyder, who officially launched his reelection earlier this month with a new 60-second TV ad, calling him “Michigan’s Comeback Kid,” raised $5.08 million in 2013. Synder has $4 million on hand and has the ability to self-fund as he did in 2010, when he spent nearly $6 million of his own money.

Ex-Representative Mark Schauer, on the other hand, raised just $1.6 million since he entered the Michigan Governor race back in June, 2013. He currently has roughly $1 million on hand, or a quarter of what Snyder boasts. Further, as an evident sign of struggle, Schauer has applied for public financing, which translates into smaller campaign expenditures. Though a Super PAC isn’t barred from topping expenses, the amount he spends between now and the August primary will likely be under $2 million.

Officially announcing at the end of May, at one time it appeared that Schauer was positioned strong to possibly unseat Gov. Rick Synder. Democrats did view Snyder as vulnerable, and publicly state that they still do, at least more vulnerable than other Midwest governors in blue or purple states, i.e. Governors Walker and Kasich.

However, the bankruptcy of Detroit turned that all around far more than other pundits seem to acknowledge. In surveys released during and after the Detroit disaster, voters widely approve of how Gov. Snyder handled the Democratic-induced financial crisis. We observe the same trend when we look at polling in the Michigan Senate race, which is rated a “Toss-Up” on the PeoplesPunditDaily.com 2014 Senate Map Predictions. Following a federal judge ruling on behalf of Snyder and the taxpayers of Michigan, there is little argument left for the Democrats to make.

In fact, Gallup party ID and PVI measurements both show Michigan moving somewhat to the right of the political spectrum. In the case of the Partisan Voting Index, in 2010 it measured at D+4 when Republicans made significant gains in the statehouse and legislature. In 2014, the PVI is predicted to again be D+4, which does represent a slight rightward movement due to population growth from minorities. We should have expected to tick up a bit in favor of Democrats if all other demographics remain stagnant.

Similarly, the annual Gallup party ID measurement of individual states found Michigan to be leaning Democrat in partisan identification. The year prior, it was solidly Democratic.

With what appears to be strong support from independents and conservative Michigan, the biggest problem the Democratic challenger will have in Michigan will be if urban strongholds remain fed up with the Democratic Party. We have seen Democrats’ inability to turn out their base in midterm elections time and time again. These numbers, and the predicted 2014 midterm electorate, could change at some point in the future. But, for now, this race is rated “Likely Republican.” And barring a change, this is another Midwest governorship that will likely stay under Republican control.

View Polling Below Or Return To 2014 Governor Map

Ohio Governor Race Analysis: Will Kasich Eke It Out Or Hand FitzGerald A Buckeye Blowout?