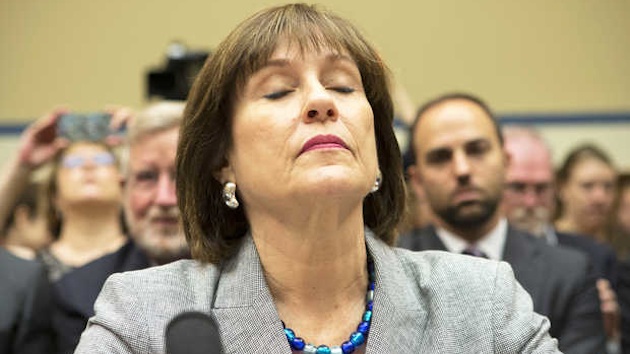 Newly obtained IRS emails not only reveal that Cincinnati clearly took direction from Washington D.C., but also that Lois Lerner, the former head of the unit that targeted conservative groups, practically begged her then-supervisor Joseph Grant not to visit the Cincinnati office or ask specific questions pertaining to congressional inquiries.

The Republican-controlled House voted in May of last year to hold Lerner in contempt, but outgoing Attorney General Eric Holder has refused to charge her or even further investigate the scandal. However, through multiple lawsuits filed by the government watchdog group Judicial Watch, who released the emails Wednesday, details of the systemic abuse of authority at the Internal Revenue Service have emerged incrementally.

“These new documents, withheld for years contrary to law, suggest that a top IRS official may have obstructed investigations into the IRS scandal,” said Judicial Watch President Tom Fitton. “Even Lois Lerner objected to her boss’s travel to the infamous Cincinnati IRS office, falsely accused by Barack Obama as being solely responsible for the abuse of the First Amendment rights of his critics.”

On May 8, 2013, only a few days before the IRS scandal became public, then-Acting IRS Commissioner Steven Miller promoted Grant to TE/GE Commissioner, a position that put him in the role to “oversee the administration of tax law relating to employee plans, tax-exempt organizations and various government entities.” Coincidentally, or not, Miller announced his resignation on May 15, 2013, and Grant announced his retirement the very next day. 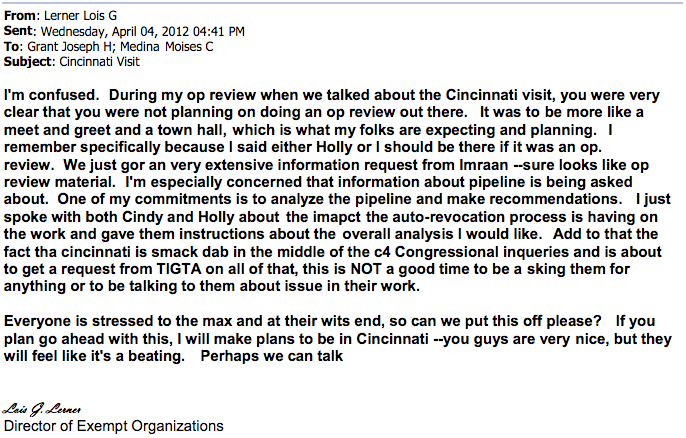 In the email below, which was obtained in response to a federal court order issued for the the October 9, 2013, Freedom of Information Act (FOIA) lawsuit involving four separate FOIA requests about the IRS scandal, a frantic Lois Lerner begs Grant to postpone a tough meeting. Grant attempts to calm Lerner by telling her it was “just a visit, not an OP (Official Planning) review” [parenthesis added]. 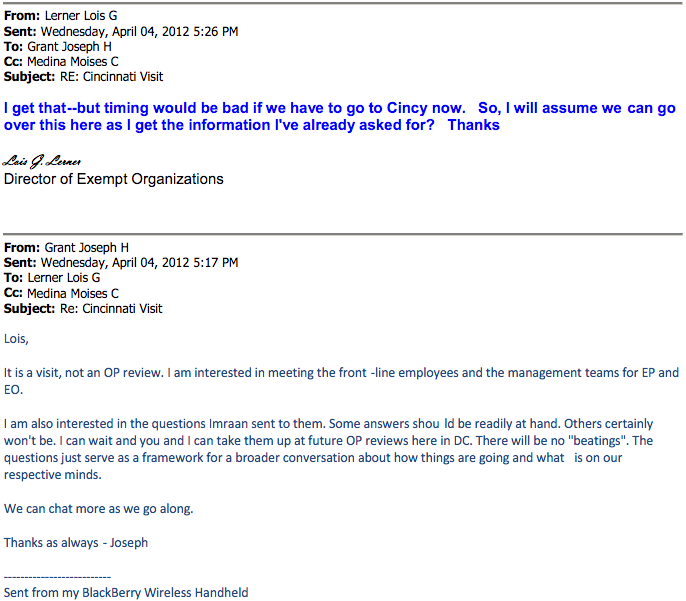 Lerner was clearly panicked by the pending investigation from the Treasury Inspector General for Tax Administration (TIGTA). When we compare their findings to Lerner’s claims, then it’s easy to understand why.

In May 2013, Lerner publicly blamed the IRS’s practice of targeting conservatives on “low-level” employees in Cincinnati, which President Obama echoed by claiming it was the result of “bonehead decisions in local offices.” He repeated that claim in an interview with Bill O’Reilly shortly after, adding that there was “not even a smidgen of corruption” at the IRS.

However, a Feb. 29, 2012 email exchange revealed that the Exempt Organizations (EO), which is located in Washington D.C., had been approving the process of reviewing 501(c)4 tax-exempt applications. Further, in the same email thread, Holly Patz, a Lerner lacky and the agency’s former director of the Office of Rulings and Agreements, alleged an “uptick in applications from advocacy organizations early in 2010.”

But that’s just not accurate, and was directly contradicted by the May 14, 2013, TIGTA report. The report, which the email above shows Lerner was very concerned over, found that applications actually declined in 2010.

In response to that email, Lerner expressed an urgency to speak with Patz on the phone, ending what is a public email thread subject to subpoena. 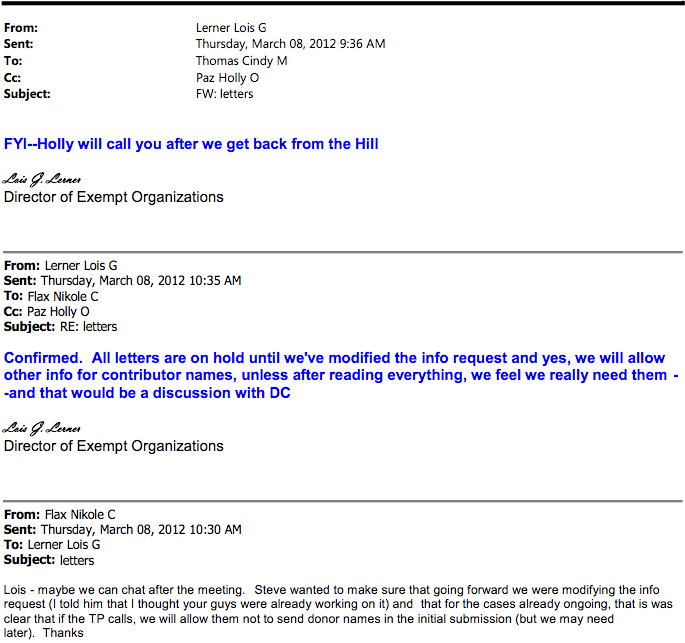 “These documents also show the IRS knew early on that it was abusing its authority and innocent Americans through burdensome information requests and improper collection of the names of donors to groups that threatened Obama’s reelection,” Fitton added. “This IRS scandal is just getting started. Obama’s cover up of his administration’s suppression of his political opposition continues to unravel.”

Mr. Fitton may just be right. Majority Leader Mitch McConnell has repeatedly promised to investigate the IRS scandal further. With the Republican Senate possessing subpoena powers the House could not enforce, they certainly have the means to do so.