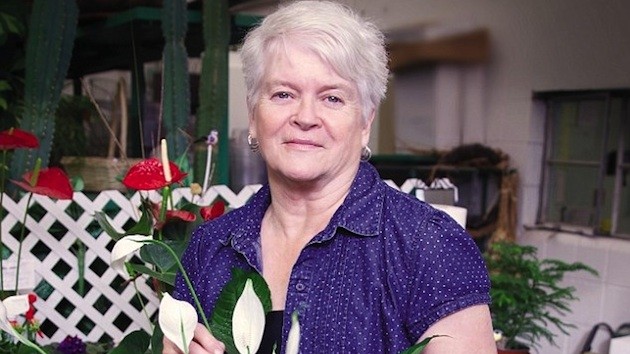 Washington floral artist Barronelle Stutzman on Friday sent a letter to Attorney General Bob Ferguson to decline the settlement offer he made to her.

Who’d have thought the next national debate on same-sex rights would take flight on the courageous wings of a 70-year-old woman?

But that’s what occurring through Barronelle Stutzman, a white-haired Washington florist with the guts of a field general and the moral righteousness and humble spirit of a true disciple of God. In the more material, she’s a Washington florist who refused to provide business services to a same-sex couple seeking to marry because of her staunch Christian beliefs – and because she thought the First Amendment provided her protection to exercise those beliefs.

Turns out, not in Washington.

Benton County Superior Court Judge Alex Ekstrom ruled a few days ago that Stutzman violated Washington’s Law Against Discrimination as well as its Consumer Protection Act by denying service to Robert Ingersoll and his gay partner, Curt Freed. The ruling – along with an earlier one – clears the way for the state and the Ingersoll-Freed couple to pursue damages and legal fees against both Stutzman and her business.

“The message of these rulings is unmistakable: the government will bring about your personal and professional ruin if you don’t help celebrate same-sex marriage,” said Kristen Waggoner, senior counsel with the Alliance Defending Freedom, the nonprofit that’s representing Stutzman. “Laws that are supposed to prohibit discrimination might sound good, but the government has begun to use these laws to hurt people – to force them to conform and to silence and punish them if they don’t violate their religious beliefs on marriage.”

Indeed. Where are Stutzman’s rights to live her life in accordance with her Christian view – which includes biblical denouncement of the sin of homosexuality as an abomination?

Some might argue that homosexuality should be afforded the same legal protections as gender and ethnicity – but that’s a comparison of apples to oranges, when considered through the lens of the Bible. In other words, biblical sins don’t cover gender or skin color.

And while some might press that homosexuals are born gay, or that love is love, no matter the gender, the Christian response to those lines of thought are pretty blunt: That’s ridiculous. Why would God deem homosexuality an abomination and then create gay humans, or give the A-OK to same-sex acts so long as they’re rooted in love? As if God’s just a jokester – or worse, devious entrapper?

But now Stutzman is facing a serious financial hit that could cripple her business.

Attorney General Bob Ferguson, in a news release to the media, presented what he no doubt saw as a reasonable settlement offer for Stutzman to climb out of her predicament. The terms: Pay $2,001 and drop any fight over First Amendment rights. Oh, and one more thing: go provide business services to gays.

Thanks, but no thanks.

“Your offer reveals that you don’t really understand me or what this conflict is all about,” she said, in a written statement. “It’s about freedom, not money.”

She said similarly in a Fox News interview: “It’s about freedom. It’s about my eight kids and 23 grandkids … You can’t buy my freedom.”

And then to the National Religious Broadcasters International Christian Media Convention in Nashville, Stutzman delivered these emotional words: “Do I not have the right to believe in Christ or to follow him? … Christians [need] to take a stand. It’s me today, but it will be you tomorrow. You cannot sit this one out.”

Quite right. Our First Amendment freedoms depend on it. Kudos to a 70-year-old grandmother for standing strong for faith, and for inspiring others to do the same.

Sen. Manchin: Keystone Pipeline 'Will Be Built Sooner Or Later'