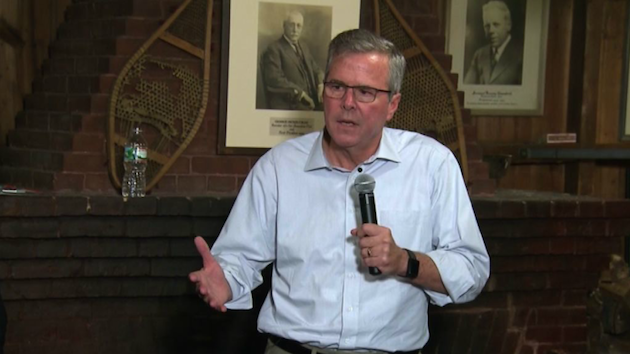 “I think that Presidents have the right to pick their team,” Bush told a crowd of roughly 100 voters. “The longer it takes to confirm her, the longer Eric Holder stays as Attorney General. Look at it that way.”

Bush’s comments came as he was taking questions at a town hall with Republican primary voters at the Snowshoe Club in New Hampshire.

However, despite Mr. Bush’s interpretation, presidents do not “have the right to pick their team,” according to the U.S. Constitution. They have the right to nominate their team and the U.S. Senate has a right and a duty to confirm or reject that nomination if they see warrant to do either.

“The president shall nominate, and by and with the Advice and Consent of the Senate, shall appoint Ambassadors, other public Ministers and Consuls, Judges of the supreme Court, and all other Officers of the United States . . . . ”

GOP senators, including at least two who are also running for president, Sens. Cruz and Paul, have serious concerns over Lynch’s nomination. Among the concerns are Lynch’s refusal to acknowledge the arbitrary enforcement of federal law under Attorney General Eric Holder and President Obama, particularly on immigration, her involvement in the administration’s decision not to prosecute HSBC (NYSE:HSBC) for laundering funds for Mexican drug cartels and Middle Eastern governments, such as Iran.

The issue of immigration did come up at the 60-minute town hall, as it will likely do again and again in the coming months. Bush was questioned at the event, dubbed Politics and Pie, regarding his support for comprehension immigration reform.

“I respect your view,” Bush told one voter. “But I don’t have to agree with it.”

Bush currently trails Wisconsin Gov. Scott Walker by just 1-point in the first-in-the-nation primary state of New Hampshire, according to the PPD average of polls.

Gov. Mike Huckabee Will Announce 2016 Plans In Arkansas On May 5 (Video)