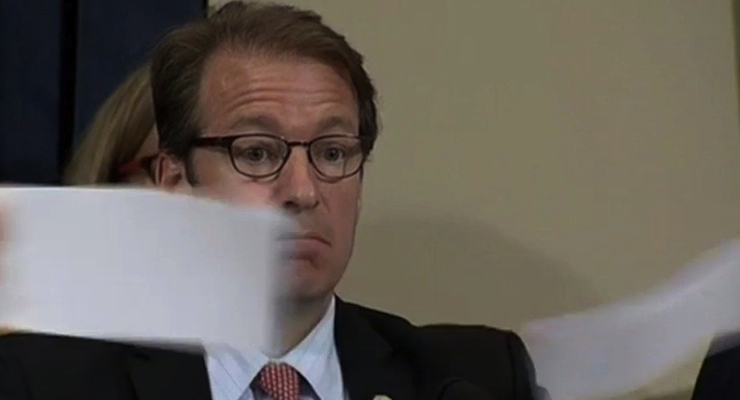 Of course, as Rep. Roskam pointed out, they didn’t have their close friends–who also work at the Clinton Foundation–asking them to do so in order to push their business interests, i.e. Sidney Blumenthal.

Jake Sullivan, your chief foreign policy adviser, wrote a tick- tock on Libya memo on August 21, 2011. And this was the day before the rebels took Tripoli. He titles it, quote, “Secretary Clinton’s Leadership on Libya,” in which he describes you as, quote, “a critical voice” and, quote, “the public face of the U.S. effort in Libya and instrumental in tightening the noose around Gadhafi and his regime.”

But that didn’t come easy, did it? Because you faced considerable opposition, and I can pause while you’re reading your notes from your staff.

FMR. SECRETARY OF STATE HILLARY CLINTON: One thing at a time, Congressman.

ROSKAM: OK. That didn’t come easy, did it, that leadership role and that public face and so forth that I just mentioned?

CLINTON: (OFF-MIKE) this is an issue that the committee has raised. And it really boils down to why were we in Libya; why did the United States join with our NATO and European allies, join with our Arab partners to protect the people of Libya against the murderous planning of Gadhafi. Why did we take a role alongside our partners in doing so.

There were a number of reasons for that. And I think it is important to remind the American people where we were at the time when the people of Libya, like people across the region, rose up demanding freedom and democracy, a chance to chart their own futures. And Gadhafi…

ROSKAM: I take your point.

CLINTON: … Gadhafi threatened them with genocide, with hunting them down like cockroaches. And we were then approached by, with great intensity, our closest allies in Europe, people who felt very strongly — the French and the British, but others as well — that they could not stand idly by and permit that to happen so close to their shores, with the unintended consequences that they worried about.

And they asked for the United States to help. We did not immediately say yes. We did an enormous amount of due diligence in meeting with not only our European and Arab partners, but also with those were heading up what was called the Transitional National Council. And we had experienced diplomats who were digging deep into what was happening in Libya and what the possibilities were, before we agreed to provide very specific, limited help to the European and Arab efforts.

We did not put one American soldier on the ground. We did not have one casualty. And in fact, I think by many measures, the cooperation between NATO and Arab forces was quite remarkable and something that we want to learn more lessons from.

ROSKAM: Secretary Clinton, you were meeting with opposition within the State Department from very senior career diplomats in fact. And they were saying that it was going to produce a net negative for U.S. military intervention.

For example, in a March 9th, 2011 e-mail discussing what has become known as the Libya options memo, Ambassador Stephen Mull, then the executive secretary of the State Department and one of the top career diplomats, said this, “In the case of our diplomatic history, when we’ve provided material or tactical military support to people seeking to drive their leaders from power, no matter how just their cause, it’s tended to produce net negatives for our interests over the long term in those countries.”

Now, we’ll come back to that in a minute. But you overruled those career diplomats. I mean, they report to you and you’re the chief diplomat of the United States. Go ahead and read the note if you need to.

ROSKAM: I’m not done with my question. I’m just giving you the courtesy of reading your notes.

They were — they were pushing back, but you overcame those objections. But then you had another big obstacle, didn’t you, and that was — that was the White House itself. There were senior voices within the White House that were opposed to military action — Vice President Biden, Department of Defense, Secretary Gates, the National Security Council and so forth.

But you persuaded President Obama to intervene militarily. Isn’t that right?

CLINTON: Well, Congressman, I think it’s important to point out there were many in the State Department who believed it was very much in America’s interests and in furtherance of our values to protect the Libyan people, to join with our European allies and our Arab partners. The ambassador, who had had to be withdrawn from Libya because of direct attacks — or direct threats to his physical safety, but who knew Libya very well, Ambassador Cretz, was a strong advocate for doing what we could to assist the Europeans and the Arabs.

CLINTON: I think it’s fair to say there were concerns and there were varying opinions about what to do, how to do it, and the like. At the end of the day, this was the president’s decision. And all of us fed in our views. I did not favor it until I had done, as I said, the due diligence speaking with not just people within our government and within the governments of all of the other nations who were urging us to assist them, but also meeting in-person with the gentleman who had assumed a lead role in the Transitional National Council.

So it is of course fair to say this is a difficult decision. I wouldn’t sit here and say otherwise. And there were varying points of view about it. But at the end of the day, in large measure, because of the strong appeals from our European allies, the Arab League passing resolution urging that the United States and NATO join with them, those were unprecedented requests.

And we did decide in recommending to the president there was a way to do it. The president I think, very clearly had a limited instruction about how to proceed. And the first planes that flew were French planes. And I think what the United States provided was some of our unique capacity. But the bulk of the work militarily was done by Europeans and Arabs.

ROSKAM: Well I think you are underselling yourself. You got the State Department on board. You convinced the president, you overcame the objections of Vice President Biden and Secretary of Defense Gates, the National Security Council. And you had another obstacle then, and that was the United Nations.

And you were able to persuade the Russians, of all things, to abstain, and had you not been successful in arguing that abstention, the Security Council Resolution 1973 wouldn’t have passed because the Russians had a veto. So you overcame that obstacle as well, right? Isn’t that right?

CLINTON: Well congressman, it is right that doing my due diligence and reviewing the various options and the potential consequences of pursuing each of them, I was in favor of the United States joining with our European allies and our air partners and I also was in favor of obtaining U.N. Security Council support because I thought that would provide greater legitimacy. And that of course, our ambassador to the U.N. was very influential and successful in making the case to her colleagues. But this was at the behest of the president once he was presented with the varying argument.

ROSKAM: And you presented the argument… CLINTON: Congressman, I have been in a number of situation room discussions. I remember very well, the very intense conversation over whether or not to launch the Navy SEALS against the compound we thought in (inaudible) that might house bin Laden.

There was a split in the advisers around the president. Eventually the president makes the decision. I supported doing what we could to support our European and Arab partners in their effort on a humanitarian basis, a strategic basis, to prevent Gadhafi from launching and carrying massacres.

ROSKAM: There was another obstacle that you overcame and that was the Arabs themselves. Jake Sullivan sent you an e-mail, and he said this, “I think you should call. It will be a painful 10 minutes. But you will be the one who delivered Arab support.” And that’s a Jake Sullivan e-mail of March 17th to you asking you to call the secretary general of the Arab League.

CLINTON: Well, congressman, I was the secretary of state. My job was to conduct the diplomacy. And the diplomacy consisted of a long series of meetings and phone calls both here in our country and abroad to take the measure of what people were saying and whether they meant it.

We had heard sometimes before from countries saying, well, the United States should go do this. And when we would say, well, what would you do in support of us, there was not much coming forth. This time, if they wanted us to support them in what they saw as an action vital respective to their respective national security interests, I wanted to be sure they were going to bear the bulk of the load. And in fact, they did. What the United States did, as I said, was use our unique capacities. As I recall, if you want if you monetary terms, slightly over a billion dollars or less than we spend in Iraq in one day, is what the United States committed in support of our allies. We asked our allies to do a lot for us Congressman, they had asked is for us to help them.

Our Libya policy be couldn’t have happened without you because you were its chief architect. And I said we were going to go back to Ambassador Mulls’ warning about using military for regime change, and he said, “Long-term things weren’t going to turn out very well. And he was right. After your plan, things in Libya today are a disaster. I yield back.

CLINTON: Well, we’ll have more time I’m sure to talk about this because that’s not a view that I will ascribe to.