HomeNewsPoliticsHas Obama Been Good or Bad for Big Government and the Democratic Party?

Has Obama Been Good or Bad for Big Government and the Democratic Party? 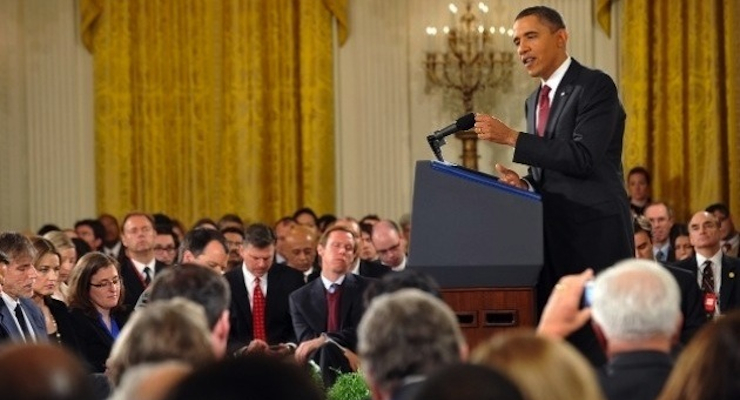 President Barack Obama during a press conference following his party’s historic defeat the day after the 2014 midterm elections. (Photo: AP)

Several years ago, I shared some analysis suggesting that voting for ObamaCare resulted in about 25 Democrats losing their congressional seats in 2010. And since more Democrats presumably lost seats in 2012 and 2014 because of that costly and misguided scheme, it surely seems that expanding government’s role in health care was a net negative for the Democratic Party.

Being a contrarian, however, I then suggested in my analysis that ObamaCare nonetheless might be a net plus for Democrats, at least in the long run. Simply stated, as more and more people get ensnared in the quicksand of government dependency, that creates an ever-growing bloc of voters who may think that it is in their interest to support politicians who advocate for bigger government.

Let’s expand on that issue today.

Some of my Republican friends (I’m willing to associate with all sorts of disreputable people) have been making the point that President Obama has crippled the Democratic Party.

And they have a compelling case. If you compare the number of Democrats in the House and Senate when Obama took office with the amount that there are today, it’s clear that the President has been very bad news his party.

I suppose a defender of the President somehow might argue that the losses for congressional Democrats would have been more severe without Obama, but that would be a huge intellectual challenge.

Perhaps even more important, there’s been a giant loss of Democratic state legislators during Obama’s tenure, with more than 900 seats going from Democrat control to Republican control.

That’s resulted in a huge shift in the partisan control of state legislatures. Which, by the way, has very important implications for Congress because of the redistricting that takes place every 10 years.

So it seems like Republicans are in a good situation. They control Congress and they control most of the states. And if GOPers pick up the White House in 2016, it surely seems like that would be the icing on the cake for those who say Obama was bad news for the Democrats. But now let me give some encouraging news for my Democrat friends (like I said, I consort with shady people).

First, Republican control doesn’t necessarily mean a shift away from big government. Indeed, we saw just the opposite during the Bush years.

Second, even if small government-oriented Republicans controlled Washington after the 2016 election, that might not change the nation’s long-run trend toward more dependency.

These are some of the issues I explore in this CBN interview.

The most relevant point in the interview, in my humble opinion, was the discussion about one-third of the way through the interview. I talked about the “ratchet effect,” which occurs when the statists expand the size and scope of government a lot and good policy makers then get control and reduce it by only a small amount.

Stay in that pattern long enough and you eventually become Greece (which is why I emphasized in the interview the need to reverse this trend with big systemic changes such as genuine entitlement reform).

No wonder we’ve been identified as America’s most effective think tank.