Based on a new report from the Congressional Budget Office, I wrote two weeks ago about America’s dismal long-run fiscal outlook. Simply stated, we face a Greek-style fiscal future because of changing demographics and poorly designed entitlement programs.

But I was just looking at big-picture fiscal aggregates. 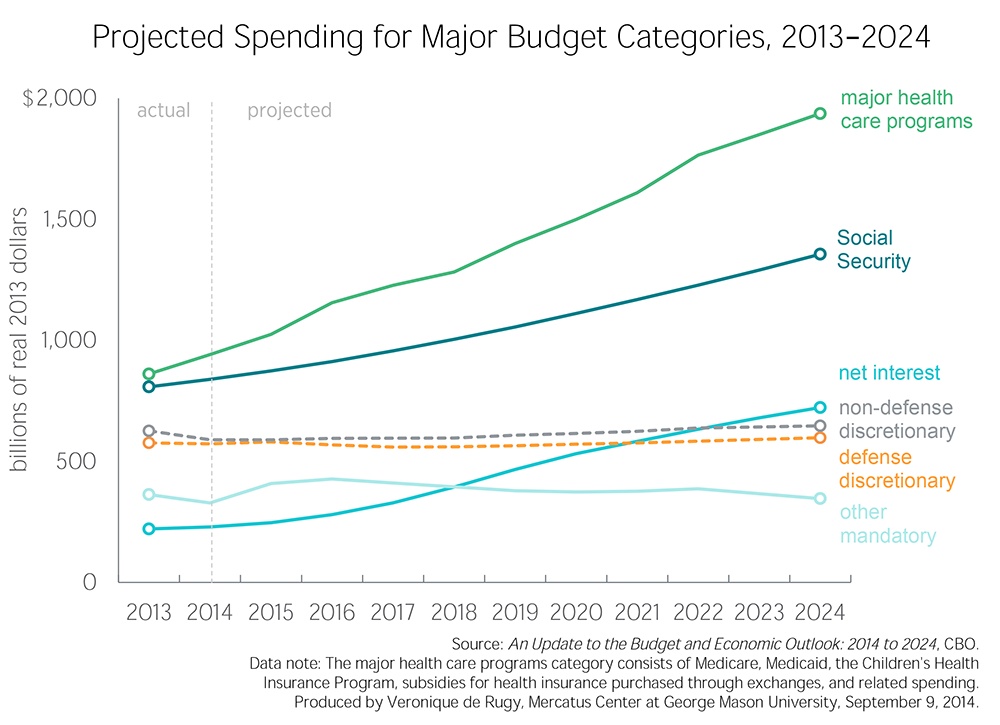 And while that was discouraging, it gets downright depressing when you look behind the numbers and consider how a growing share of Americans are getting lured into government dependency.

Nicholas Eberstadt of the American Enterprise Institute has a very grim analysis on the growth of entitlement dependency in the United States.

The American welfare state today transfers over 14% of the nation’s GDP to the recipients of its many programs, and over a third of the population now accepts “need-based” benefits from the government. This is not the America that Tocqueville encountered.

It wasn’t always this way.

The article looks at the history of the welfare state in America.

But things began to deteriorate under LBJ.

During the 1960s, …President Johnson’s “War on Poverty” (declared in 1964) and his “Great Society” pledge of the same year ushered in a new era for America, in which Washington finally commenced in earnest the construction of a massive welfare state. … Americans could claim, and obtain, an increasing trove of economic benefits from the government simply by dint of being a citizen; they were now incontestably entitled under law to some measure of transferred public bounty, thanks to our new “entitlement state.”

And guess what? Once we started rewarding dependency, more and more people decided they were entitled.

Over the half-century between 1963 and 2013, entitlement transfers were the fastest growing source of personal income in America — expanding at twice the rate for real per capita personal income from all other sources, in fact. Relentless, exponential growth of entitlement payments recast the American family budget over the course of just two generations. In 1963, these transfers accounted for less than one out of every 15 dollars of overall personal income; by 2013, they accounted for more than one dollar out of every six. The explosive growth of entitlement outlays, of course, was accompanied by a corresponding surge in the number of Americans who would routinely apply for, and accept, such government benefits.

And how many people have been lured into government dependency? A lot, and mostly because of welfare spending rather than age-related social insurance programs such as Social Security and Medicare.

…the government did not actually begin systematically tracking the demographics of America’s “program participation” until a generation ago. Such data as are available, however, depict a sea change over the past 30 years. …By 2012, the most recent year for such figures at this writing, Census Bureau estimates indicated that more than 150 million Americans, or a little more than 49% of the population, lived in households that received at least one entitlement benefit….Between 1983 and 2012, by Census Bureau estimates, the percentage of Americans “participating” in entitlement programs jumped by nearly 20 percentage points….Less than one-fifth of that 20-percentage-point jump can be attributed to increased reliance on these two “old age” programs. Overwhelmingly, the growth in claimants of entitlement benefits has stemmed from an extraordinary rise in “means-tested” entitlements.

Ugh. I’ve previously written that getting something from the government doesn’t automatically turn somebody into a moocher or a deadbeat.

Nonetheless, it can’t be good news that 49 percent of U.S. households are on the receiving end for goodies from Uncle Sam.

Here’s a table from his article that should frighten anyone who thinks work and self-reliance are worthwhile values. 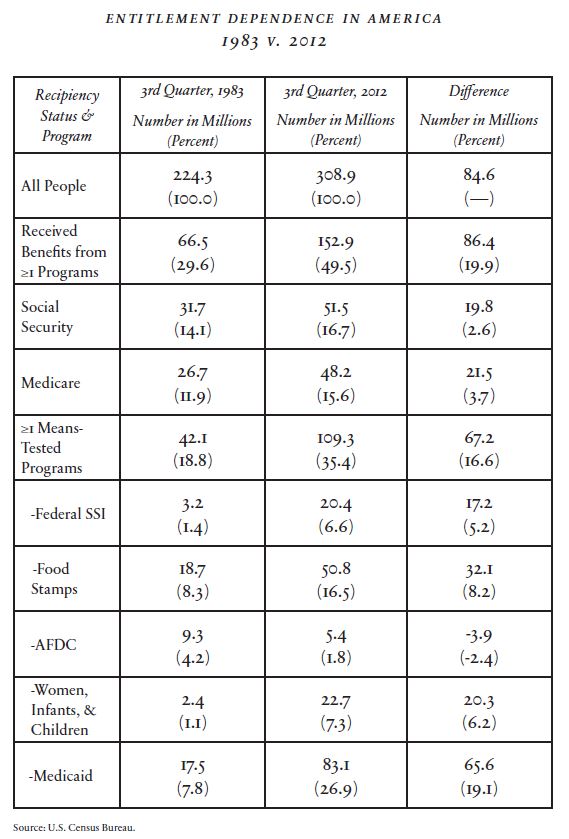 There’s lot of information, so I recommend just focusing on the numbers in parentheses in the first two columns. Those show how dependency is increasing by significant amounts for many programs.

Eberstadt highlights some of the worst numbers, most notably the huge growth in food stamps and Medicaid dependency.

…the rolls of claimants receiving food stamps (a program that was officially rebranded the Supplemental Nutrition Assistance Program, or SNAP, in 2008 because of the stigma the phrase had acquired) jumped from 19 million to 51 million. By 2012 almost one American in six lived in a home enrolled in the SNAP program. The ranks of Medicaid, the means-tested national health-care program, increased by over 65 million between 1983 and 2012, and now include over one in four Americans. …Between 1983 and 2012, the number of Americans in households receiving Federal SSI more than sextupled; by 2012, over 20 million people were counted as dependents of the program.

As bad as these numbers are, the most worrisome part of the article is when Eberstadt writes about the erosion of America’s cultural capital.

Asking for, and accepting, purportedly need-based government welfare benefits has become a fact of life for a significant and still growing minority of our population: Every decade, a higher proportion of Americans appear to be habituated to the practice. … nearly half of all children under 18 years of age received means-tested benefits (or lived in homes that did). For this rising cohort of young Americans, reliance on public, need-based entitlement programs is already the norm — here and now. It risks belaboring the obvious to observe that today’s real existing American entitlement state, and the habits — including habits of mind — that it engenders, do not coexist easily with the values and principles, or with the traditions, culture, and styles of life, subsumed under the shorthand of “American exceptionalism.”

And the erosion of cultural capital is very difficult to reverse, thanks in large part to the welfare-aided erosion of traditional families and falling levels of work among males.

The corrosive nature of mass dependence on entitlements is evident from the nature of the pathologies so closely associated with its spread. Two of the most pernicious of them are so tightly intertwined as to be inseparable: the breakdown of the pre-existing American family structure and the dramatic decrease in participation in work among working-age men. …the rise of long-term entitlement dependence — with the concomitant “mainstreaming” of inter-generational welfare dependence — self-evidently delivers a heavy blow.

Since this has been an utterly depressing analysis so far, let’s close with a vaguely optimistic look at the future.

While it may not be easy to reverse the erosion of cultural capital, it is simple (at least in theory) to reverse bad policies.

All we need to do is enact genuine entitlement reform and devolve all means-tested redistribution spending to the states.

P.S. This is some great work by AEI, which follows on the stellar analysis that organization recently produced on income inequality. Makes me almost want to forgot that AEI put together a somewhat disappointing fiscal plan.