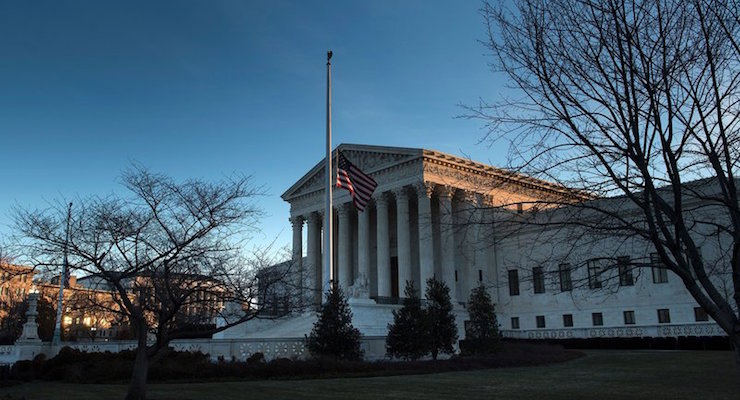 An American flag flies at half staff outside the U.S. Supreme Court after the death of Justice Antonin Scalia. (Photo: Brenda Smialowski/AFP/Getty)

The death of Justice Antonin Scalia has sparked a debate over if and when the U.S. Senate should consider a Supreme Court nominee to replace his conservative voice. Democrats have accused Republicans of using the politics of obstruction to block Obama’s nominee to replace Scalia, but the historical record shows they are far more guilty of using such tactics to shape the court.

Below is a list of the longest waits for presidential nominees to the Supreme Court, according to the Congressional Research Service (CRS), which considers the time the nominee is received in Congress to the end of the Advice and Consent confirmation process. Of the 15 longest, 10 were rightwing or conservative nominees, while only 4 were leftwing Supreme Court nominees and 1 independent nominee.

We’ll explain more below, but those raw numbers are actually very misleading. One of the 4 leftwing Supreme Court nominees was not even held up by obstructionist Republicans playing politics, but rather he was held up due to circumstances that were ultimately more favorable to the Progressive Movement. Yet another leftwing Supreme Court nominee simply wasn’t prioritized by a Democratically-controlled Senate.

You may notice that we’ve considered Melville W. Fuller, who presided over the court when they rightly declared the income tax law unconstitutional in Pollock v. Farmers’ Loan & Trust Co., 157 U.S. 429, a rightwing appointment. While President Grover Cleveland was a Democrat, he was the last of the Bourbon Democrats, who rejected big government and cronyism in favor of free markets and individual liberty.

Further, one of the aforementioned leftwing nominees on the list was nominated by Lyndon B. Johnson. He took a relatively long time to confirm, but that wasn’t the fault of his political opposition. The Democratic Party held a huge 68 to 32 supermajority in the upper chamber. However, he waited in the wind because they were more focused on the War on Poverty than they were on filling the “immediate vacancy” on the court, as Sen. Elizabeth Warren recently claimed.

Bottom line: While Democrats have sought to once again slap Republicans with the label of obstructionists, the historical record shows the Left has played that role, not the Right.

108 days — Robert H. Bork was nominated by Ronald Reagan and, though arguably the most qualified man to be considered in at least a century, he was rejected in a 58-42 vote on Oct. 23, 1987. There were 12 public hearings, the first of which Democrats held a whole 70 days after his initial nomination. Bork was the last of about a dozen nominees who were outright rejected by the U.S. Senate.

108 days — Potter Stewart was nominated by Dwight D. Eisenhower and confirmed by 70-17 vote on May 5, 1959. Stewart was one of three recess appointments made by a president and all were made by Eisenhower, who was a war hero beloved by the American people but hated by Democrats.

100 days — Abe Fortas was nominated by Lyndon B. Johnson but withdrew after being nominated for chief justice on Oct. 4, 1968. The Congress held 11 public hearings, the first of which was held 15 days after his initial nomination. Worth noting, one of the few nominations by a Democratic president was actually held up by circumstance, not by Republicans playing politics.

100 days — Homer Thornberry was also nominated by Lyndon B. Johnson but withdrew on Oct. 4, 1968. The Senate held 11 public hearings that started 15 days after his nomination.

99 days — Clarence Thomas was nominated by George H.W. Bush and finally confirmed by a 52-48 vote on Oct. 15, 1991. The Senate held 11 public hearings, which didn’t start until 64 days after his nomination. The eventual confirmation of Justice Thomas only came after one of the dirtiest, politically sleazy attempted character assassinations in the history of the Republic.

96 days — Reuben H. Walworth was nominated by John Tyler and his name was withdrawn on June 14, 1844. Tyler, however, was a political independent and his nomination, though withdrawn, was more leftwing statist than conservative textualist.

92 days — Clement F. Haynsworth Jr. was nominated by Richard Nixon and rejected in a 55-45 vote on Nov. 21, 1969. The Democratic, and openly hostile Senate, conducted 8 public hearings, the first of which was 26 days after his nomination.

89 days — William H. Rehnquist was nominated by Ronald Reagan and ultimately confirmed as chief justice in a 65-33 vote on Sept. 17, 1986. The Senate held just 4 public hearings in that time, the first of which was 39 days after his nomination.

87 days — Elena Kagan was nominated by Barack Obama and confirmed by a 63-37 vote on Aug. 5, 2010. The Democratically-controlled Senate held just 4 public hearings, the first of which was 49 days after her nomination. None of the political opposition even raised her past defense of ObamaCare in court on behalf of the administration or sexual orientation at the hearings. Not that we particularly care what that orientation was and is, but these two cases were making their way through the courts at the time, yet many Republicans ultimately joined with Democrats to confirm her.

85 days — Antonin Scalia was nominated by Ronald Reagan and confirmed by a rare 98-0 vote on Sept. 17, 1986. The Senate held just 2 public hearings with the the late and great Justice Scalia, though the first was 42 days after his nomination.

82 days — Samuel Alito, another currently serving conservative justice on the high court, was nominated by George W. Bush and confirmed by a close 58-42 vote on Jan. 31, 2006. The new Democratic Senate held just 5 public hearings, the first beginning 60 days after his nomination.

79 days — Melville W. Fuller was nominated by the great anti-corruption, Bourbon Democrat Grover Cleveland. He was a conservative pick for a conservative president, who was ultimately confirmed by a 41-20 vote on July 20, 1888. While there were no hearings held, the progressives railed against him as a Copperhead—an anti-war Democrat—and published a tract claiming that the “records of the Illinois legislature of 1863 are black with Mr. Fuller’s unworthy and unpatriotic conduct.” Unfortunately, for them, voters had been sick of the new crony, corrupt relationship between government and big business.

79 days — George Harrold Carswell was nominated by Richard Nixon and ultimately rejected in a 51-45 vote on April 8, 1970. The Democrats in the Senate held just 5 hearings that started 8 days after his nomination. They couldn’t wait to send him packing.

78 days – Thurgood Marshall was also nominated by Lyndon B. Johnson and was confirmed by a 69-11 vote on Aug. 3, 1967. After his big landslide, coat-tail-having win, his party held just 5 public hearings before pushing him through. But political opposition wasn’t the problem. He simply took a back seat to the Great Society, and was forced to wait a bit.

The longest vacancy since the court went to nine justices in 1869 was 391 days. After Abe Fortas resigned from the court in 1969, Richard Nixon’s first two replacement nominees were rejected by Democrats in November of 1969 and April of 1970. Worthing noting, if Obama doesn’t get a nominee through, which looks very likely, then the world will not end. The next president would have until March 12, 2017, before the vacancy record would even be broken.

While President Nixon got four nominees through the Senate and eventually on the court, one of which served as chief justice, he also won his election and reelection with mandate-handing landslides at a time when trust/confidence in government institutions, including the Supreme Court, was far higher than it is now. The same can not be said of President Obama or sentiment at the present time.

As previously stated, the last nominee to be outright rejected was Robert H. Bork in 1987, a Reagan pick. He faced 12 brutal hearings and didn’t even get one until 70 days after his nomination. There have been about a dozen nominees who were outright rejected, the vast majority by the Left.

That said, if you read our analysis on Monday, you would know that we aren’t necessarily condemning those tactics. It simply means that the American Left has been willing to fight harder than the Right for what they believe in. Why condemn the Right for doing the same now. That’s the system of government Scalia defended his entire life and, in 2012, he outright told Chris Wallace on Fox News Sunday that he did not want a liberal to replace him.

Nikki Haley Endorses Marco Rubio After Saying He "Believes in Amnesty, Which I Don't"