Sen. Claire McCaskill, D-Mo., Ranking Member on the Senate Subcommittee on Investigations, asks a question on Capitol Hill in Washington, Thursday, June 23, 2016, during the subcommittee’s hearing to review billing and customer service practices in the cable and satellite television industry. (Photo: AP)

Email records show vulnerable incumbent Senator Claire McCaskill, D-Mo., requested to hide flight data surrounding the use of a private plane from the public. The email records were obtained by the Washington Free Beacon through a Freedom of Information Act request.

In 2012, the Red State Democratic senator came under heavy fire for her use of a private jet at taxpayer expense. She only survived the tough reelection because her Republican opponent Todd Akin made a monumental gaffe about rape.

In a political stunt, she demanded her husband “sell the damn plane.” But shortly after her reelection, the senator and her husband bought a new, more expensive plane. Now they are attempting to avoid similiar scrutiny.

Technically, the plane is owned through TLG Aviation LLC, a McCaskill-owned business entity valued at over $1 million. It’s all detailed on the senator’s personal financial disclosure form for the fiscal year 2016. Aero Charter, the company hired by Senator McCaskill to operate the 2009 Pilatus PC-12/47E, wrote to the Federal Aviation Administration (FAA) earlier in April 2017 to ask for the tracking information on the plane to be blocked from the public. 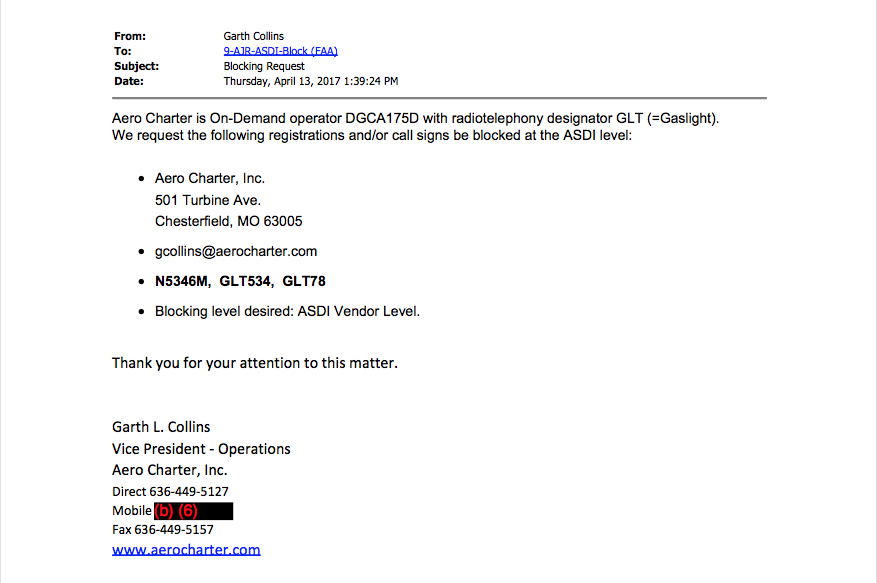 An email from Aero Charter dated Thursday, April 13, 2017 1:39:24 PM has the Subject line “Blocking Request” and requests records for the plane belonging to Claire McCaskill be blocked from the public. (Source: The Washington Free Beacon)

Garth Collins, the Vice President for Operations at Aero Charter, wrote the email asking the FAA to block flight data for the plane belonging to Senator McCaskill.

The Obama Administration, which promised to be the most transparent in history, implemented changes that help Senator McCaskill and others hide such data from the public. In 2013, they eliminated the requirement for owners to cite a “certified security concern” to the FAA if they wanted to block their aircraft data from public display on websites such as FlightAware.com.

Senator McCaskill, 64, is likely on borrowed time in Capitol Hill. The longtime ally of Hillary Clinton is one of 10 Senate Democrats from a state carried by the president in November. President Trump trounced Mrs. Clinton in The Show-Me State 56.77% to 38.14%. Worse still, ticket-splitting fell to 0% in 2016, an ominous sign for any incumbent running in a state their party’s presidential nominee did not carry.

After being the target of recruiting efforts for months, Attorney General Josh Hawley announced he will run for the U.S. Senate in Missouri. The Missouri GOP had been trying to recruit the popular and articulate attorney general, who clobbered his Democratic challenger in 2016. He won 61.1% to just 38.9% for Teresa Hensley, or by more than 500,000 votes.

Supporters loyal to President Trump aren’t happy with Mr. Hawley, who they feel is too establishment. Even a generic Republican in the People’s Pundit Daily (PPD) Big Data Poll has held Senator McCaskill down in the high 30s.

Al Franken on Whether He'll Resign: "I'm Not Going to Get Into That"