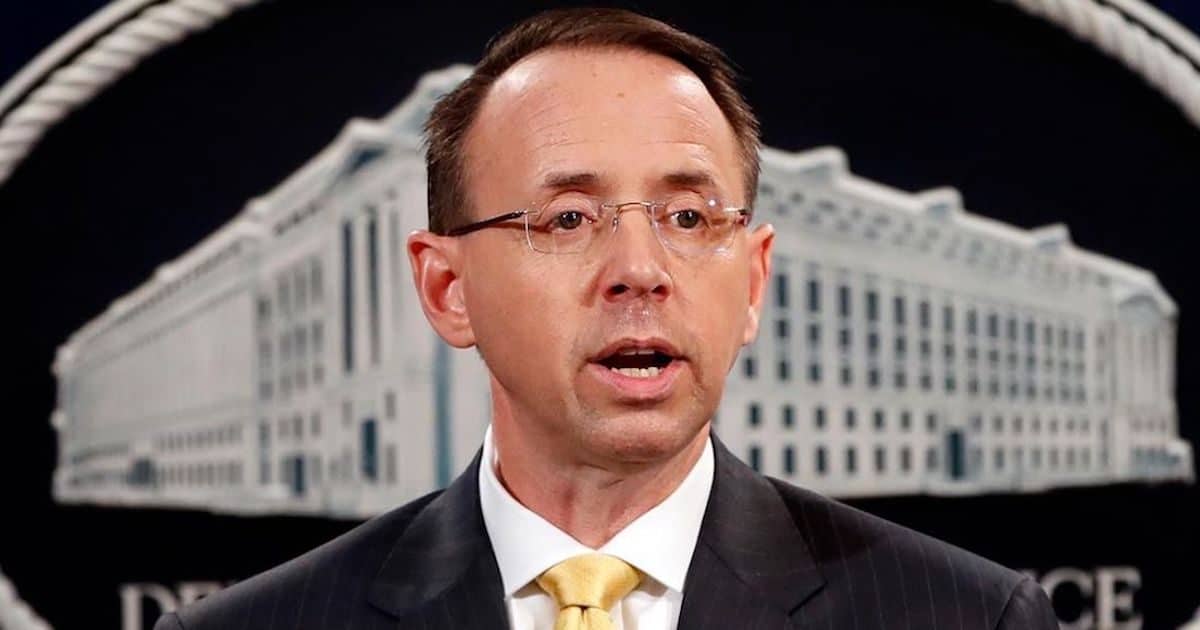 “His devotion to the Department and its professionals is unparalleled,” Attorney General William Barr said, adding he served the Justice Department “with dedication and distinction” in a statement. “Over the course of his distinguished government career, he has navigated many challenging situations with strength, grace, and good humor.”

On April 18, Attorney General Barr and Deputy Attorney General Rosenstein held a press conference to reveal the findings of the Special Counsel, who concluded the investigation on March 22.

Flanked by the deputy attorney general, Attorney General Barr said “the bottom line” is the Special Counsel found no evidence of collusion an no corrupt intent to support obstruction of justice.

Mr. Rosenstein, who appointed Special Counsel Mueller in May 2017, recently defended the handling of the case in the face of critics on both sides of the aisle.

During remarks at the Armenian Bar Association’s Public Servants Dinner on Thursday, April 25, the deputy attorney general said he “did pledge to do it right and take it to the appropriate conclusion.”

“I did not promise to report all results to the public, because grand jury investigations are ex parte proceedings,” he said. “It is not our job to render conclusive factual findings.”

“We just decide whether it is appropriate to file criminal charges.”

While Mr. Mueller offered President Trump and complete exoneration on whether he or anyone conspired with Russians during the 2016 election, he refused to render a judgement on obstruction of justice.

Attorney General Barr and Deputy Attorney General Rosenstein both concluded no charges were warranted. Even though they did not agree with the legal theories Mr. Mueller and his team presented, they nevertheless accepted them in order to make the decision.

“If lawyers cannot prove our case in court, then what we believe is irrelevant,” he said. “But in politics, belief is the whole ball game. In politics – as in journalism – the rules of evidence do not apply. That is not a critique. It is just an observation.”

Initially, Mr. Rosenstein was expected to resign after the U.S. Senate confirmed Attorney General Barr, as multiple sources confirmed. But the new attorney general asked him to stay on until the conclusion of the Special Counsel investigation.

The nation’s second highest law enforcement officer in the land has had a controversial tenure at the Justice Department (DOJ). Congressional investigators repeatedly accused him of stonewalling their investigations into DOJ corruption, including abuses to the Foreign Intelligence Surveillance Act (FISA).

In October 2018, Mr. Rosenstein snubbed then-GOP controlled House Oversight and House Judiciary Committees, both of whom wanted to question him over a report published by The New York Times in September. The report claimed he met with now-disgraced Obama Administration officials to discuss the possibility of entrapping President Trump.

James Baker, formerly the general counsel at the Federal Bureau of Investigation (FBI), told lawmakers in explosive testimony a week before that Mr. Rosenstein “seriously” considered secretly recording the president.

Mr. Baker said he met with fired former FBI deputy director Mr. McCabe and Ms. Page shortly after their meeting with Mr. Rosenstein in May 2017. Mr. McCabe was fired for “lack of candor” and leaking to the media “to advance his personal interests.” Ms. Page and Mr. Baker resigned together in disgrace for their center role in the scandal surrounding the probes into Hillary Clinton and Russia.

All of the heads of the FBI and DOJ under the Obama Administration have been either fired or have resigned in disgrace amid the controversy.

Trump: "Enough" With "Ridiculous" Subpoenas, "Get Back" to Governing