HomeNewsUSKnow Thy Enemy: Compiled ISIS Magazine Issues Reveal Much About the Islamic Caliphate

Know Thy Enemy: Compiled ISIS Magazine Issues Reveal Much About the Islamic Caliphate This image of Islamic State (ISIS) leader Abu Bakr al-Baghdadi was made from video posted on a militant website Saturday, July 5, 2014.

(Editor’s Note: We at People’s Pundit Daily (PPD) debated at great length over whether or not we should make readily available content that could be used to serve the Islamic State’s purpose and goals. However, primary for two reasons, one of which piggybacks off the other, PPD has decided that publishing this material within a certain context can and will do more good than harm.

In the wake of the recent Paris terror attacks engineered by the Islamic State, as well as the subsequent debate over whether or not the U.S. should accept alleged Syrian refugees without adequate vetting, it has become painfully clear that too many Americans are ignorant to Islamism; not just radical Islamists but Islamism or, political Islam. Ultimately, if you hope to defeat an enemy, you must first identify that enemy, understand them, and then commit to defeating them.

Without a significant increase in understanding among the American people, particularly regarding the nature of the threat that facing western civilization, we can never hope to defeat the Islamic State and Islamism.

Thus, PPD has decided to highlight the ISIS magazine Dabiq, a sophisticated periodical publication aimed at recruiting jihadists from the West. Dabiq, a location in Syria that Islamists believe to be the location for one of the final battles against the infidels, is beautifully produced and printed in several languages, including French and English.

All the magazine’s issues can be found below, along with a caption from The Clarion Project, an excellent organization focused on the national security threat to the West posed by radical Islamic terrorism and political Islam. The twelfth issue of the ISIS magazine is simply entitled Just Terror, which brags and celebrates the series of terrorist attacks in Paris, the double-bombing in Beirut, and the planting of a bomb on a Russian Airbus in Sinai. “It spins terrorism in the language of a fairy story, referring to terrorists as ‘knights,’ The Clarion Project said. What is also notable is the unusually high number of ISIS propaganda videos it advertises, which is likely due in large part to the growing number of videos the group has produced. Other pieces continue oft-created and repeated themes in the previous eleven issues, including questioning the legitimacy of other Islamists and attacking them by name, celebrating and retelling its military victories and attacking women who oppose polygyny as those who oppose a fundamental tenet of Islam. 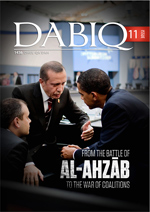 The eleventh issue of the propaganda magazine is called From the Battle of Al-Ahzab to the War of Coalitions. Al-Ahzab is a clear reference to a battle in the Quran between a coalition of Meccan tribes and the Islamic forces. ISIS attacks al-Qaeda and the Taliban for conspiring to conceal the death of Mullah Omar, while attacking the Shiite messiah (Mahdi) and accusing him of being the dajjal (devil) for being in league with Jews. As usual, there is a directive issued to women, urging and directing them to do their duty by having children and taking care of their jihad-fighting husbands.

ISIS Finance: No. We’re not kidding. This issue also reveals their establishment of gold dinars as their official currency and celebrates a recent capturing of a Norwegian and a Chinese hostage, who are offered up for ransom in full page advertisements that could be straight up mistaken for coming out of The New York Times. The tenth issue of the ISIS magazine is called The Laws of All or the Laws of Men. It begins with high praise for the deadly and simultaneous terror attacks in Tunisia, Kuwait and France. They boast over the high number of casualties inflicted in the attack and call on children to obey the will of Allah as interpreted by–guess who?–the Islamic State. They also reveal how “Cubs of the Caliphate” are taught to obey ISIS before their parents, and how wives are told to leave their husbands who fight against them. It also celebrates the non-reported expansions in the Caucasus and recruitment in Afghanistan.

PPD has widely reported on the latter expansion. In recognition of Ramadan, which was when the issue was released, it reminisces over the historical victories of some of the early Muslim armies during Ramadan and attempts to reenforce the holiness of the month for Muslims. The ninth issue of Dabiq magazine is entitled They Plot and Allah Plots, referring to the central feature in this particular magazine issue who argues that ISIS supporters should not fear any plans to defeat. Why? Why else of course. Because Allah already controls the world and he has a plan. “The issue focuses on legitimacy–both attacking that of its enemies in Syria and the surrounding Arab nations, and in building up its own, with pieces on the importance of jihad,” The Clarion Project notes.

“Most shockingly this issue ran a lengthy segments admitting to and justifying sex slavery,” they note. “It threatens to sell US first Lady Michelle Obama into sexual slavery for a third of a dinar.” 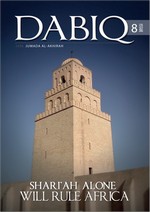 The eighth issue of the ISIS magazine is entitled Shari’ah Alone Will Rule Africa. As is the case with other issues of Dabiq, it underscores and celebrates the recent Islamic State successes. But, at this point, much of that means they had to leave out their strategic defeats in Iraq and Syria and instead focus on Africa. It touts the pledge of allegiance from Boko Haram in Nigeria, which ws just labeled the deadly in terms of number of civilian deaths, and the timely terror attacks in Libya and Tunisia.

Again, this is one of the more critical issues of other groups, attempting to out-recruit the al-Qaeda affiliat Jabhat al-Nusra by attacking its allies as “nationalists” and therefore anti-Islamic. 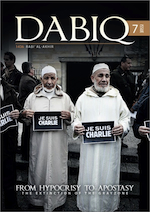 The seventh issue of the Islamic State’s Dabiq magazine is entitled From Hypocrisy to Apostasy, which begins with a declaration of war against Japan. Dabiq then boasts about the murder of the Jordanian pilot, whom they had lit on fire as the Quran dictates should happen to believers-turned-traitors.

It is also a bit of a pep talk for would-be and up-and-coming leaders within the Islamic State, highlighting their commitments to war, gains in Egypt and Libya and reminding them that “Islam is the religion of the sword.” It also includes interviews with various jihadists and western hostage John Cantlie. “Al-Qa’idah of Waziristan: A Testimony From Within,” the sixth issue of Dabiq, begins by taking responsibility for the so-called “lone wolf” terrorist attack in Sydney, Australia that resulted in the death of two at St. Martin’s place. The entire issue serves as a call to the Islamic State’s supporters across the world to carry out killings of Westerners whenever and wherever they can without revealing their intentions by discussing them.

“Most of the rest of the magazine focuses on internal jihadi disputes, criticizing the Islamic State’s detractors from within the jihadi movement,” Clarion correctly notes. 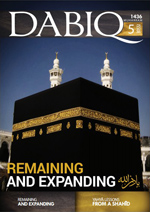 “Remaining and Expanding,” the fifth issue of Dabiq, is named after the Islamic State slogan. Yes, they have a slogan. In this issue, it proudly announces the expansion of the Islamic State into Sinai, Libya, Yemen, Algeria and the Arabian Peninsula after accepting pledges of loyalty (bay’ah) from terrorist groups in all those regions.

Did you miss that report on CNN? “It also announces the minting of gold dinars and silver dirhams in order to separate it from the international fiat currency markets and build the economy of the Islamist state,” Clarion states. 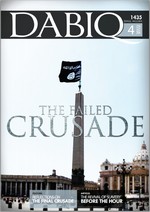 The fourth issue of Dabiq is entitled “The Failed Crusade,” which mocks and downplays attempts by the U.S.-led coalition to counter the Islamic State gains in the region. In this issue, one can really see that the Islamic State regards our current commander-in-chief as a weakling who is waging a political war that is doomed to fail.

“This religion is the one promised with victory,” the issue reads showing the group’s confidence. The picture on the cover is of the iconic St. Peter’s Square in Rome, displaying the group’s ambitions of world conquest. The group has threatened–rather promised–to take Rome and kill the Pope, who now says they must be met with force. Shocker. The third issue of Dabiq, “The Call to Hijrah” is the jihadists’ worldwide call to Muslims around the globe to travel to Iraq and Syria to join the fight to expand the caliphate. Hijrah is the Arabic for “migration” and refers to the journey of the founder of Islam, Mohammed, and his companions from Mecca to Medinah in 622 C.E.

“The comparison is very deliberate and intended to invoke religious nostalgia,” Clarion correctly observes. It also offers some interesting tidbits while you think about the Syrian “refugee” crisis. 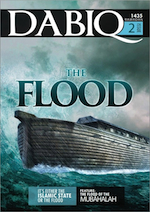 “The Flood,” the second issue of the ISIS propaganda magazine Dabiq, deliberately uses the story of Noah as a metaphor in a concerning message: you are either with the Islamic State, or against them and doomed by God. It calls on all Muslims around the world to pledge loyalty to the Islamic State, move there immediately and support the cause in obedience to Allah. There is also an update read on the attempts to resolve known disputes between the Islamic State and other Jihadi factions, including the al-Qaeda-affiliated Jabhat al-Nusra.

They cite the use of mubahalah, which is an Islamic religious arbitration process. 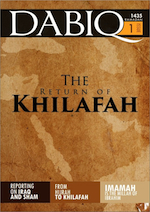 The very first issue of Dabiq was entitled “The Return of Khilafah,” which focuses on the establishment and declaration of the caliphate. The issue explains what that means and, more importantly, what it should mean to all Muslims. A small but important part of the ideology that drives the group–and most Islamists–is explained in the context of the Quran in an attempt to persuade more “moderate” Muslims to join the cause of the caliphate.

It also explains the name of the magazine, and celebrates recent ISIS’ victories, which were many at the time. It also discusses efforts made to build support among local tribal groups, reporting their pledges of loyalty to Abu Bakr al-Baghadi (pictured above), the self-appointed caliph of the Islamic State.