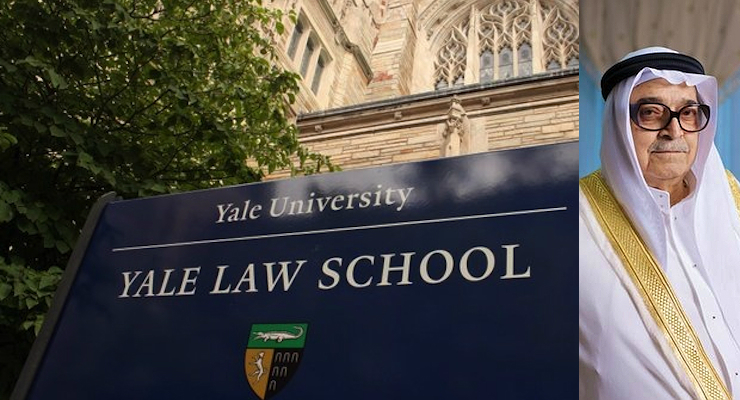 An omission of fact is a purposeful misrepresentation of fact. In a court of law, district attorneys can be severely disciplined for allowing such omissions, particularly when the results are the successful prosecution of an innocent person. Defense attorneys also have to be careful that they, too, do not fall under this ominous ethical charge.

The federal government has regulations regarding the concept of omission of fact, much of it is found in U.S. Code: Title 22 – FOREIGN RELATIONS AND INTERCOURSE. Keep this topic in mind as the concept of foreign relations is foremost in this discussion.

In September, Yale University President Peter Salovey announced that the Ivy League institution was a recipient of $10,000,000 from Abdallah S. Kamel of the Dallah Albaraka (a.k.a. Al Baraka) Group in Saudi Arabia. The contribution is meant for the establishing of an Islamic Law Center in the Law School at Yale, which shall bare the name: Abdallah S. Kamel Islamic Law Center.

According to Mr. Salovey, this center exists for the purpose of disseminating “knowledge and insights for the benefit of scholars and leaders all over the world.” This makes the center within the Law School at Yale an educational entity where classes and research will occur, and for the purpose of this commentary shall hereafter be referred to as a “Sharia School.”

Mr. Salovey’s announcement of Yale’s acceptance of these funds did not inform the public on several key facts relating to Abdallah Kamel. The first of Mr. Salovey’s omissions of fact regarding the “gift” of $10,000,000 was that these funds come directly from a person who has relationships with terrorists and terror financing, information that is publicly available to anyone.

Omission 1: Several articles have been written about the father of Abdallah (a.k.a. Abdullah) Saleh Kamel being the real donor of the funds. Saleh Abdallah (a.k.a. Abdullah) Kamel of the Dallah Albaraka Group was listed on the Golden Chain financiers of Al Qaeda. A lawsuit brought by the families of the victims of September 11 named those on the Golden Chain as defendants. Saleh Kamel was only released from the suit due to his living outside the personal jurisdiction of the federal court. Information was presented in the case that directly tied his company (Dallah Albaraka Group) to funding one of the terrorists on the planes prior to the attack.

Omission 2: Abdallah S. Kamel, as chief executive of the Dallah Albaraka Group, also bears responsibility for its financing of another federally identified terrorist group–Hamas. According to a report filed with the President of the United Nations Security Council in December 2002:

al Aqsa International Bank, was described as the “financial branch of Hamas” by American authorities. … The bank was established with $20 million in capital by several prominent financial groups or institutions, notably the Jordan Islamic Bank and the Saudi Dallah al Baraka. The Jordan Islamic Bank is the property of the Dallah al Baraka Group, led by Saleh Abdallah Kamel, shareholder of the same bank Usama bin Laden funded in Sudan via local trustees and companies.

These two omissions of fact enable Yale to project the appearance the institution is working legally with good people for the establishing of a Sharia School at Yale. However, it is difficult to hide relationships with those who finance groups responsible for the outright slaughter of thousands.

Yale took down its public relations page on the Abdallah S. Kamel Islamic Law Center when this article was first proposed to the Connecticut Law Tribune. That site was taken down after this writer was informed of the acceptance of this article. Interestingly, Yale had one more page not available to Google which states that the university has had a relationship with Abdallah S. Kamel for years, as they have funded lecture series on Islamic law at Yale.

Worse still, Yale officials accepted funds from Kamel having never questioned any of his banks’ interactions with terrorists that were documented by our Senate Banking Committee.

FBI: Attack in San Bernardino Now Being Treated as "Act of Terrorism"