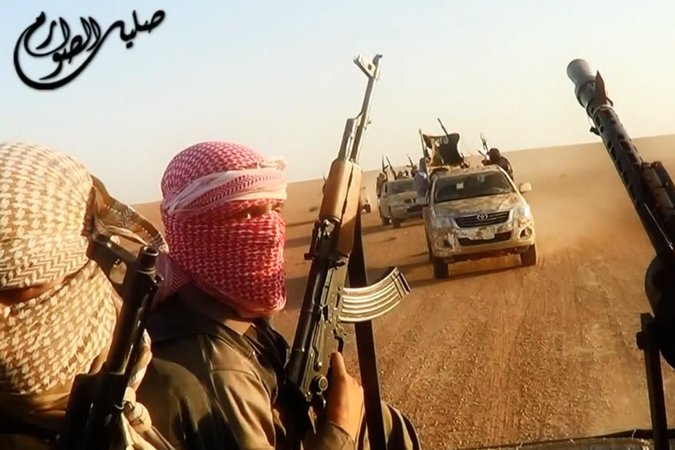 An image taken from a video uploaded on Sunday by the Islamic State of Iraq and Syria claiming to show fighters in Tikrit, Iraq. (Photo Credit: ISIS via Agence France-Presse — Getty Images)

The Islamic State of Iraq and Syria, or ISIS, a militant Sunni group inspired by Al Qaeda have now stormed into northern Iraq. The group has vowed to create a caliphate spanning the Sunni-dominated sections of neighboring countries, boasting control of large regions in Syria.

Najm is no stranger to U.S. military forces. He fought side-by-side with the former leader of Al Qaeda in Iraq, Jordanian-born Abu Musab al-Zarqawi, who was killed by U.S. troops back in 2006. But now, it looks as though the Obama administration has rendered those efforts in vain, as the fall of Baghdad grows more and more imminent. Last year PPD reported on the growing violence that dwarfed the levels seen during the Obama administration, as did others, but the president ignored the warnings.

Najm had been detained by U.S. forces and spent several years in prison during the president’s first term. However, he was set free two years ago by the Obama administration and has since prepared and commanded the operations that led to the group’s recent assault on northern and central Iraq.

The group has seized several large and strategic cities, including the country’s second-biggest, Mosul, and it controls a larger territory than many countries and rivals. If measuring territory, then the group has far surpassed Al Qaeda as the world’s most powerful and dangerous jihadist group.

The militants have forced their entry in to the Turkish Consulate in Mosul and are now holding 48 people captive, including diplomats, police, consulate employees and three children, according to an official in the office of Turkish Prime Minister Recep Tayyip Erdogan.

Mosul, the capital of Ninevah province, and the neighboring Sunni-dominated province of Anbar share a long and porous border with Syria, where the Islamic State is also active.

Mosul’s fall is a devastating defeat for embattled Prime Minister Nouri al-Maliki, who urged the Iraqi Parliament to vote on a measure declaring a state of emergency. His Shiite-dominated political coalition came to power as a result of the April 30 parliamentary elections, which were the first elections held since the U.S. military withdrawal in 2011. But he failed to gain a majority, leaving him little choice but to join with political enemies to build a governing coalition.

Prime Minister al-Maliki said a “conspiracy” — insinuating the opposing political forces — led to the conditions that were ripe for the militants to capture Mosul, and warned that members of the security forces who abandoned their posts rather than fighting the ISIS should be punished.

“We are working to solve the situation,” al-Maliki said. “We are regrouping the armed forces that are in charge of clearing Ninevah from those terrorists.”

The capture of Mosul and the fall of Tikrit add to an earlier capture of the city of Fallujah and parts of Ramadi, which is the capital of western Anbar province. This latest massive failure of foreign policy marks a complete waste of blood and treasure, reversing hard-fought gains against insurgents in the years following the 2003 invasion by U.S.-led forces.

Background on the Islamic State of Iraq and Syria, the Islamist group that appears to be in control of the second-largest city in Iraq.
Credit By Christian Roman on Publish Date June 10, 2014