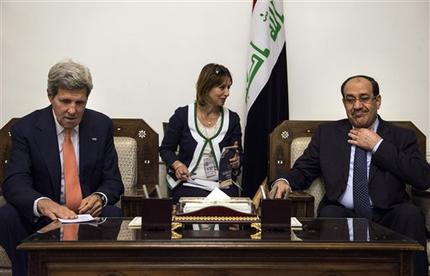 Secretary of State John Kerry said Monday that the leaders of Iraq’s various political factions assured him they would seat a new government next week, before a Sunni insurgency facilitates the end of a potential peace.

“This is a critical moment for Iraq’s future,” Kerry said at a press conference in Baghdad. “It is a moment of decision for Iraq’s leaders and it’s a moment of great urgency.”

Kerry said the U.S. pledged support for Iraq’s Security Force even as Sunnis remain frustrated by what has been an effort by Prime Minister Nouri al-Maliki to cut them out of power. They reportedly continue to enlist in the ISIS, an extremist group that has enjoyed a series of successes in neighboring Syria civil war prior to scoring gains in Iraq over the past two weeks.

However, despite the increasing rhetoric from Kerry and lawmakers on both sides of the aisle, al-Maliki gave no indication that he would consider stepping down. Still, the Obama administration says they will move forward with unspecified support for the Iraqi government, though a large military presence is unlikely.

“The support will be intense, sustained, and if Iraq’s leaders take the necessary steps to bring the country together, it will be effective,” Kerry said.

Last week, President Obama announced that he would send roughly 300 “military advisors,” which is code for Green Berets and other U.S. Special Forces soldiers, in a mission to assist and “advise” the Iraqi Security Force.

However, Kerry arrived in Baghdad just one day after the Sunni militants captured two key border posts, one along the frontier with Jordan and the other with Syria. Now, because they control the porous border with Syria, a free flow of weapons and hardened fighters from Syria are entering the country virtually unopposed. As far as Jordan, King Abdullah, an ally of the U.S., has been considerably concerned about the stability of his nation.

Meanwhile, these latest victories have vastly expanded territory now under the militants’ control in Iraq. In northern Iraq, they have all but total control of the region, despite the fact the Iraqi army are superior in numbers. According to the consensus in the intel community, the ISIS currently controls more than one-third of the territory in Iraq.

The control of the two border crossing points unequivocally brought the group closer to its goal, which is to establish an Islamic caliphate, a massive extremist-based state encompassing both Syria and Iraq.

Kerry conveyed to the prime minister and others that he and the U.S. believe only Iraqi leadership can save the government in Iraq, and they should start by granting more power to Iraq’s minorities.

“The very future of Iraq depends on choices that will be made in the next days and weeks, and the future of Iraq depends primarily on the ability of Iraq’s leaders to come together and take a stand united against ISIL (ISIS),” Kerry said, referring to the insurgency known as the Islamic State of Iraq and the Levant (Syria). “Not next week, not next month, but now.”

But ultimately, no country including the U.S., should be choosing leadership for Iraq. “That is up to the people of Iraq,” Kerry said.

Prime Minister al-Maliki is facing increasing pressure from within the U.S. and Iraq for his resignation. Sunnis say they do not believe he will give them a greater role or adequate representation in the government, and his past actions warrant little expectation for him to do so.

Still, Parliament Speaker Osama al-Nujaifi, for instance, one of Iraq’s top-ranking Sunnis, is prepared to work with the current leadership for the greater good of Iraq. He told Kerry that the ISIS pose “a threat to the entire world.” Al-Nujaifi, is from Mosul, which is Iraq’s second largest city that fell to the ISIS earlier this month by militants.

Of the insurgents, al-Nujaifi said “we have to confront it through direct military operations, political reforms so that we can inject a new hope into our own people so that they can support the political process and the unity of Iraq.”

Iraqi officials briefed on the meeting between Kerry and the Iraqi prime minister said al-Maliki urged the United States to target the militants’ positions in Iraq and neighboring Syria, citing training camps and convoys with airstrikes. The officials said Kerry responded by saying a great deal of care and caution must be taken before attacks are launched to avoid civilian casualties that could create the impression that Americans are attacking Sunnis.

The officials spoke on condition of anonymity because they were not authorized to speak to the media on the record.

President Barack Obama, in a round of television interviews that aired in the U.S., said al-Maliki and the Iraqi leadership face a test as to whether “they are able to set aside their suspicions, their sectarian preferences for the good of the whole.”

“And we don’t know,” Obama said. “The one thing I do know is that if they fail to do that then no amount of military action by the United States can hold that country together.”

While that is certainly debatable, the effectiveness of the ISIS versus the larger Iraqi force, isn’t. Sunday’s border crossing captures near Jordan and Syria came after the fall of the towns of Qaim, Rawah, Anah and Rutba. All of them are in the Sunni-dominated Anbar province, and many experts say they could not have been captured without local help. The region is also where militants have held up since January, when they took control of the city of Fallujah and other areas of the provincial capital, Ramadi.

On Monday, Islamic militants ambushed a police convoy that was transferring prisoners located approximately 85 miles (140 kilometers) south of Baghdad, killing nine policemen and 13 prisoners. The officials said some of the prisoners were convicted of terrorism-related charges, and were being relocated to a high-security prison in the southern city of Nasiriyah, which is 200 miles (320 kilometers) southwest of Baghdad.