HomeNewsWorldHundreds Of Ukrainian Babies Born With HIV Due To Conflict 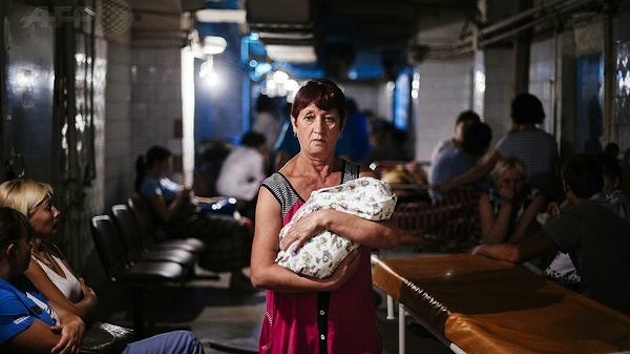 According to a report from Sky News, the conflict in Ukraine has resulted in hundreds of babies being born with HIV due to a shortage of vital drugs. International relief organizations like UNICEF say many pregnant women infected with HIV are passing the virus onto their unborn children, and the number of infants born with HIV contracted in the womb is beginning to rise for the first time in more than a decade.

The violence resulting from Russian-backed separatists attempting to topple the pro-West Ukrainian government is “breaking down” Ukraine’s AIDS program. Currently, no measures are being taken to fight the 25-year epidemic, which was improving prior to the violence. The fighting, which is hardest and most bloody in the eastern part of the country, has led to political turmoil that has limited the supply of anti-retroviral drugs needed to prevent the spread of HIV.

According to estimates from the United Nations, fighting in eastern Ukraine has killed at least 5,300, and displaced nearly a million people. UNICEF officials say the number of babies born with HIV is increasing for the first time since 2002.

“There is potential for a real disaster,” Giovanna Barberis, UNICEF’s representative in Ukraine told Sky News. “Because of the crisis in Ukraine the system is breaking down and there is a shortage of antiretroviral drugs. They cost money, they are expensive and whilst the international community is there to support, it is probably not enough.”

Despite public diplomatic relations and subsequent promises, western allies have been slow to provide financial and military aide to the Ukrainian government, which took power after the now-ostracized former Ukraine president Viktor Yanukovych was driven from Kiev by months-long protests. Top Senate Republican John McCain, R-Ariz., who has long argued for greater U.S. assistance to Ukraine, said the situation will only get worse for the people of Ukraine, as well as for U.S. security interests in the region.

“Putin does want a diplomatic solution. He wants to dominate Ukraine, as well as Russia’s other neighbors,” McCain said in a statement. “The Ukrainian people are not asking any of us to fight their war for them. They are willing to defend their country. They have been doing so for an entire year. If we help Ukrainians increase the military cost to the Russian forces that have invaded their country, how long can Putin sustain a war that he tells his people is not happening? That is why we must provide defensive arms to Ukraine.”

Ukraine was forced to sign a $17 billion bailout with the International Monetary Fund, but still needs far more to get a hold on the financial disarray that has plagued the country and paralyzed government services, including public health.

“We’re very well prepared to face the challenges and we are ready to send that message to our international donors,” said Ukraine’s new health minister Alexander Kvitashvili, who argues the country has “a grip” on the HIV epidemic.

However, international health organization officials fighting the battle against HIV, don’t agree. Dr. Checheneva, a top HIV specialist and pediatrician in the thick of the epidemic, says she is concerned about the country’s ability to control the virus.

“At the moment I feel I am not in Ukraine, that I am in Africa or somewhere,” Dr. Vera Checheneva told reporters. “This is very expensive treatment and our government prefers to save money by buying cheaper drugs, but they’re not very good quality. These new figures we have – they’re just the tip of the iceberg. I don’t know what more I can do.”