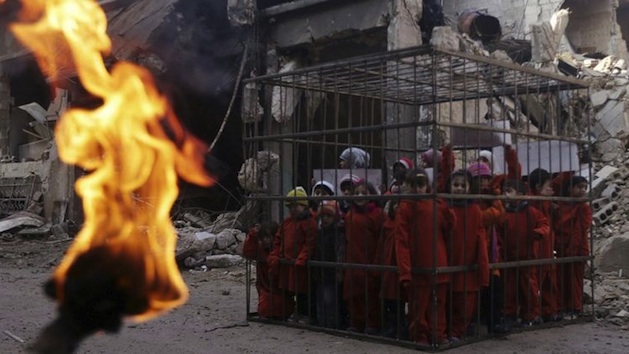 Captive children held by ISIS in a cage while a burning torch is presented.

ISIS militants have burned 45 people to death in the western Iraqi town of al-Baghdadi on Tuesday, just five miles (8Km) from Ain al-Asad air base, where roughly 320 US Marines are training members of the Iraqi army’s 7th Division.

The identities of the Iraqi victims are not clear, but the local police chief told the BBC at least some are believed to be members of the security forces that have been clashing with ISIS for control of the town. ISIS fighters captured most of the town last week, just after administration officials told PPD they believe they would win the battle for al-Baghdadi within two weeks.

Apparently, that was not the case.

Col. Qasim Obeidi, who is pleading for help from the Iraqi government and international community, said a compound that houses families of security personnel and officials is now under siege.

The tragic development came just as Vice President Joe Biden kicked off the White House summit on “violent extremism,” which refuses to name Islamists as the source of the violence. The revelations also came just days after ISIS released a video purportedly showing the beheadings of 21 Egyptian Coptic Christians along a beach in Libya, which prompted a palpal outcry of commendation from Pope Francis, who called the killings “barbaric.”

On Friday, a media group linked to ISIS released a four-minute video titled “Peshmerga Captives in Kirkuk Province,” which purportedly showed Kurdish prisoners — imprisoned in iron cages — being driven around on trucks in Iraq, according to the Middle East Media Research Institute.

The imagery of the prisoner convoy in orange uniforms was similar to the scenes of an execution of a Jordanian pilot. In a video released by ISIS two weeks ago, Lt. Muath al-Kaseasbeh was shown being burned alive in a cage.

Al-Baghdadi, which is about 50 miles northwest of Ramadi in Anbar province, is located about five miles from Ain al-Asad air base, where 400 U.S. military personnel are training Iraqi soldiers and Sunni tribesmen to take on ISIS. The base was raided last week by a small band of fighters, in what some experts believe may have been a probe in preparation for a full-scale attack.

The base has been the target of sporadic mortar fire in past weeks, and the jihadist army has been moving forces from its strongholds in Syria to Anbar Province, possibly setting the stage for a major clash with forces on the base that is now the sole bulwark between ISIS and Baghdad.

There are currently nearly 2,600 U.S. forces in Iraq, including about 450 who are training Iraqi troops at three bases across the country, including al-Asad. Forces from other coalition countries conduct the training at the fourth site, in the northern city of Irbil.

In a separate development on Tuesday, the influential Shia cleric Moqtada Sadr announced he was withdrawing his forces from an umbrella group of Shia militia fighting IS alongside the Iraqi army.

He cited what he called the bad behaviour of other militia within the Popular Mobilisation Forces, whom he accused of “wreaking havoc through murdering, kidnapping and violating sanctuaries”.