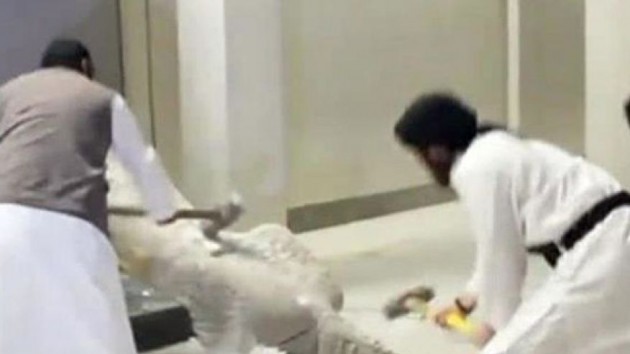 In the image above, Islamic militants from the terror army ISIS destroy ancient relics taken from the Nimrud.

ISIS is at it again. Islamic State terror militants reportedly are demolishing yet another ancient archaeological site in Iraq on Saturday. The destruction of the remnants of ancient Hatra are the latest in a series of efforts to erase symbols that ISIS claims promote idolatry, which they say the Prophet has ordered them “to get rid of.”

Saeed Mamuzini, a Kurdish official from Mosul, told the AP that ISIS militants started carrying away artifacts from Hatra as early as Thursday. On Saturday, they began to destroy the 2,000-year-old city. Mamuzini and other witnesses reported seeing bulldozers demolish the site after hearing two large explosions.

Ancient Hatra, located 68 miles southwest of the city of Mosul, was a large fortified city under the influence of the Parthian Empire and capital of the first Arab Kingdom. It withstood invasions by the Romans in A.D. 116 and 198 due largely to its high, thick walls reinforced by towers.

The remnants of the city, particularly the temples resembling Hellenistic and Roman architecture mixed with Eastern decorative features, were a symbol of the greatness of its civilization.

On Friday, the group looted artifacts from Nimrud, a 3,000-year-old city in Iraq, and bulldozed it in a move United Nations Secretary General Ban Ki-Moon declared “a war crime.”

Nimrud, the second capital of an ancient Assyrian kingdom that began in about 900 B.C., was destroyed in 612 B.C. and is located on the Tigris River just south of Iraq’s second largest city, Mosul. The city and the region were captured by the Islamic State terror army in June. The country’s Ministry of Tourism and Antiquities said in a statement that the terror group continues to “defy the will of the world and the feelings of humanity.”

Jack Green, chief curator of the Oriental Institute Museum at the University of Chicago and expert on Iraqi art, said Thursday that ISIS aims to destroy objects they view as idols representing religions and cultures that don’t reflect their radical views.

“It’s the deliberate destruction of a heritage and its images, intended to erase history and the identity of the people of Iraq, whether in the past or the present,” Green said. “And it has a major impact on the heritage of the region.”

A video released last week showed them smashing artifacts in the Mosul museum, many of which identified as antiquities from the 7th century BC, with sledgehammers and drills. The men could be heard saying they were symbols of idolatry.

“The Prophet ordered us to get rid of statues and relics, and his companions did the same when they conquered countries after him,” an unidentified man said in the video.

In January, the group burned hundreds of books from the Mosul library and Mosul University, including many rare manuscripts.

the director of UNESCO’s Iraq office, first tweeted that the Nimrud attack was an “appalling attack on Iraq’s heritage,” before adding the acts constitute war crimes. Now, he weighed in on the destruction of Hatra, which is a UNESCO world heritage site.

The Tourism and Antiquities Ministry is calling on the U.N. Security Council to meet and discuss how to best take action to protect cultural heritage in Iraq. Iraq’s national museum in Baghdad just opened its doors to the public last week for the first time in 12 years. Prime Minister Haider al-Abadi said the decision was made to defy efforts “to destroy the heritage of mankind and Iraq’s civilization.”