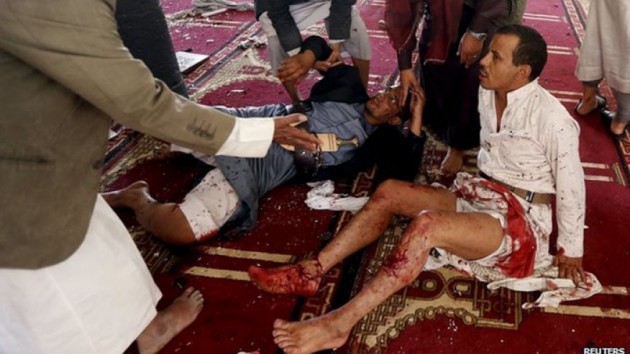 At least 46 were killed and hundreds injured in the attacks on two mosques. (Photo: Reuters)

BREAKING: At least 130 people were killed in suicide bombings at two mosques during midday prayers Friday in the Yemeni capital of Sanaa amid fighting between Islam’s two major sects. Officials are claiming that at least 300 were injured in the attack.

According to witnesses, at least four suicide bombers blew themselves up in the mosques, which are used by Shiite Muslim Houthis, the Iranian-backed group that seized control of the government in late January. The attacks reportedly also left hundreds injured, and apparently were conducted in conjunction with an assault on the presidential palace.

Worshippers were attending noon prayers at the Badr and al-Hashoosh mosques in Sanaa when the attacks were perpetrated,with one witness telling The Associated Press he was in the al-Hashoosh mosque, located in Sanaa’s northern district, when he was thrown two meters away by the blast.

“The heads, legs and arms of the dead people were scattered on the floor of the mosque,” Mohammed al-Ansi said, adding, “blood is running like a river.”

Al-Ansi said that many of those who didn’t die in the explosion were seriously injured by shattered glass falling from the mosque’s windows. He said he was running for the exit with other survivors when he hearded one man screaming, “come back, save the injured!”

While no group immediately claimed responsibility for the attacks, officials suspect al Qaeda in the Arabian Peninsula, or AQAP, as the attacks bore hallmarks of prior al Qaeda bombings. However, ISIS-affiliates on social media claimed that the group carried out the bombing.

If true, it would be its first major attack in Yemen by the Islamic State, and potentially indicate the group working with AQAP as they have done with Boko Haram in recent weeks.

The U.S. was forced to evacuate its embassy soon after, carelessly leaving a secure classified connection up and running. As PPD previously reported, the Obama administration believed it had hatched a deal with Iran to leave the embassy open in order to conduct counter-terror operations against AQAP, but they got swindled.

The bombings came a day after deadly clashes in the southern city of Aden, between forces loyal to President Abdrabbuh Mansour Hadi and the Houthi supporters of his predecessor, Ali Abdullah Saleh, who was ousted in 2011 after mass protects in the so-called Arab Spring. Now, he is allied with the Shiite Houthis, the very group he had previously fought wars against while in power.

Warplanes struck the presidential palace in Aden, where Hadi has been holed up since fleeing the capital of Sanaa February. Hadi, who aides confirmed had been evacuated to a “safe place” after the air strikes, called the Aden attack part of a “failed military coup against constitutional legitimacy.”

The Houthis now control at least nine of Yemen’s 21 provinces.

The attack is the latest example of instability in the region since the kick off of the Arab Spring, a movement that began in Tunisia in 2010 and swept throughout the Muslim world. Initially, those rebelling promised to bring democracy to nations under Islamist dictatorships, which was supported by the Obama administration. However, it has proven a gross and dangerous failure, with violence now plaguing Tunisia, where two gunmen killed 23 people at a museum Wednesday.

The Islamic State claimed credit for the attack.