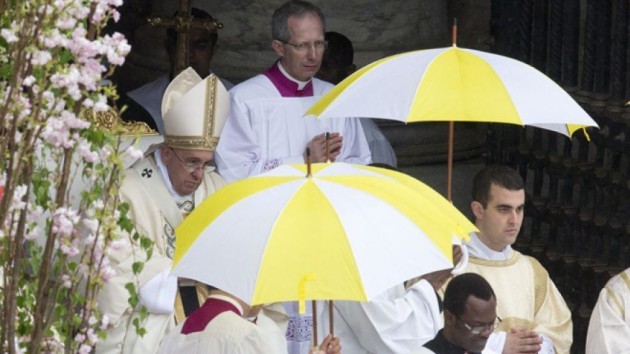 April 5, 2015: Pope Francis, left, is framed by umbrellas as he celebrates the Easter Mass in St. Peter’s Square at the the Vatican. (Photo: AP)

VATICAN CITY – Pope Francis’ “Urbi et Orbi” Easter message on Sunday praised the Lord, but also the framework nuclear agreement with Iran as an opportunity to make the world safer. Speaking in Vatican City, the pope also expressed his deep concern for the recent bloodshed in Libya, Yemen, Syria, Iraq, and in Africa.

The Urbi et Orbi Easter message, which was delivered from the central balcony of St. Peter’s square to tens of thousands of people huddled under umbrellas, is how the papal sees the state of the world’s affairs.

Easter day is “so beautiful, and so ugly because of the rain,” Francis said after Mass. He also made his first public comments since the recent framework for an agreement was reached in Lausanne, Switzerland, regarding Iran’s nuclear weapons program.

“In hope we entrust to the merciful Lord the framework recently agreed to in Lausanne, that it may be a definitive step toward a more secure and fraternal world,” Pope Francis said. “And we ask for peace for this world subjected to arms dealers, who earn their living with the blood of men and women.”

He also denounced “absurd bloodshed and all barbarous acts of violence” in Libya, hoping “a common desire for peace” would prevail in Yemen, which has been the scene of a recent Iran-backed coup. Saudi Arabia recently began a bombing campaign to halt the advance of the Houthi Shiite rebels and reinstall the ousted president.

Francis prayed that the `’roar of arms may cease” in Syria and Iraq, and that peace would come in Africa for Nigeria, South Sudan, Sudan and Congo.

He recalled the young people, many of them targeted because they were Christians, killed last week in a Kenyan university, and lamented kidnappings, by Islamic extremists, that have plagued parts of Africa, including Nigeria.

On Good Friday, Francis criticized the international community for what he called the complicit silence over the killing of Christians. On Easter he prayed that God would alleviate “the suffering of so many of our brothers persecuted because of his name.”

The following is the Vatican’s official English-language translation of Pope Francis “Urbi et Orbi” Easter message, which he delivered Sunday in Italian from the central balcony of St. Peter’s Basilica:

Jesus Christ is risen! Love has triumphed over hatred, life has conquered death, light has dispelled the darkness!

Out of love for us, Jesus Christ stripped himself of his divine glory, emptied himself, took on the form of a slave and humbled himself even to death, death on a cross. For this reason God exalted him and made him Lord of the universe. Jesus is Lord! By his death and resurrection, Jesus shows everyone the way to life and happiness: this way is humility, which involves humiliation. This is the path which leads to glory. Only those who humble themselves can go towards the “things that are above”, towards God (cf. Col 3:1-4). The proud look “down from above”; the humble look “up from below”.

On Easter morning, alerted by the women, Peter and John ran to the tomb. They found it open and empty. Then they drew near and “bent down” in order to enter it. To enter into the mystery, we need to “bend down”, to abase ourselves. Only those who abase themselves understand the glorification of Jesus and are able to follow him on his way.

The world proposes that we put ourselves forward at all costs, that we compete, that we prevail. But Christians, by the grace of Christ, dead and risen, are the seeds of another humanity, in which we seek to live in service to one another, not to be arrogant, but rather respectful and ready to help.

This is not weakness, but true strength! Those who bear within them God’s power, his love and his justice, do not need to employ violence; they speak and act with the power of truth, beauty and love.

From the risen Lord we ask the grace not to succumb to the pride which fuels violence and war, but to have the humble courage of pardon and peace. We ask Jesus, the Victor over death, to lighten the sufferings of our many brothers and sisters who are persecuted for his name, and of all those who suffer injustice as a result of ongoing conflicts and violence.

We ask for peace, above all, for Syria and Iraq, that the roar of arms may cease and that peaceful relations may be restored among the various groups which make up those beloved countries. May the international community not stand by before the immense humanitarian tragedy unfolding in these countries and the drama of the numerous refugees.

We pray for peace for all the peoples of the Holy Land. May the culture of encounter grow between Israelis and Palestinians and the peace process be resumed, in order to end years of suffering and division.

We implore peace for Libya, that the present absurd bloodshed and all barbarous acts of violence may cease, and that all concerned for the future of the country may work to favor reconciliation and to build a fraternal society respectful of the dignity of the person. For Yemen too we express our hope for the growth of a common desire for peace, for the good of the entire people.

At the same time, in hope we entrust to the merciful Lord the framework recently agreed to in Lausanne, that it may be a definitive step toward a more secure and fraternal world.

We ask the risen Lord for the gift of peace for Nigeria, South Sudan and for the various areas of Sudan and the Democratic Republic of the Congo. May constant prayer rise up from all people of goodwill for those who lost their lives – I think in particular of the young people who were killed last Thursday at Garissa University College in Kenya -, for all who have been kidnapped, and for those forced to abandon their homes and their dear ones.

May the Lord’s resurrection bring light to beloved Ukraine, especially to those who have endured the violence of the conflict of recent months. May the country rediscover peace and hope thanks to the commitment of all interested parties.

We ask for peace and freedom for the many men and women subject to old and new forms of enslavement on the part of criminal individuals and groups. Peace and liberty for the victims of drug dealers, who are often allied with the powers who ought to defend peace and harmony in the human family. And we ask peace for this world subjected to arms dealers.

May the marginalized, the imprisoned, the poor and the migrants who are so often rejected, maltreated and discarded, the sick and the suffering, children, especially those who are victims of violence; all who today are in mourning, and all men and women of goodwill, hear the consoling voice of the Lord Jesus: “Peace to you!” (Lk 24:36). “Fear not, for I am risen and I shall always be with you” (cf. Roman Missal, Entrance Antiphon for Easter Day).

North Korea Declares No-Sail Zone Ahead Of Another Missile Launch