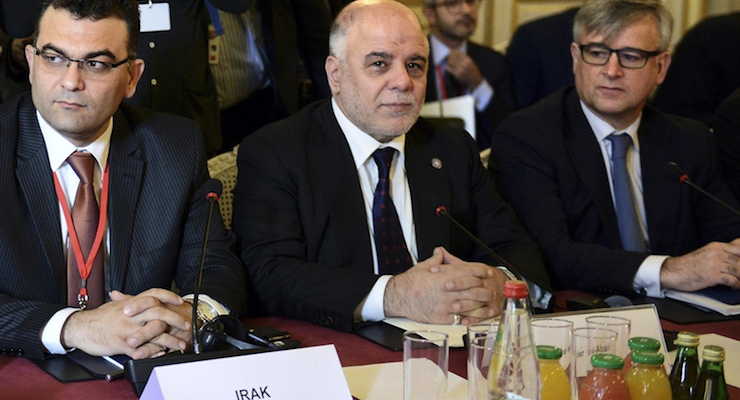 Iraqi Prime Minister Haider al-Abadi on Tuesday blamed the U.S.-led coalition that is training his security forces for the spread of the Islamic State in his country. Prime Minister al-Abadi said ISIS “is a failure on the part of the world” to offer an alternative to militant Islam, adding the international community has “a lot of political work” in their own countries.

“Why are there are so many terrorists from Saudi Arabia, the Gulf, Egypt [and] European countries,” al-Abadi demanded to know. “If it is due to the political situation in Iraq, why are Americans, French and German [fighters] in Iraq?”

His comments were made during a gathering in Paris by senior leaders of the U.S.-led coalition fighting the Islamic State (ISIS), which despite allegedly successful airstrikes, has continued to make gains in Iraq and Syria.

“This is a failure on the part of the world,” Abadi told reporters ahead of the meeting. “There is a lot of talk of support for Iraq. There is very little on the ground.”

The anti-Islamic State conference is being held just weeks after Ramadi, the capital of Anbar province, fell to ISIS militants. The humiliating defeat occurred despite the Iraqi army — including Baghdad’s U.S. special operations-trained “Golden Division” — outnumbering ISIS militants by at least 5 to 1 (some estimate 10 to 1).

Abadi said the campaign efforts are “too little,” and called on the U.S. and allies to increase their air and weapons assistance, and stop holding up arms shipments.

But, even though there is no shortage of criticism of the administration’s actions to combat the Islamic State, military experts and spokesman say the issue is a bit more complicated than al-Abadi is portraying.

“The dirty little secret is that there is no more Iraq,” says retired Lt. Colonel Tony Schaffer. He also noted that the Anbar Awakening that helped turn the tide and win the Iraq War is not possible because, in addition to the pleas by Sunni tribesman falling on deaf ears at the White House, Prime Minister al-Abadi and the Shiite majority continue to create disaffected Sunnis in Iraq.

Still, Schaffer has been extremely critical of the Obama administration’s strategy — or, lack thereof — to defeat the Islamic State.

By some estimates, including one from an Air Force pilot who stoke to PPD last week, roughly 75 percent of all bombing missions in Iraq and Syria return with their payloads. Pilots blame a politically correct bureaucracy taking their marching orders from the Obama administration, which compartmentalizes each and every engagement decision.

“They say we will not indiscriminately attack targets and risk alienating Iraqi civilians, yet I literally watch militants execute those citizens because I am not permitted to engage targets,” he said. “We are in a catch 22, a morally reprehensible catch 22.”

Similarly, a Navy F-18 pilot who has flown missions against ISIS also voiced his frustration to Fox News recently.

“There were times I had groups of ISIS fighters in my sights,” he said. “But I couldn’t get clearance to engage.”

However, officials at the Pentagon defended the strategy when asked to respond to the reports by PPD.

“Our position is that the strike process is designed to do exactly what it is supposed to do,” Air Force spokesman Capt. Andrew Caulk responded in an email. “We target Daesh (ISIS) when we find them and in a way that protects civilians. We will not stoop to the level of our enemy and put civilians more in harm’s way than absolutely necessary.”

The growing chorus of voices criticizing the limited role of the U.S. in Iraq and the Middle East, in general, includes regional allies.

Saudi Arabia, Turkey and Qatar — all of which are allied with the United States against the ISIS and Shiite Syrian President Bashar al-Assad — have pushed the administration for a more active role in the fight. In response, officials note that the United States has shipped 2,000 anti-tank rockets to the Iraqi military in recent weeks, trained 7,000 Iraqi soldiers and is currently training another 4,000.

Ultimately, White House Press Secretary Josh Earnest let the cat out of the bag while answering questions about the fall of Ramadi, which follows the fall of other major cities in Iraq, i.e. Mosul and Tikrit (the birthplace of Saddam Hussein and famed muslim military commander Saladin).

“The United States is not going to be responsible for securing the security situation inside of Iraq,” Earnest said. “Our strategy is to support the Iraqi security forces in doing what we will not do for them. The United States is prepared to train them, to equip them, and to back them on the battlefield with coalition military air power as they take the fight to ISIL in their own country.”

UN Envoy: We Should Put Israel on Kid-Killer List... Next to ISIS