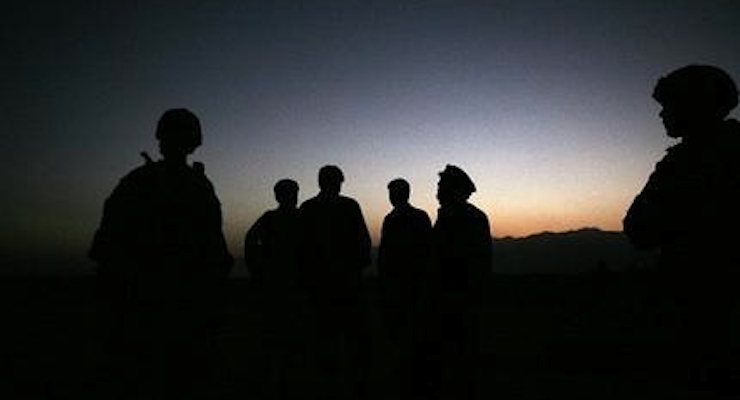 FILE – In this Sunday, Oct. 18, 2009 file photo, U.S. Army soldiers stand with Afghan policemen before a joint patrol of Qalanderkhail, outside of Bagram Air Field in Afghanistan. (Photo: AP/Maya Alleruzzo)

KABUL, Afghanistan — Six American soldiers were killed and three NATO troops were injured in a suicide attack near the U.S.-run Bagram Airfield in Afghanistan on Monday, NATO officials said. Mohammad Asim Asim, governor of Parwan province said an attacker on a motorcycle rammed a group of eight troops as they patrolled a village near Bagram Airfield, 45 kilometers (28 miles) north of Kabul.

The Taliban claimed responsibility for the suicide bombing, which was the largest attack on foreign troops in Afghanistan since August. However, the presence of the Islamic State in Afghanistan has grown and obfuscated the opposition to U.S.-backed forces in the government.

U.S. Army Brig. Gen William Shoffner, head of public affairs at NATO’s Resolute Support base in the capital of Kabul. said the deadly attack occurred at roughly 1.30 p.m. local time in the vicinity of Bagram, which is still the largest U.S. military facility in Afghanistan and one of the first locations taken at the onset of the invasion.

The suicide bombing was the first major attack on a NATO military convoy since August 22, when three American contractors with the RS base were killed in a similiar suicide bombing on their convoy in Kabul. On August 7 and 8, three insurgent attacks in Kabul took place within 24 hours and left 35 people dead. One of the attacks–on a U.S. special operations forces base outside Kabul–left one U.S soldier and eight Afghan civilian contractors dead.

As PPD reported in May, the number of American soldiers killed in Afghanistan under President Barack Obama has now far surpassed the number killed under President George W. Bush, with ISIS essentially swallowing up Taliban forces in Kunar, Khorasan and Helmond provinces. Defense Ministry spokesman Dawlat Waziri said among the insurgent forces fighting in Helmand, which is an opium haven for Islamists, “three out of 10 are foreign fighters.”

“The presence of the foreigners in this imposed war complicates the sitaution in Helmand,” he said.

Meanwhile, Helmand’s deputy governor Mohammad Jan Rasulyar said emboldened Islamists took control of Sangin district and, on Sunday, he actually took took to his Facebook page to warn President Ashraf Ghani that the entire province was in danger of falling to the insurgents. The head of Helmand’s provincial council, Muhammad Kareem Atal, offered alarming estimates regarding the amount of territory has been lost.

“Around 65 percent of Helmand is now under Taliban control,” Atal said. “In every district either we are stepping back or we are handing territory over to Taliban, but still, until now, no serious action has been taken.”

While President Obama has kept roughly 9,800 troops in the country, the Pentagon released a report last week stating the security situation in Afghanistan continues to deteriorate in the face of a “resilient Taliban-led insurgency remains an enduring threat to U.S., coalition, and Afghan forces, as well as to the Afghan people.”