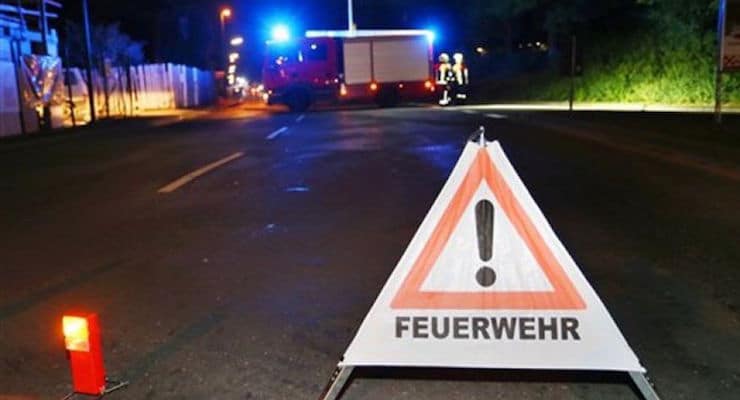 July 18, 2016: A firetruck blocks a road in Wuerzburg, southern Germany, after a man attacked people on a train. (Karl-Josef Hildenbrand/dpa via AP)

A teenage Afghan refugee injured multiple people when he went on a slashing spree with an axe and knife on a train in Germany Monday. He was shot and killed by police after three of the victims suffered serious injuries and one was slightly injured.

Another 14 people were being treated for shock. The train was en route from the Bavarian town of Treuchtlingen to Wuerzburg, which is located roughly 60 miles northwest of Nuremberg.

State Interior Minister Joachim Herrmann, Bavaria’s top security official, told Germany’s ARD television that the attacker had been identified as a 17-year-old Afghan refugee. Minister Herrmann said the suspect came to Germany under another controversial refugee resettlement program as an unaccompanied minor and lived in the Wuerzburg area. Initially, he stayed at a refugee facility in the town of Ochsenfurt and more recently with a foster family.

Witnesses say they had heard the suspect shout “Allahu Akbar” (“God Is Great” in Arabic) during the apparent terrorist attack, but Minister Herrmann said authorities were still investigating the motive and looking into reports that the suspect yelled “an exclamation” during the slashing spree.

Last year alone, Germany registered more than 1 million so-called refugees into the country, including more than 150,000 Afghans. However, it was not immediately clear whether the suspect was among them or someone who had been in the country for a longer time.

German Chancellor Angela Merkel has doubled-down on taking in Muslim refugees even as she faces rising opposition within her own political coalition. Bavaria’s Christian Social Union (CSU), sister party of Merkel’s CDU, is in full-blown rebellion. But that isn’t stopping the pro-migrant crowd, who have made a concerted effort to completely overlook the burden to the generous welfare states in the EU and public outcry.

According to a recent report, German authorities reportedly believe that more than 1,200 women were sexually assaulted across the country on New Year’s Eve and that more than 2,000 men were allegedly involved. The German newspaper Sueddeutsche Zeitung and other German broadcasters published a leaked police document last week that revealed details surrounding the rise of mass sex crimes by Muslim migrant refugees, according to The Washington Post.

Authorities believe that at least 600 of the sex assaults occurred in Cologne and 400 occurred in Hamburg. An official told the German paper that the mass sex crimes were a direct result of the European Union led by Germany taking large numbers of Muslim refugees.

“There is a connection between the emergence of this phenomenon and the rapid migration in 2015,” Holger Münch, president of the German Federal Crime Police Office, said, adding that he doesn’t think most of the suspected attackers will ever be convicted.

“We have to presume that many of those crimes will never be fully investigated,” Münch added.

Pakistani Brother of Honor Killing Victim Qandeel Baloch: "I'm Proud of What I Did"