HomeNewsWorldThe Georgia Imperative for the West

The Georgia Imperative for the West 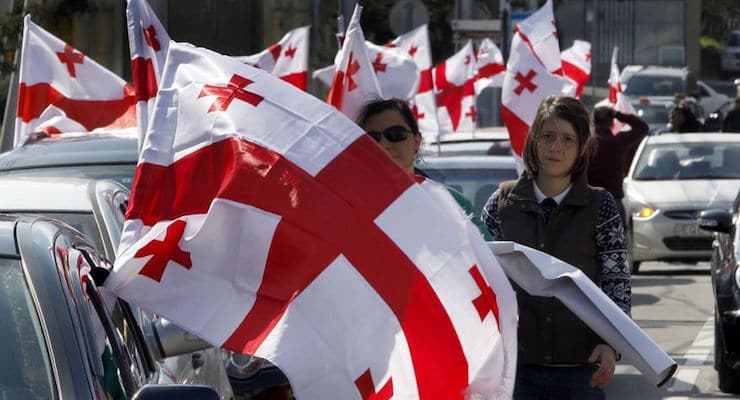 Supporters of the main opposition party wave Georgian national flags during a protest against buying gas from state-controlled Gazprom, in Tbilisi, Georgia, Sunday, March 6, 2016. Thousands of Georgians formed a human chain stretching for about 7 kilometers (4 miles) through the capital on Sunday to protest negotiations between their government and the Russian natural gas monopoly, Gazprom. (AP Photo/Shakh Aivazov)

During the eight years of the Obama administration, the transformation of former Ottoman territory has been sweeping and complete. The new Russia/Iran/Shia axis now controls a wide swath of the Middle East from the Mediterranean to the Iranian-Afghan border.

One would be hard pressed to perceive, from today’s facts on the ground, that the United States won tactical victories in Afghanistan and Iraq before President Barack Obama was sworn in. Even the capital city of Suleiman the Magnificent himself, Istanbul, has changed from the guardian of NATO’s southern flank and a secular democracy on the way towards EU integration, to a Islamic dictatorship-in-the making, eliminating a free press, and crushing the political opposition.

Whether this historic transformation of such an important region of the world was Obama’s grand design or simply the result of his feckless policies simply does not matter—the result and has enormous consequences for the national security of the United States.

America has gone absent without leave in its historical support for freedom and democracy around the world under the Obama administration. The murderous “Islamic State” and the Shia Islamic Republic of Iran are causing mayhem and instability where the world still gets forty percent of its oil. The totalitarian wave threatens to engulf Europe and the United States in a further existential crisis.

However, there is one shining city on a hill in the middle of this darkening cloud of violent, extremist clerical control. The tiny country of Georgia is nestled in the Caucasus between Putin’s Chechen strongman Ramzan Kadyrov on one side, the Russian satellite Armenia on the other side, and Putin’s new bromance partner Erdogan on the third. I can’t think of a more strategic piece of land abutting the Islamic world for the West and the NATO alliance. The port access to the Black Sea at Batumi alone is worth its weight in gold.

The good news for the West is that Georgia has been and still is a beacon of democracy, the rule of law, and the fight against corruption in a sea of darkness from despots in the region, from the Iranian mullahs to Kadyrov’s Islamic brownshirts.

In power since 2013, the Georgia Dream Party, under the leadership of Prime Minister Giorgi Kvirikashvili, and President Giorgi Margvelashvili, has not had it easy. Russian pressure since the Georgian War in 2008 continues to be strong, with Moscow even recently moving the border fence posts at the Russian-occupied region of South Ossetia to bite off more critical infrastructure inside Georgia.

To the south west, the failed coup in Turkey has injected huge instability in the region. To the south east, Iran is buying sophisticated weapons by the shipload with secret Obama cash flown into Tehran in the middle of the night.

In spite of all these pressures, Georgia Dream continues to push toward integration with the West and the possibility of eventual NATO membership. The elections in 2012, although not perfect, were a model of transparency for the region. Georgia continues to reduce red tape and corruption, in many cases fostering policies that would make a card-carrying union bureaucrat in the United States shake with fear, like the ability to get a passport in 15 minutes. Georgia is also a model for a market economy in a part of the world known for its rapacious Kafkaesque bureaucracy.

The West would be foolish not to support such a brave, resourceful country on its path to a free society and prosperity. Georgia’s geopolitical importance notwithstanding, its ability to continue to reduce corruption and improve the climate for business is remarkable. Much of the world is on a march to Marxist socialism, the lessons of the twentieth century conveniently forgotten. They will for sure have to be relearned at some point, probably the hard way.

Political Islam is rampant in the region. Georgia is a predominantly Christian country and can be an important bulwark against the Islamic jihadi threats emanating from its neighborhood.
In short, the West needs to pay more attention to Georgia. High-level state visits can raise the visibility of Europe and America’s commitment to Georgia. Support for its freedom and democratic foundation can go a long way to ensuring Georgia remains so. Continued integration with NATO, even if full membership is a long way off, can provide assurance to the Georgian people and their leaders that freedom and a market economy are worth the pressures they have to endure from less friendly nations around them.

The West can help ensure that the upcoming election in November is free from violence and political interference. Another successful, democratic, transparent election would give the Eurasia and the Middle East a much needed example of how things could be if they throw off the yoke of totalitarian control.

Ignoring a democracy in a vital region has consequences. Already, the other democracy in the Middle East, Israel, has made multiple overtures to the Kremlin due to the U.S. neglect and hostility; it has to play in the sandbox it is dealt, as Obama puts Iran on the path to nuclear weapons. Georgia needs to remain firmly in the orbit of the EU, NATO and the United States. The next American president should make it abundantly clear to the world that it is.

U.S.-Russian Brokered Ceasefire in Syria Unraveled Before it Ended