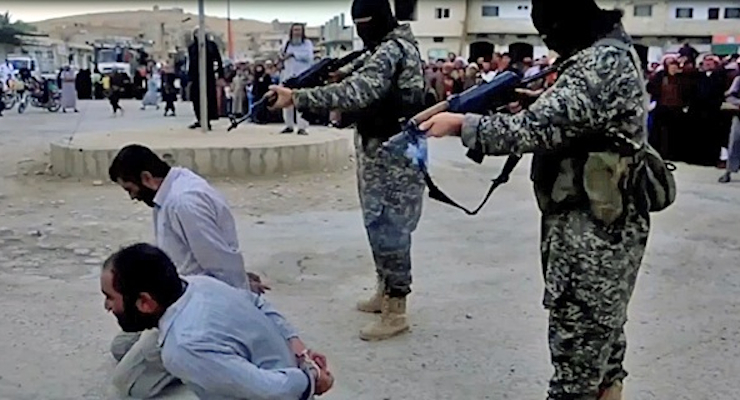 The Islamic State (ISIS) on Monday claimed responsibility for the New Year’s attack at a popular Istanbul nightclub that killed 39 people and wounded roughly 70 others. The Aamaq News Agency said the attack was carried out by a “heroic soldier of the caliphate who attacked the most famous nightclub where Christians were celebrating their pagan feast.”

“We let infidel Turkey know that the blood of Muslims that is being shed by its airstrikes and artillery shelling will turn into fire on its territories,” the group said in a statement, describing Turkey as “the servant of the cross.”

The statement also insinuated the attack, which occurred at roughly 1:45 am., was a retaliation for the Turkish military offensives against the Islamic State in Syria and Iraq. But that didn’t deter Turkey from joining Russia in hitting more than 100 Islamic State targets in Syria on Monday in response to the attack.

A manhunt is still underway for the assailant, who was wearing a Santa Claus hat as he opened fire in the crowded Reina nightclub located in the Ortakoy district. The upscale nightclub is frequented by local celebrities, including singers, actors and sports athletes.

While the Islamic terrorist killed a policeman and another man outside the nightclub before entering, the attack appears to have targeted foreigners. Of the 600 people celebrating inside, nearly two-thirds of the dead were foreigners, though many of them were from the Middle East.

Turkey’s Anadolu Agency reported that Justice Ministry officials identified 38 of the 39 dead, and 11 of them were Turkish nationals. One of the deceased victims was a Turkish-Belgian dual citizen. The report identified 7 other victims as being from Saudi Arabia; three each were from Lebanon and Iraq; two each were from Tunisia, India, Morocco and Jordan. Kuwait, Canada, Israel, Syria and Russia each lost one citizen.

The latest terror attack on New Year’s followed more than 30 in Turkey during 2016, a member of the NATO alliance and a partner in the U.S.-led coalition fighting against the Islamic State group in Syria and Iraq. Last week, Turkish President Recep Tayyip Erdoğan announced he and Russian President Vladimir Putin had successfully brokered a ceasefire in Syria.

In December, ISIS released what could be their most barbaric video to date, showing the group burning two Turkish soldiers alive. They urged supporters to “conquer” Istanbul and claimed to have cells in the country. ISIS also bore responsibility for suicide bombings last January and March that targeted tourists on Istanbul’s iconic Istiklal Street as well as the attack at Ataturk Airport in June, which killed 45 people.

With the increased number of terror attacks over the past year, security had been heightened in Turkish cities, with police barring traffic leading up to key squares in Istanbul and the capital Ankara. In Istanbul, alone, some 17,000 police officers were on duty at the time, some of them disguised as Santa Claus and others as street vendors.

Prime Minister Binali Yildirim said the terrorist left a gun at the club and was able to escape by “taking advantage of the chaos” that followed the shooting. Authorities believe he changed his clothes before exiting the club. Some customers reportedly jumped into the freezing waters of the Bosporus to escape the hail of bullets. Sources tell People’s Pundit Daily that authorities believe the gunman comes from a Central Asian nation, likely Uzbekistan or Kyrgyzstan.