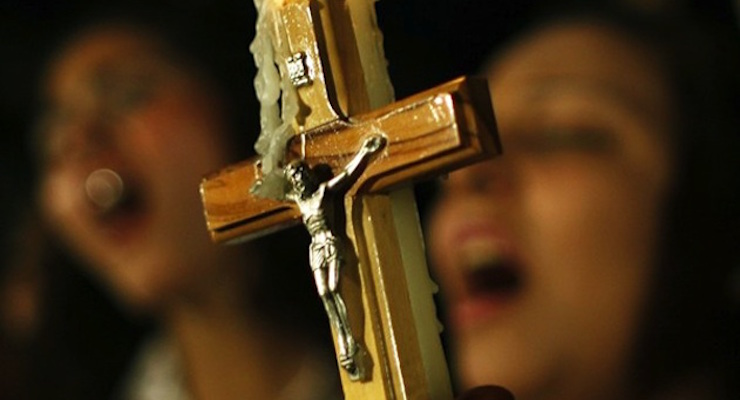 Christian persecution in the Middle East and worldwide is on the rise. Coptic Christians in Egypt worship (above), but are becoming all but extinct at the hands of Islamists. (Photo: AP)

Islamic State (ISIS) claimed responsibility for twin bombings at two Coptic Christian churches in Egypt on Palm Sunday, killing 37 and wounding some 100. The first bombing happened at St. George church in the Nile Delta town of Tanta, while the second at St. Mark’s Cathedral in the coastal city of Alexandria, Egypt.

“Either a bomb was planted or someone blew himself up,” provincial governor Ahmad Deif told the state-run Nile TV channel.

The group took credit on its Aamaq media agency recently releasing a video vowing to step up attacks against Christians in the region, who the group describes as “infidels” empowering the West against Muslims. Coptic Christians, who make up only 10% of the population now, have been repeatedly targeted by Islamic terrorists. While some estimates vary, they were once roughly 23% of the population.

“God gave orders to kill every infidel,” one of the militants carrying an AK-47 assault rifle says in the 20-minute video.

Grand Sheikh Ahmed el-Tayeb, the head of Al-Azhar–the leading center of learning in Sunni Islam in Egypt–called the attacks a “despicable terrorist bombing that targeted the lives of innocents.”

U.S. Ambassador Nikki Haley: Any Nation Defending Syria Will Do So in Public