HomeOpinionHypocrisy Update: Leftists Want the Peasants (Not Themselves) to Endure Big Government

Hypocrisy Update: Leftists Want the Peasants (Not Themselves) to Endure Big Government 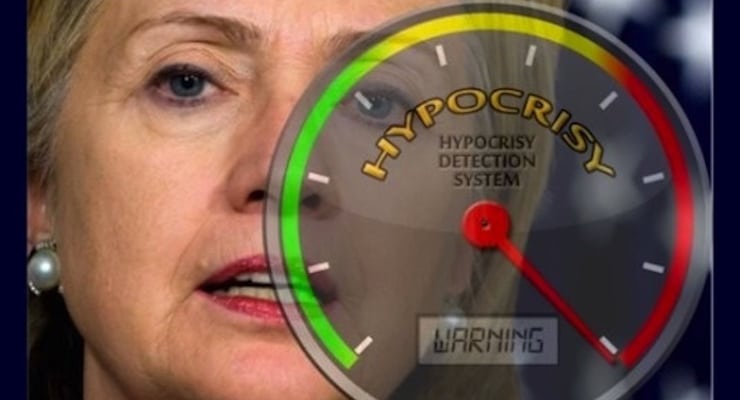 I wrote last month about Secretary of State John Kerry being a giant hypocrite because he’s been a critic of so-called tax havens, yet he and his family benefits immensely from investments in various low-tax jurisdictions.

But perhaps that’s something that Barack Obama requires when selecting people for that position. It turns out that Kerry’s predecessor also utilized tax havens.

Earlier this year, the New York Post editorialized about Hillary Clinton’s attack against tax havens, which they found to be absurd since the Clinton family benefits significantly from places such as the Cayman Islands.

Hillary Clinton last week lunged into her most flagrant fit of hypocrisy yet. …she took new aim at the rich — including their use of tax dodges. She told MSNBC: “We can go after some of these schemes … the kind of…routing income through the Bahamas or the Cayman Islands or wherever.” Huh. …the Clintons’ family wealth has grown big-time thanks to firms with significant holdings in places like . . . the Caymans. As The Daily Caller notes, Bill Clinton spent years as a partner in his (now-ex-) buddy Ron Burkle’s investment fund Yucaipa Global — registered in the Cayman Islands. …It’s a family thing: Chelsea Clinton’s hubby, Marc Mezvinsky, is a partner in a hedge fund with multiple holdings incorporated in the Cayman Islands.

This isn’t to criticize Cayman, by the way. It’s one of the best jurisdictions in the world if you want high levels of honest governance and very sensible tax and regulatory policies.

But shouldn’t politicians practice what they preach? So why aren’t Kerry and Clinton instead investing in France or Greece to show their support for high tax burdens?

By the way, the editorial also cited the Clinton family’s house, which is owned by a trust to help dodge the death tax, something that I also called attention to back in 2014.

Let’s shift from taxes to the environment. Writing for Real Clear Politics, Ed Conard takes aim at the moral preening of Leonardo DiCaprio.

Time Magazine released its list of the top 100 Most Influential People and placed Leonardo DiCaprio on the cover of its magazine for the personal example he sets on climate change. How Ironic! …According to the leaked Sony documents for example, DiCaprio took six private roundtrip flights from Los Angeles to New York over a 6-week period and, a private jet to the 2014 World Economic Forum in Davos Switzerland. Pictures of him vacationing on big yachts… What hypocrisy! He enjoys the very luxuries that he admonishes others not to indulge.

Oh, wait, he buys carbon offsets, the modern version of purchasing an indulgence.

But Mr. Conard is not very impressed by that bit of moral preening.

So who really paid for DiCaprio’s grossly polluting ways? The rest of the world of course, not DiCaprio. …A person’s consumption is their true cost to the rest of society, not their income, nor their unspent wealth. Does the tax DiCaprio imposes on himself for polluting the world reduce his polluting consumption? Hardly! In fact, it encourages more of it. …DiCaprio, and others like him, buy carbon offsets to sooth their guilt—guilt they never needed to incur in the first place. …they sooth their guilt by voting to spend someone else’s income helping others. They think they have done a good deed when they have really done nothing at all.

I’m not sure I agree that carbon is pollution, and I also don’t like referring to consumption as a cost, but he’s right on the money about DiCaprio being a fraud or a phony (something that Michelle Fields exposed in a recent interview).

Let’s now shift back to taxes.

When I was in Montreal last year for a conference on tax competition, one of the highlights was hearing Governor Sam Brownback talk about his pro-growth tax policy. My least favorite part of the conference, by contrast, was hearing Margaret Hodge, a politician from the United Kingdom, pontificate about the evils of tax avoidance.

And the reason that was such an unpleasant experience is that she’s a glaring hypocrite. Here are some excerpts from a report published by the International Business Times.

Labour’s Margaret Hodge was, according to The Times, among the beneficiaries in 2011 of the winding-up of a Liechtenstein trust that held shares in the private steel-trading business set up by her father. The Times reports that just under 96,000 Stemcor shares handed to Hodge in 2011 came from the tiny principality, which is renowned for low tax rates. Three quarters of the shares in the family’s Liechtenstein trust had previously been held in Panama, which Ms Hodge described last month as “one of the most secretive jurisdictions” with “the least protection anywhere in the world against money laundering”.

Let’s close by identifying one more hypocritical “champagne socialist” from the United Kingdom, as reported by the U.K.-based Telegraph.

Dame Vivienne is now accused of hypocrisy over tax avoidance allegations that put her in direct conflict with one of the Green Party’s main policies. The most recent company accounts show Dame Vivienne’s main UK business is paying £2 million a year to an offshore company set up in Luxembourg for the right to use her name on her own fashion label. Tax experts have described the arrangement as “tax avoidance” that cheats the UK Treasury out of about £500,000 a year. The model is similar to one used by Starbucks, the coffee chain, which found itself at the centre of a protest over its use of Luxembourg to reduce its tax bill in the UK. …One City accountant, who studied the accounts of Vivienne Westwood Ltd, said: “This has to be tax avoidance. Why else would you make these payments to a company in Luxembourg? It makes the Green Party hypocrites for taking her money and Westwood a hypocrite for backing a party with policies she does not appear to endorse.”

So we can add Ms. Hodge and Ms. Vivienne to the list of American leftists who also utilize tax havens to minimize their tax burdens.

And all of the people above, as well as those above, will be charter members of the Statist Hall of Fame whenever I get around to setting up that page.

And there are a lot more that deserve to be mocked for their statist hypocrisy.