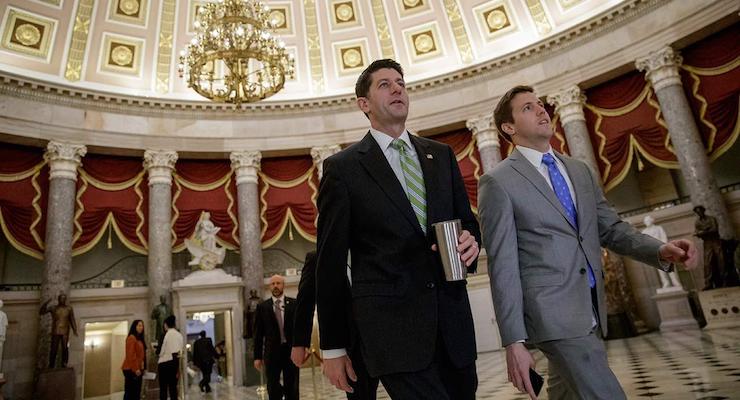 Fundamental tax reform such as a flat tax should accomplish three big goals.

The good news is that almost all Republicans believe in the first two goals and at least pay lip services to the third goal.

The bad news is that they nonetheless can’t be trusted with tax reform.

A reform plan doesn’t have to be “revenue neutral,” of course, but politicians would be very reluctant to vote for a package that substantially reduced tax revenue. So serious proposals have revenue-raising provisions that are roughly similar in magnitude to the revenue-losing provisions.

Here’s the problem.   Notwithstanding lip service, Republicans are not willing to go after major tax loopholes like the healthcare exclusion. And that means that they are looking for other sources of revenue. In some cases, such as the proposal in the House plan to put debt and equity on a level playing field, they come up with decent ideas. In other cases, such as the border-adjustment tax, they come up with misguided ideas.

And some of them are even talking about very bad ideas, such as a value-added tax or carbon tax.

This is why it would be best to set aside tax reform and focus on a more limited agenda, such as a plan to lower the corporate tax rate. I discussed that idea a few weeks ago on Neil Cavuto’s show, and I echoed myself last week in another appearance on Fox Business.

Lest you think I’m being overly paranoid about Republicans doing the wrong thing, here’s what’s being reported in the establishment press.

The Hill is reporting that the Trump Administration is still undecided on the BAT.

The most controversial aspect of the House’s plan is its reliance on border adjustability to tax imports and exempt exports. …the White House has yet to fully embrace it. …If the administration opts against the border-adjustment proposal, it would have to find another way to raise revenue to pay for lowering tax rates.

While I hope the White House ultimately rejects the BAT, that won’t necessarily be good news if the Administration signs on to another new source of revenue.

And that’s apparently under discussion.

The Washington Post last week reported that the White House was looking at other ideas, including a value-added tax and a carbon tax… Even if administration officials are simply batting around ideas, it seems clear that Trump’s team is open to a different approach.

The Associated Press also tries to read the tea leaves and speculates whether the Trump Administration may try to cut or eliminate the Social Security payroll tax.

The administration’s first attempt to write legislation is in its early stages and the White House has kept much of it under wraps. But it has already sprouted the consideration of a series of unorthodox proposals including a drastic cut to the payroll tax, aimed at appealing to Democrats.

I’m not a big fan of fiddling with the payroll tax, and I definitely worry about making major changes.

Why? Because it’s quite likely politicians will replace it with a tax that is even worse.

This would require a new dedicated funding source for Social Security. The change, proposed by a GOP lobbyist with close ties to the Trump administration, would transform Brady’s plan on imports into something closer to a value-added tax by also eliminating the deduction of labor expenses. This would bring it in line with WTO rules and generate an additional $12 trillion over 10 years, according to budget estimates.

Last but not least, the New York Times has a story today on the latest machinations, and it appears that Republicans are no closer to a consensus today than they were the day Trump got inaugurated.

…it is becoming increasingly unlikely that there will be a simpler system, or even lower tax rates, this time next year. The Trump administration’s tax plan, promised in February, has yet to materialize; a House Republican plan has bogged down, taking as much fire from conservatives as liberals… Speaker Paul D. Ryan built a tax blueprint around a “border adjustment” tax… With no palpable support in the Senate, its prospects appear to be nearly dead. …The president’s own vision for a new tax system is muddled at best. In the past few months, he has called for taxing companies that move operations abroad, waffled on the border tax and, last week, called for a “reciprocal” tax that would match the import taxes other countries impose on the United States.

The report notes that Trump may have a personal reason to oppose one of the provisions of the House plan.

Perhaps the most consequential concern relates to a House Republican proposal to get rid of a rule that lets companies write off the interest they pay on loans — a move real estate developers and Mr. Trump vehemently oppose. Doing so would raise $1 trillion in revenue and reduce the appeal of one of Mr. Trump’s favorite business tools: debt.

From my perspective, the most encouraging part of the story is that the lack of consensus may lead Republicans to my position, which is simply to cut the corporate tax rate.

With little appetite for bipartisanship, many veterans of tax fights and lobbyists in Washington expect that Mr. Trump will ultimately embrace straight tax cuts, with some cleaning up of deductions, and call it a victory.

And I think that would be a victory as well, even though I ultimately want to junk the entire tax code

and replace it with a flat tax.

P.S. In an ideal world, tax reform would be financed in large part with spending restraint. Sadly, Washington, DC, isn’t in the same galaxy as that ideal world.

P.P.S. To further explain why Republicans cannot be trusted, even if they mean well, recall that Rand Paul and Ted Cruz both included VATs in the tax plans they unveiled during the 2016 presidential campaign.