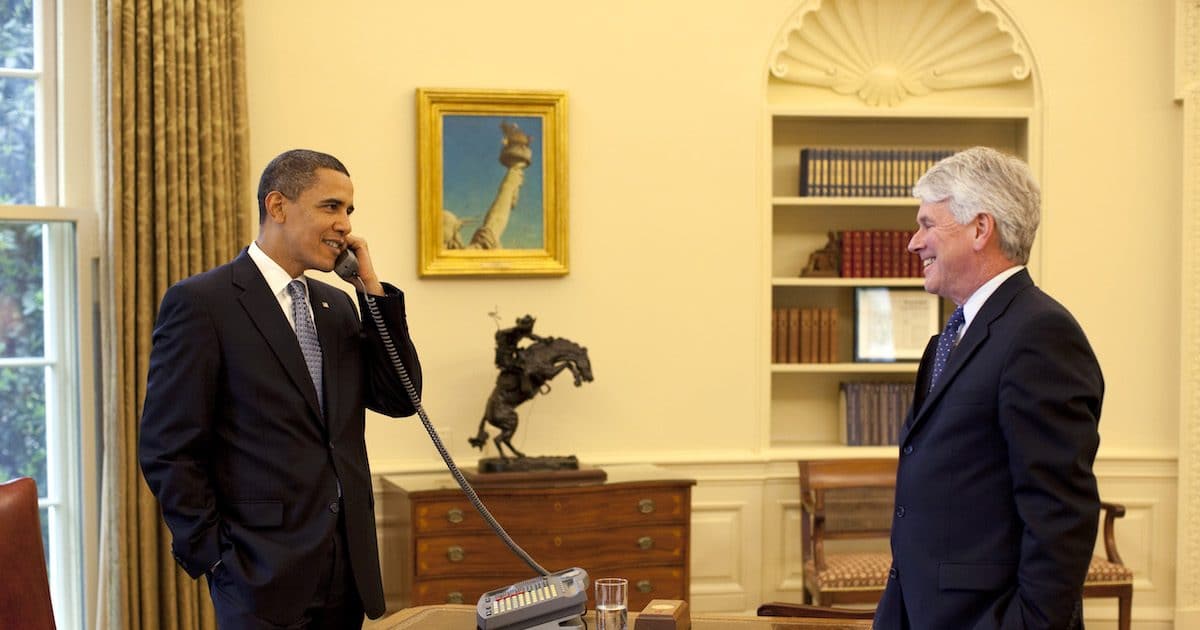 In a move sending ripples throughout Washington, the Justice Department (DOJ) indicted President Obama’s former White House Counsel Gregory Craig on Thursday, April 11. Craig was charged with lying to investigators and violating the Foreign Agents Registration Act, also known as FARA. The DOJ’s FARA enforcement efforts appear to be ramping up and political spectators should not be surprised if major Democrat players are next to feel the heat.

Experts believe that Craig’s indictment will trigger “shock waves” through legal circles given Craig’s ties to former Trump campaign chairman Paul Manafort and, by extension, the Trump administration. What remains underreported is the fact that the Ukrainian trail of influence that implicates Manafort and Craig leads directly to Obama and former Secretary of State Hillary Clinton.

Craig, a longtime Clinton friend and Democrat powerbroker, left the Obama White House in January 2010 and joined the international law firm Skadden, Arps, Slate, Meagher & Flom LLP. Prosecutors allege that Craig lied about Skadden’s work on behalf of former Ukrainian President Viktor Yanukovych and that he failed to disclose his activities between 2012 and 2013, as required by FARA. If convicted, Craig faces up to five years in prison for each charge against him.

In 2012, Craig and his team from Skadden were hired to investigate the controversial imprisonment of Yanukovych’s opponent, Yulia Tymoshenko. The report that Craig’s team produced was deemed favorable to Yanukovych and was used to foster support for the Ukrainian leader. Craig, the Podesta Group lobbying firm, and others promoted or otherwise coordinated the report’s public relations strategy, which implies FARA activity. The Podesta Group bagged more than $1.2 million from a pro-Yanukovych group. To date, none of the firm’s principals have been charged with any crimes.

In a statement released on the day of the indictment, Craig revealed that a longtime pollster for the Clintons, Doug Schoen, was the one who introduced him to the Ukrainian project—not Manafort as has been widely reported. Craig also revealed that Ukrainian oligarch Victor Pinchuk paid Skadden more than $4 million for the Ukrainian efforts. The indictment refers to Pinchuk as a wealthy “Private Ukrainian” and alleges that “A truthful and complete FARA registration by CRAIG would have made a public record of [Pinchuk’s] role in funding the report, and the amounts he paid to the Law Firm.”

Pinchuk, a longtime ally of Yanukovych, first hired Schoen as a consultant in 2000 and paid him $40,000 per month. Schoen registered as a lobbyist for Pinchuk in 2011 and met with Obama administration officials to advance Pinchuk’s agenda. Between September 2011 and November 2012, Schoen arranged “roughly a dozen meetings” for Pinchuk with the Clinton State Department, according to the New York Times. Whether or not Schoen’s relationship with Pinchuk should trigger FARA disclosure remains unclear.

Schoen reportedly introduced Pinchuk to Bill Clinton in 2004. Pinchuk’s foundation has since donated as much as $25 million to the Clinton Foundation. Furthermore, Pinchuk’s meetings with Clinton Foundation personnel and senior officials at Clinton’s State Department sometimes overlapped. In 2012, Pinchuk met with Hillary Clinton’s close aide, Melanne Verveer, in a hotel suite on the fringes of the Clinton Global Initiative meeting in New York. This occurred while Craig and Manafort were allegedly lobbying as Pinchuk’s unregistered foreign agents.

The connections between Craig, Schoen and Pinchuk are significant, as are their ties to both the Clintons and the Podestas. Since Craig and Manafort were charged with violating FARA based on their relationship with Pinchuk, then Schoen, the Podesta Group, and the Clinton Foundation also warrant deeper FARA investigations. The Clinton Foundation has been widely accused of major FARA violations as numerousforeign governments donated lavish sums while Clinton was secretary of state.

Emails obtained by Wikileaks reveal that Clinton staffers debated internally about accepting FARA-linked contributions during the 2016 campaign. A staffer specifically mentioned that the Podesta Group’s representation of Iraq, Azerbaijan, and Egypt might raise red flags.

Ultimately, the campaign decided to “Take the money!!” Likewise, the Podesta Group has been accused of violating FARA in the past and criticized over the massive fees that foreign principals from Saudi Arabia and Russia and elsewhere paid the firm to lobby the Obama White House.

The Clinton Foundation’s and the Podesta Group’s power and influence in Washington have waned in the Trump era and their exposure to FARA is finally coming into focus.While Clinton and her allies have always seemed keen to “take the money,” many such payments are now facing intense scrutiny and unforeseen consequences.

In April 2017, the Podesta Group retroactively disclosed their Ukrainian lobbying efforts—roughly five years late and only after investigations had begun. The firm’s co-founder, Tony Podesta, stepped down six months later. Two weeks after Podesta stepped down, CEO Kimberly Fritts told employees that the firm would be closing for good on November 11. Fritts gave employees less than one week to clean out their desks. The Podesta Group may still be under investigation by the DOJ’s FARA division.

The DOJ had been widely criticized in recent years due to lax FARA enforcement. FARA filings plummeted in the mid-1990s under the Clinton administration when changes to the statute effectively created incentives not to file—including the imposition of fees and a loophole to avoid disclosure.

The FARA charges against Craig and Manafort, among other individuals, signal an abrupt departure from the DOJ’s longstanding lull. The results are positive and undeniable.

After Manafort was indicted and effectively “perp-walked,” FARA registrations skyrocketed. Craig resigned from Skadden last year and the firm was slapped with a $4.6 million penalty by the DOJ in January for the undisclosed Ukrainian activity. As part of that settlement, Skadden agreed to retroactively disclose their activity to the DOJ’s FARA division.

The recent FARA indictments provide a clear solution to rampant shady behaviors for which Washington has earned its nickname, “the Swamp.” Individuals found guilty of skirting FARA—among myriad other serially abused statutes—must be held accountable, publicly. Sunlight is, as always, the greatest disinfectant and the sooner justice is served, the better.

Seamus Bruner is the associate director of research at the Government Accountability Institute and author of “Compromised: How Money and Politics Drive FBI Corruption.”

Seamus Bruner is the associate director of research at the Government Accountability Institute and author of “Compromised: How Money and Politics Drive FBI Corruption.”

The Federal Reserve Should Have Less Power, Not More Power

The Immorality of Socialism