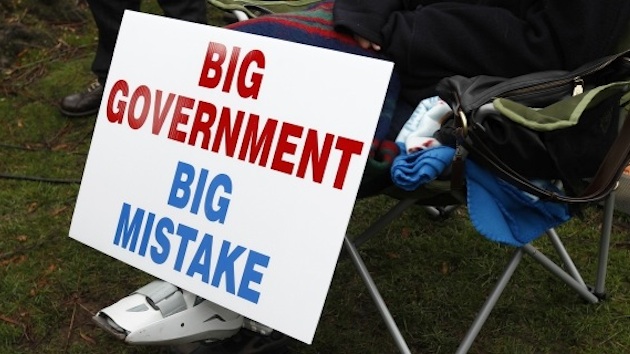 A protestor rests next to their big government big mistake sign. (Photo: REUTERS)

There’s an old saying that you shouldn’t bite the hand that feeds you. Unfortunately, politicians in Washington don’t follow that advice.

Let me explain. All economic theories – even Marxism and socialism – agree that capital formation is a necessary condition for long-run growth and higher wages.

Marxists and the socialists are misguided in thinking that government has the capacity to be in charge of saving and investing, but at least they recognize that you have to set aside some of today’s income to finance tomorrow’s growth. And they even understand that capital formation leads to more productivity and higher wages.

The politicians, however, act as if they don’t understand the importance of saving and investment. Or, based on the policies we get from Washington, maybe they simply don’t care about the well-being of workers, savers, and investors.

Which is a very short-sighted attitude since capital formation leads to a bigger tax base (i.e., more income that they can tax), which is something they presumably should care about!

I’m pondering this conundrum because of a thought-provoking column. Writing for the Wall Street Journal, Thomas Duesterberg and Donald Norman explore the very important question of why corporations are in very strong shape while investment is lagging.

Corporate profits and cash flow are strong, cash on the books of American firms is at record highs… Yet capital investment, which is one of the main pillars of growing productivity and rising living standards, is historically weak. …In 2014, real gross domestic product was 8.7% above the level it reached just before the onset of the great recession in late 2007, …yet gross private investment was just 3.9% higher. Private investment net of depreciation—an even better measure of keeping up production and innovation capacity—was $524 billion in 2013 (the last year for which we have good data), compared with $860 billion in 2006.

Why is this a problem?

So why has investment been weak?

You shouldn’t be surprised to learn that bad government policy is at the top of the list. Having the world’s highest corporate tax rate obviously doesn’t help.

…one clear factor—noted by many economic analysts—is corporate tax rates, including effective tax rates. These rates can sway decisions about where companies locate new production or research facilities.

Regulation is also a growing burden. For example, a 2012 study by NERA Economic Consulting notes that the number of major regulations in the manufacturing sector has grown at the compound annual rate of 7.6% since 1998, compared with only 2.2% average annual growth in GDP. …in the World Economic Forum’s annual “Global Competitiveness Report.” …in the category for “burden of government regulation” the latest report ranks the U.S. 82nd of 144.

America also is falling behind in trade.

More than 400 regional free trade agreements have come into effect since 1995, but the United States is party to just two of these and to 10 smaller-scale bilateral agreements. Europe has 38 separate FTAs, and Mexico has added Europe and all of Latin America to its arsenal, which is one reason cited by Audi recently in locating its newest plant there instead of in the U.S.

Last but not least, the overall policy environment in Washington is creating “regime uncertainty.”

A number of studies—including one at Stanford led by Nicholas Bloom and Scott Baker, and at the University of Chicago led by Steven Davis—have employed sophisticated models to chart what is seen as a secular trend in growth of uncertainty that is tied to growth in government regulation, spending, taxes…major shifts in monetary policy probably also contribute to uncertainty.

In other words, investment is lagging both because of the bad policies that have been imposed and because of the expectation/fear that there will be additional burdens coming from Washington.

So we shouldn’t be surprised that corporations are sitting on record piles of cash. Simply stated, it doesn’t make much sense to invest if there’s little hope of future profits.

And don’t be surprised that banks also are sitting on record piles of cash for the same reason.

When I share this kind of information with some of my leftist friends, I frequently get a visceral response about how they won’t shed any tears just because there are fewer profitable opportunities for “fatcat investors” and “rich corporations.”

That reaction doesn’t bother me, at least in the sense that I never lose sleep about the financial health of Warren Buffett or General Electric.

But then I ask my statist friends whether we should be concerned about the “collateral damage” that occurs when lower levels of investment result in less productivity growth, which translates into stagnant wages for ordinary Americans.