HomePolicyWill SCOTUS Gay Marriage Ruling Legalize Polygamy, And Should We Even Care If It Does? 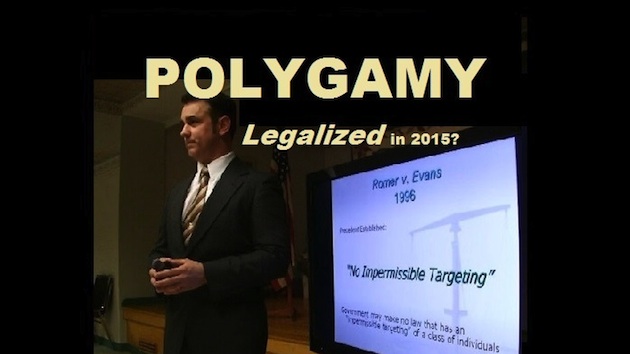 On Apr 28, 2015, the Supreme Court heard oral arguments on four same-sex marriage cases collectively referred to as Obergefell v. Hodges. The SCOTUS gay marriage ruling, which is expected to be handed down sometime in June, will essentially contribute to a national debate over an issue found nowhere in the U.S. Constitution — marriage.

Though we often simplistically break down the case to whether or not the Supreme Court will legalize same-sex marriage, the following two questions were before the court.

1) Does the Fourteenth Amendment require a state to license a marriage between two people of the same sex?

2) Does the Fourteenth Amendment require a state to recognize a marriage between two people of the same sex when their marriage was lawfully licensed and performed out-of-state?

But, in fact, even analyzing the issue and applying the case in terms of same-sex marriage alone, is inaccurate. The Obergefell v. Hodges ruling could not only change the definition of marriage, as most conservatives dread it will, but also alter the more fundamental relationship between the individual and the State (federal). The former often receives attention in the media, but the latter is blatantly ignored by all sides in this debate.

These are the two distinctions we will make in this article, which will address whether a Supreme Court ruling in favor of same-sex marriage could inadvertently legalize or de-criminalize polygamy, and whether or not Americans, particularly conservative Americans, should even care if it does.

Recently, I twice had the chance to speak with Mark Henkel, the established National Polygamy Advocate™ to discuss the upcoming Supreme Court decision in Obergefell v Hodges and what it could mean for polygamists in America. Henkel, who is no Mormon, considers himself a limited government conservative and makes a legal case in favor of polygamy. In fact, in what might fairly be considered a more conservative argument than the Tenth Amendment-based argument made by proponents of tradition marriage, he makes the case marriage between consenting adults should be absent of government control outside of the necessary municipal level.

“What both sides are really doing is marriage control.”

To be sure, what lawyers arguing in favor of same-sex marriage asked the Supreme Court to do during oral arguments was to give same-sex couples preferential status over others. Justice Samuel Alito, a conservative on the court, was clearly concerned that legalizing same-sex marriage would also legalize polygamy.

Mary Bonauto, of the Massachusetts-based Gay & Lesbian Advocates & Defenders (GLAD) who argued for same-sex marriage, replied that a state has justifiable concerns regarding consent and coercion in a polygamist union that isn’t present in gay marriage unions. She also argued that with polygamy there are concerns about who would make medical decisions, and other complicated decisions.

In other words, polygamist unions aren’t between consenting adults and, because they entered into polygamy, one or more of those individuals must necessarily be of lower intelligence and have less decision-making skills than gays and lesbians. As far as a “justifiable state interest” in legal contracts between multiple consenting adults, shared custody battles could and would play out the same in court depending upon the best interest of the child(ren), employer benefits could easily be extended with a simple and fair premium, while inheritance would likely be outlined in a will. If not, again, a court would determine the wishes of the deceased just as it is with ex-spouses, family members or other divided parties.

It’s a ridiculous argument, but one Bonauto was forced to make. Regardless of the concerted effort by same-sex marriage activists and Ms. Bonauto to regurgitate these themes, none of the aforementioned considerations have anything to do with the Fifth and Fifteenth Amendment concerns, as Henkel notes. And he isn’t the only one to think as much.

“The Court’s disposition today suggests that these provisions are unconstitutional,” Justice Antonin Scalia wrote in his dissenting opinion to Romer v. Evans (1996). He added “that polygamy must be permitted in these States on a state-legislated, or perhaps even local-option, basis — unless, of course, polygamists for some reason have fewer constitutional rights than homosexuals.”

The decision in Romer v. Evans set the precedent for the ruling in Lawrence v. Texas (2003), the case used by the Supreme Court to overrule its prior decision in Bowers v. Hardwick (1986), when the Supreme Court had held that laws criminalizing sodomy were constitutional. It, ultimately, set the stage for the Supreme Court ruling in United States v. Windsor (2013), which struck down Section 3 of the Defense of Marriage Act sign by Democratic President Bill Clinton.

Either the Supreme Court rules there is a specific right to marriage for gay couples — and, consequently discriminates against other consenting adults — or it finds a general right to marriage that would apply to all consenting adults. Such a ruling, and only such a ruling, would satisfy the Fifth- and Fourteenth-Amendment concerns cited by Justice Anthony Kennedy in his Windsor opinion.

“DOMA is unconstitutional as a deprivation of the liberty of the person protected by the Fifth Amendment of the Constitution,” Justice Kennedy wrote in the majority opinion. “By seeking to displace this protection and treating those persons as living in marriages less respected than others, the federal statute is in violation of the Fifth Amendment. This opinion and its holding are confined to those lawful marriages.”

Of course, it is entirely possible that the Supreme Court skirts the issue of polygamy and makes some obscure attempt to temporarily dismiss the issue, altogether. However, given Kennedy’s position on the Tenth Amendment, Henkel and many legal experts find it difficult to imagine a ruling that declares a specific right to marriage only for same-sex and traditional couples.

The Tenth Amendment reads as follows:

The powers not delegated to the United States by the Constitution, nor prohibited by it to the States, are reserved to the States respectively, or to the people.

Considering that the issue of marriage is not explicitly mentioned anywhere in the U.S. Constitution, the Tenth Amendment requires it to be “reserved to the States respectively, or to the people.” Of course, traditional marriage proponents hope Kennedy comes down on the side of the states as a “collective” of the people, rather than interpret “to the people” as an implicit general right of the individual. If not, Henkel will be ready with a conservative-based response.

“Conservatives are going to go spastic,” he said. “I am going to say come home to your values. abolish marriage control at the state level. The only level of government needed to keep a public record is at the municipal level.”

However, it is true that Henkel may not get the ruling he hopes for, but the same is true for proponents of traditional and gay marriage. Despite what we’ve heard from the media following the DOMA and Proposition 8 cases, there is no reason to believe any side should be overconfident.

“But those positive rulings make it easy to miss signals that the Court is not yet ready to announce a constitutional right to same-sex marriage before the states fully consider the issue,” says Tom Goldstein of SCOTUS Blog. “Presented with the perfect chance to issue a sweeping ruling in the California case, the Justices ducked and instead dismissed it on procedural grounds.”

While I endorse no side of any of the arguments made by the interested parties above, it is my intention to highlight that media coverage and their partisan, pundit-based legal analysis have done a serious injustice to the American people. Debate over the potential outcomes in Obergefell v. Hodges has been shallow and intellectually dishonest. When debating an inevitable ruling that has the potential to not only impact the culture of today and tomorrow but also fundamental principles to American political philosophy, Americans deserve more.

Cultural norms and public opinions evolve over time, swinging back-and-forth like a political pendulum. They are often the opposite of a grounded, guiding moral compass. Founding principles are, should be and must remain, absolute.